MLB and MLBPA Say Lawsuit Over Cancellation of Atlanta All-Star Game Is Meritless, ‘Frivolous,’ Politically Motivated and ‘Clearly Deficient in All Respects’ 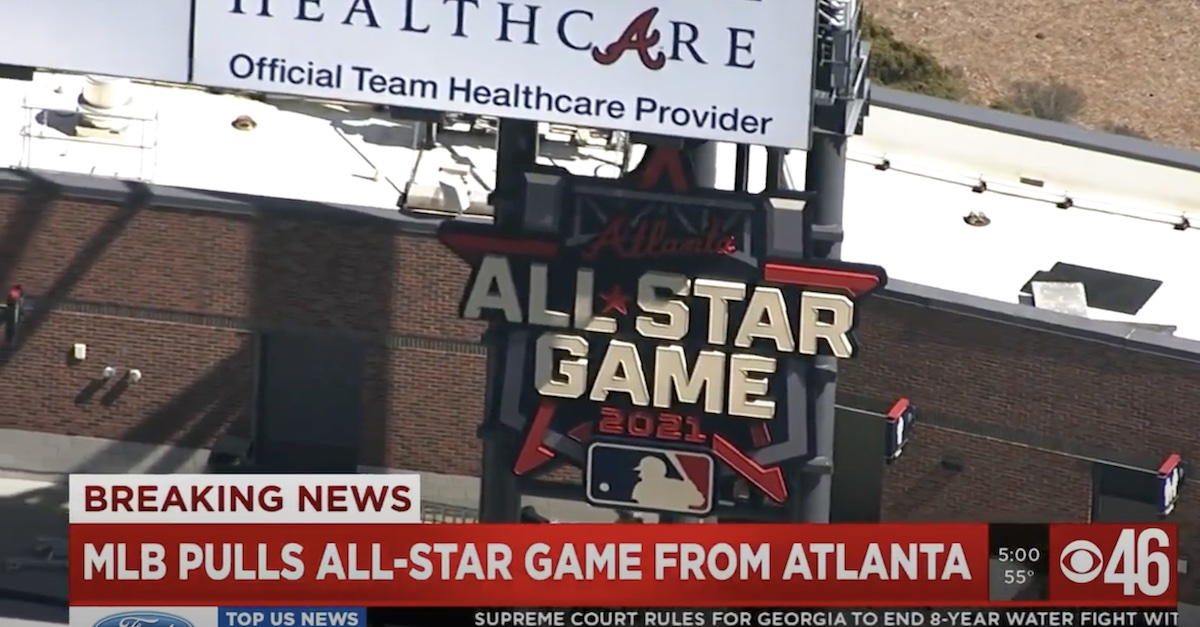 Major League Baseball, its Commissioner Rob Manfred, and the MLB Players Association (MLBPA) responded to a lawsuit that was filed by the Job Creators Network (JCN), a conservative advocacy group that asked a federal judge last week to order MLB to move the 2021 MLB All-Star Game back to Atlanta. The defendants say that JCN may call itself “nonpartisan,” but filed the meritless lawsuit for political reasons.

In case you missed it last week, lawyer Howard Kleinhendler (who was part of the so-called “Kraken” legal team that attempted to reverse the 2020 election outcome) sued MLB on behalf of JCN, a group founded by former Home Depot CEO Bernie Marcus. The lawsuit was an attempt to reverse MLB’s decision to move the All-Star Game from Atlanta to Denver, Colorado in the wake of Georgia’s new voting law, which opponents have called SB 202 “voter suppression bill” meant to appease “conspiracy theorists” upset about the 2020 election outcome.

Both MLB and MLBPA (the players union) chalked up the lawsuit to political theatre; the latter defendants even called the lawsuit “frivolous.”

The JCN lawsuit claimed that MLB was actually a “state actor acting under the color of law,” which “conspired” to violate Georgians’ civil rights in violation of the Equal Protection Clause of the Fourteenth Amendment and the Privileges and Immunities Clause of Article IV of the Constitution.

“Most if not all MLB clubs are state actors acting under color of law as recipients of substantial state and local financing and as tenants of stadiums owned by state and local authorities,” the suit claimed. “This public involvement ties the MLB clubs to constitutional requirements like the Equal Protection Clause, as it does for other sufficiently involved public tenants. Indeed, Truist Park, home of the Atlanta Braves, was constructed with substantial funding from Cobb County.”

Based on this this novel “state actor” theory, the suit claimed that MLB “violated federal rights protected by 42 USC §1983” because the league “intended to punish Georgians because their state enacted a reasonable ballot-integrity statute and to coerce Georgia and its duly elected government to surrender Georgia’s sovereignty in our federal system.” The suit even alleged a violation of the Civil Rights Act of 1871, also known as the Ku Klux Klan Act, which makes it a crime to “conspire to prevent, by force, intimidation, or threat, any person from accepting or holding any office, trust, or place of confidence under the United States, or from discharging any duties thereof.”

The defendants responded by saying that there is no conspiracy here, that the plaintiffs have no standing, and—even if they did—it is not in the public interest for a federal judge to order a private business to do business in Atlanta.

JCN has “failed to meet the requirements for preliminary injunctive relief,” MLB said. “There is the obvious lack of irreparable injury, as well as the lack of any merit to JCN’s claims.”

“JCN does not allege that it or its members are in imminent danger of sustaining some concrete injury as a direct result of MLB’s decision to move the All-Star Game from Atlanta to Denver. Without that, JCN lacks Article III standing to seek injunctive relief,” MLB continued. “Even if JCN had standing to pursue its claims (which it does not), or had sufficiently pled the irreparable injury required to support a preliminary injunction (which it has not), its motion still should be denied because JCN plainly cannot demonstrate a ‘clear’ or ‘substantial’ likelihood of success on the merits of its claims. Indeed, its claims are clearly deficient in all respects.”

MLB said that if JCN’s logic were to be accepted, every state that did not get to host the MLB All-Star Game in a given season could claim their constitutional right to host an all-star game (which does not exist) was violated:

Taken to its logical extreme, JCN’s reading of the Privileges and Immunities Clause would mean that citizens of every state in which MLB chose not to hold the All-Star Game in a given year would have a claim that their constitutional rights were violated because they were not treated in the same way as citizens of the state where the game was being held. (See Br. at 12– 13.) Indeed, by JCN’s logic, a political party moving its convention from one state to another would give rise to constitutional claims, as would a popular music artist skipping a state on a concert tour. That cannot be correct.

To support claims of political motivation, MLB said that JCN’s mission statement includes a political component, that the group has “promot[ed] unapproved COVID-19 treatments,” and that JCN has “attacked” Rep. Alexandria Ocasio-Cortez (D-N.Y.) and the “Green New Deal” in billboard ads.

Plaintiff JCN describes itself as a “nonpartisan organization” whose mission is to “provide[] business leaders and entrepreneurs with the tools to become the voice of free enterprise in the media, in Congress, in state capitals, in their communities, and their workplaces—allowing them to hold politicians accountable to job creators and their employees.” JCN’s activities are often covered in the media; for example, JCN recently received attention for promoting use of unapproved COVID-19 treatments5 and for putting up billboards attacking a New York congresswoman.

As for the MLBPA, it responded to the “frivolous” suit by saying neither MLBPA nor Executive Director Tony Clark played any role in deciding where the All-Star Game would be located or relocated.

Neither the Major League Baseball Players Association (“MLBPA”) nor its Executive Director decides where to play the All-Star Game. They did not decide to locate the 2021 All-Star Game in Atlanta, they did not decide whether or where to relocate the game, and they have no ability to return it to Atlanta. The Job Creators Network (“JCN” or “Plaintiff”) knows this. It filed this lawsuit for political theater and then doubled down on abuse of the judicial process by dragging the MLBPA and its Executive Director, Tony Clark, into a frivolous lawsuit.

MLBPA also said that there is no “conspiracy” to violate the rights of a protected class:

Plaintiff has also failed to plausibly plead—much less prove a clear likelihood of success— as to any claim. The Section 1985 count fails at the threshold because the MLBPA did not participate in any “conspiracy” to move the All-Star Game. As the MLB collective bargaining agreement and Constitution establish, MLB and its Clubs—not the MLBPA—determine where to hold the game. Nor does Plaintiff even attempt to argue how moving a baseball game deprives or hinders a constitutional right, or was animated by a discriminatory bias.

What’s more, MLBPA continued, the JCN suggestion that MLBPA is actually the party who conspired to harm Black people is both “sanctionable” and “detached from reality.” 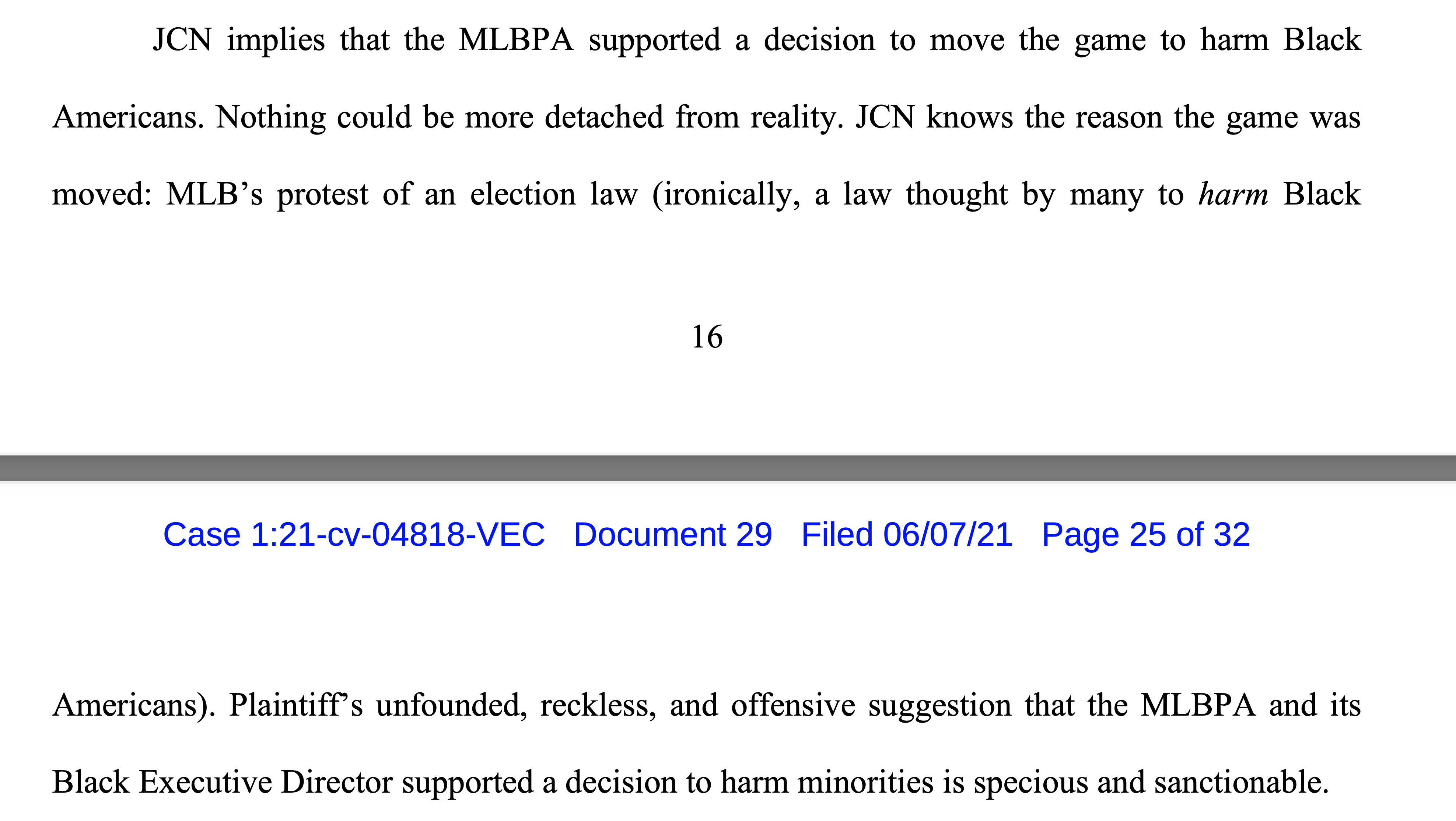 “In any event, JCN’s interference claims mostly concern President Biden—not anything the MLBPA (or MLB) did,” the filing said, before delivering a final blow: “The Founding Fathers did not bestow upon American cities the right to an MLB All-Star Game.”

Read the documents below, which ask a federal judge to deny the injunctive relief sought by JCN: