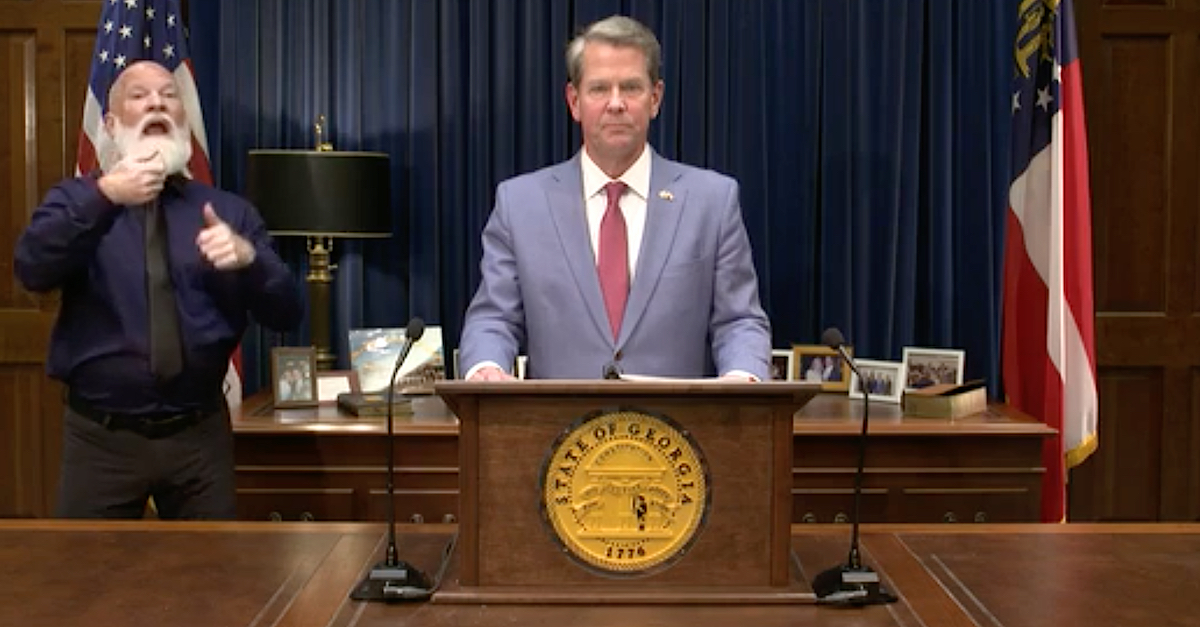 The bill, SB 202, is also known as the “Election Integrity Act of 2021.” It criminalizes the handing out of refreshments at polling locations, clarifies penalties for false swearing, among other things, and prohibits voters from taking selfies with their ballots, among other things. Gov. Kemp dismissed criticism against the bill immediately after signing it into law.

Here’s our assessment of several of the law’s key provisions.

Section 33 of the Act has received significant attention. It enacts new restrictions on activities near polling sites as follows (the new language is in bold):

(1) Within 150 feet of the outer edge of any building within which a polling place is established;

(2) Within any polling place; or

(3) Within 25 feet of any voter standing in line to vote at any polling place.

These restrictions shall not apply to conduct occurring in private offices or areas which cannot be seen or heard by such electors.

(e) This Code section shall not be construed to prohibit a poll officer from distributing materials, as required by law, which are necessary for the purpose of instructing electors or from distributing materials prepared by the Secretary of State which are designed solely for the purpose of encouraging voter participation in the election being conducted or from making available self-service water from an unattended receptacle to an elector waiting in line to vote.

The bill itself doesn’t say so, but Section (f) of the amended underlying statute says violations of these new provisions are misdemeanors. Under Georgia criminal law, an unclassified misdemeanor is punishable by up to a year behind bars, a fine of up to $1,000, or both.

No, we don’t mean cussing.

I, the undersigned, do swear (or affirm) under penalty of false swearing that I am a citizen of the United States and of the State of Georgia; that I possess the qualifications of an elector required by the laws of the State of Georgia; that I am entitled to vote in the precinct containing my residence in the primary or election in which this ballot is to be cast; that I am eligible to vote by absentee ballot; that I have not marked or mailed any other absentee ballot, nor will I mark or mail another absentee ballot for voting in such primary or election; nor shall I vote therein in person; and that I have read and understand the instructions accompanying this ballot; and that I have carefully complied with such instructions in completing this ballot; that I have marked and sealed this ballot in private and have not allowed any unauthorized person to observe the voting of this ballot or how this ballot was voted except those authorized under state and federal law; and that I will not give or transfer this ballot to any person not authorized by law to deliver or return absentee ballots. I understand that the offer or acceptance of money or any other object of value to vote for any particular candidate, list of candidates, issue, or list of issues included in this election constitutes an act of voter fraud and is a felony under Georgia law.

False swearing is a felony punishable by between one and five years in prison, a fine of up to $1,000, or both.

Here’s one section of the Act which prohibits ballot application harvesting (new language in bold):

Again, unclassified misdemeanors are punishable by up to a year behind bars, a fine of up to $1,000, or both.

Elsewhere, the Act makes the harvesting of completed ballots (not simply ballot applications) a new felony in Georgia:

“Any person who knowingly . . . [a]ccepts an absentee ballot from an elector for delivery or return to the board of registrars except as authorized . . . shall be guilty of a felony,” the law now reads.

An underlying statute says this new felony is punishable by between one and ten years in prison, a fine of up to $100,000, or both.

Another unclassified misdemeanor created by the Act prevents voters from taking pictures of their ballots.

(a) It shall be illegal for any person to use photographic or other electronic monitoring or recording devices, cameras, or cellular telephones, except as authorized by law, to:

(2) Photograph or record a voted ballot.

(b) Any person who violates subsection (a) of this Code section shall be guilty of a misdemeanor.

Laws which ban ballot selfies are generally designed to prevent candidates or interest groups form paying people to vote certain ways. A photograph would in essence function as a bill for nefarious services rendered in such a scheme.

The Act seeks to crack down on the practice of observing electors while they are casting ballots ballots. Here’s yet another new felony the Act delineates:

(a) Except while providing authorized assistance in voting . . . and except for children authorized to be in the enclosed space . . . no person shall intentionally observe an elector while casting a ballot in a manner that would allow such person to see for whom or what the elector is voting.

The Act reinforces several other felonies which are already on the books.

Any unauthorized person who “unseals a sealed absentee ballot envelope shall be guilty of a felony.”

“Georgia law provides that any person who knowingly falsifies information so as to vote illegally by absentee ballot or who illegally gives or receives assistance in voting . . . shall be guilty of a felony,” it says elsewhere.

Ballots will continue to be marked to contain the following warning regarding bribery:

I understand that the offer or acceptance of money or any other object of value to vote for any particular candidate, list of candidates, issue, or list of issues included in this election constitutes an act of voter fraud and is a felony under Georgia law.

After signing the bill, Kemp said in a prepared statement that “few” issues are “more important” than making elections “secure, accessible, and fair.”

“Contrary to the hyper-partisan rhetoric you may have heard inside and outside this gold dome, the facts are this new law will expand voting access in the Peach State,” he said from the capitol.  “Every county in Georgia will now have two mandatory Saturdays of early voting and the option of two Sundays of early voting.”

He said “left wing groups funded by out of state billionaires” are already flooding the state with “outrageous, false rhetoric” designed to “scare” Georgia residents about the changes.

“For over ten years, I have led the fight to strengthen protections at the ballot box and ensure that every legal voter has their voice heard in our elections,” Kemp said. “As Secretary of State, I sued the Obama justice department to make sure Georgia had a citizenship check before you register to vote. Despite media outrage and relentless attacks from some with a financial or political agenda, I led the fight to aggressively investigate all allegations of voter fraud and followed the law to keep our voter rolls clean — and I lost count of how many times I defended our voter ID laws in court against those who wanted to endanger the integrity of our elections.”

“After the November election last year, I knew, like so many of you, that significant reforms of our state elections were needed,” he continued. “There is no doubt there were many alarming issues with how the election was handled, and those problems understandably led to a crisis of confidence in the ballot box here in Georgia.”

Kemp recapped calls for audits and changes to state laws.

“I joined many others, including President Trump, in urging the Secretary of State’s Office to quickly and fully investigate any and all fraud or irregularities,” Kemp added.

He said the new laws make it “easy to vote and hard to cheat.” He wrapped up by saying Georgians of “all political persuasions . . . can have greater confidence in their vote.”

The governor then slammed the federal Help America Vote Act. He said the federal bill would encourage ballot harvesting — which he said was illegal in Georgia.

Read the complete text of SB 202 below:

Georgia SB 202, the Election Integrity Act of 2021 by Law&Crime on Scribd