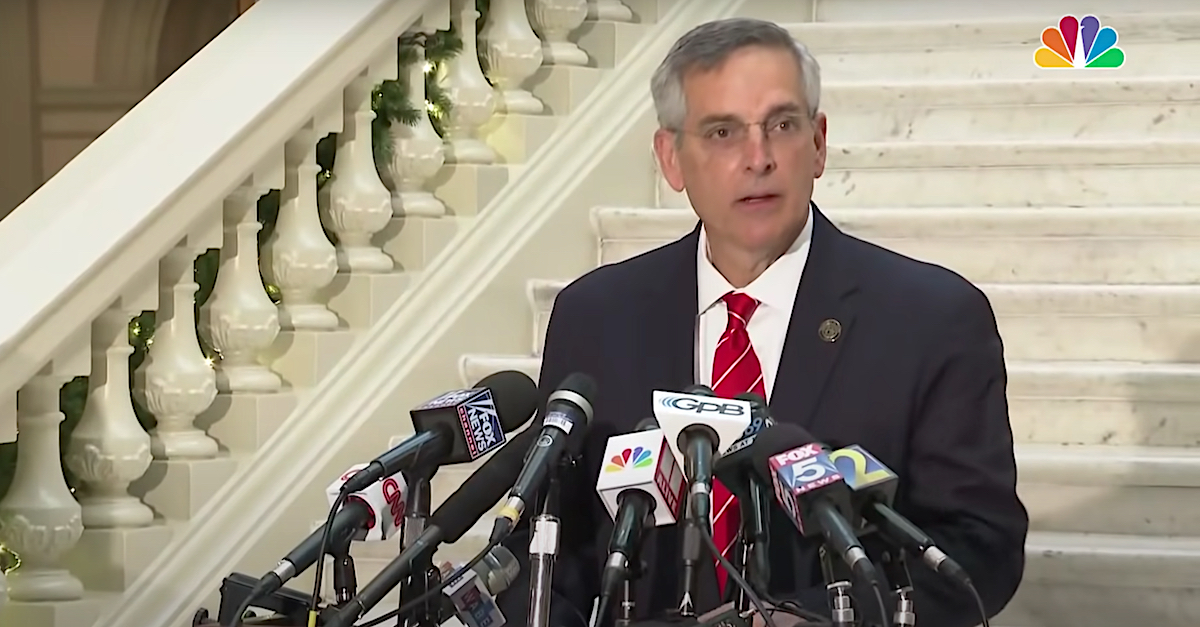 A lawsuit filed Thursday in U.S. District Court for the Northern District of Georgia challenged the Peach State’s SB 202, the “Election Integrity Act of 2021,” on the very same day the Act was signed into law.

The lawsuit refers to the Act by a new moniker: the “Voter Suppression Bill.” It alleges that the Act “was animated by an impermissible goal of restricting voting” rather than by an honest belief that the state’s procedures and criminal penalties needed to be legitimately strengthened.

The named plaintiffs are The New Georgia Project, Black Voters Matter Fund, and Rise, Inc. The defendants are various members of the Georgia State Election Board and Secretary of State Brad Raffensperger (R), all of whom are sued in their official capacities.

The lawsuit recaps the state’s “record-shattering” turnout in 2021, then takes aim at conspiracy theories that the election was rife with fraud, misconduct, and other unscrupulous behavior. It notes that none of the lawsuits filed by “[s]upporters of former President Donald J. Trump” found support for such “fanciful claims” of malfeasance.

The Act signed into effect Thursday evening by Gov. Brian Kemp (R) is “clearly intended to and will have the effect of making it harder for lawful Georgia voters to participate in the State’s elections,” the lawsuit alleges.

It then promulgates a list of complaints against the Act, saying it:

Unduly restricts the use of absentee drop boxes;

Burdens voters with the risk of disenfranchisement due to meritless challenges that require an immediate defense of their qualifications;

Invalidates ballots cast by lawful voters before 5:00 p.m. in a precinct other than the one to which they were assigned, regardless of the reason or their ability to travel to another location (or wait until after
5:00 p.m.) to cast their ballot;

Bans any non-poll worker from giving food or drink, including water, to voters waiting in line; [and]

Compresses the time period for voting in the runoff election.

“These provisions lack any justification for their burdensome and discriminatory effects on voting,” the lawsuit alleges. “Instead, they represent a hodgepodge of unnecessary restrictions that target almost every aspect of the voting process but serve no legitimate purpose or compelling state interest other than to make absentee,
early, and election-day voting more difficult—especially for minority voters.”

The lawsuit also pits the Secretary of State’s prior statements concerning the 2020 election against those of the Act’s supporters. Raffensperger said that Georgia “had safe, secure, honest elections” which provided a “gold standard” for other states to follow; however, the Act’s proponents believed otherwise.

Alice O’Lenick, Chairwoman of the Gwinnett County Board of Registrations and Elections, is cited in the court papers as having told other Republicans that 2020 was a “terrible elections cycle” for her party.

“I will not let them end this session without changing some of these laws,” she said. “They don’t have to change all of them, but they’ve got to change the major parts so that we at least have a shot at winning.”

In a moment of candor, even Speaker Ralston recognized that the premise of the special committee—that the integrity of the 2020 election had somehow been compromised—was fiction. He said: “Let’s look at the facts here. The facts are we’ve had [two] recounts. We’ve had an audit and we’ve had more than six—I’ve lost count. I know there’s at least six lawsuits that have been filed, all of which have been dismissed. Which kind of begs the question if there were, in fact, significant wrongdoing would it not have been disclosed?” But the absence of significant fraud was irrelevant to the committee’s creation and its subsequent efforts to make voting unjustifiably more difficult for lawful Georgia voters, particularly Black voters.

The lawsuit goes on to recap Georgia’s “history of discrimination against racial minorities” and racially insensitive comments by current Georgia political leaders.

It alleges two counts: (1) that the Act places an undue burden on the right to vote under the First and Fourteenth Amendments and several federal statutes; and (2) that the Georgia Act violates the federal Voting Rights Act.

The lawsuit seeks declarations by the court that the Act violates the federal laws cited above and an order enjoining the defendants from enforcing the Act. It also seeks costs, expenses, attorneys’ fees, and other “just and proper” relief.

[image via screengrab from NBC News/YouTube]