Judge Refuses to Hit Pause on Trump v. Clinton RICO Hearing Even Though Both Sides Agreed to Delay 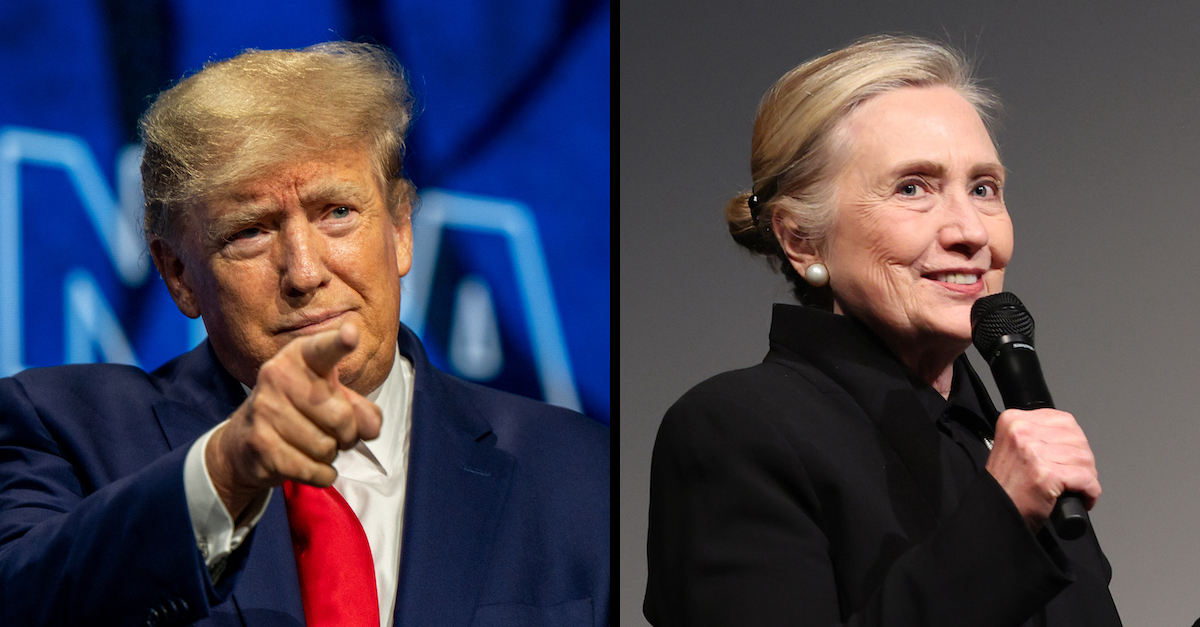 A federal magistrate judge in Florida on Tuesday refused to delay an upcoming June 2, 2022 hearing in a sprawling RICO lawsuit filed by Donald Trump against Hillary Clinton and a bevy of Democrats.

Magistrate Judge Bruce E. Reinhart wrote Tuesday in a brief so-called “paperless order” that he was denying a “Joint Motion to Adjourn” a scheduled status conference.

The parties expressed a mutual desire to put off the hearing until after the court settled several other outstanding issues — including a very large stack of motions to dismiss by the myriad defendants and a request by Trump’s attorneys to “cure defects” or to “otherwise improve and enhance” their claims.

In view of the Court’s May 4, 2022, paperless order setting a June 2, 2022 status conference “to discuss the scheduling of the Rule 16 conference,” counsel for the identified defendants and counsel for plaintiff have conferred and agree that such a conference should not be scheduled until after the disposition of the pending motions to dismiss the complaint and after the disposition of any later filed motions to dismiss (if any) addressing an amended complaint (if any). Undersigned counsel have conferred with counsel for plaintiff and all counsel for defendants listed above, and obtained consent for this motion.

“All defendants expressly reserve any and all defenses, including any objections to the adequacy of service and defenses as to jurisdiction,” the horde of litigants said in unison.

Rule 16 of the Federal Rules of Civil Procedure is a rather catch-all rule for pre-trial hearings. It reads, in part:

(a) Purposes of a Pretrial Conference. In any action, the court may order the attorneys and any unrepresented parties to appear for one or more pretrial conferences for such purposes as:

(1) expediting disposition of the action;

(2) establishing early and continuing control so that the case will not be protracted because of lack of management;

(4) improving the quality of the trial through more thorough preparation; and

It is not uncommon for parties to mutually agree to postpone hearings, and such delays tend to be granted when they are not opposed. Here, however, the magistrate nixed the hand-shake between the plaintiff and the defendants, and the hearing remains scheduled for Thursday.

Attorneys for Trump said on April 22 that they wanted either (1) time to file an amended complaint, or (2) to have additional time to respond to Clinton’s motion to dismiss the case.

U.S. District Judge Donald M. Middlebrooks said on April 25 that he wasn’t sure if he could grant that request because it was unclear whether all parties consented; Clinton’s attorneys later filed a response saying they had no issue with the delay. Judge Middlebrooks acquiesced on April 28 and said any amended complaint must be filed by June 20.

The judge nodded to the reality that there are at least two dozen defendants in acquiescing to the delay as to a possible amended complaint:

Because several Defendants have requested extensions of time to respond to the Complaint, which Plaintiff has not opposed, Plaintiff now requests “an extension of 39 days to either file an Amended Complaint, as a matter of course, pursuant to Rule 15(a) or to file a Response to Hillary Clinton’s Motion to Dismiss.” While I am not persuaded that I can change the time frame to amend “as a matter of course” under Rule 15(a)(1) — a deadline that is prescribed by the Federal Rules — Rule 15(a) provides another avenue for amendment: Rule 15(a)(2). Under Rule 15(a)(2), a party may amend its pleading with the court’s leave, and “[t]he court should freely give leave when justice so requires.” Here, because of the extensions sought by Defendants and in the interest of allowing Plaintiff to cure any deficiencies in an efficient manner, I will grant Plaintiff until June 20, 2022 to amend his Complaint or respond to Defendant Clinton’s Motion to Dismiss

The Trump lawsuit alleged civil violations of the Racketeer Influenced and Corrupt Organizations Act, injurious falsehood, theft of trade secrets, violations of the Stored Communications Act, and other actions — 16 in total.  Clinton and a significant percentage (if not all) of the named defendants have moved to dismiss the case, mostly because the statute of limitations for the claims pressed by Trump have already passed.

Judge Middlebrooks has, as noted, has generally been amenable to letting the process play out as the parties wish, but the magistrate appears inclined to keep things on track.