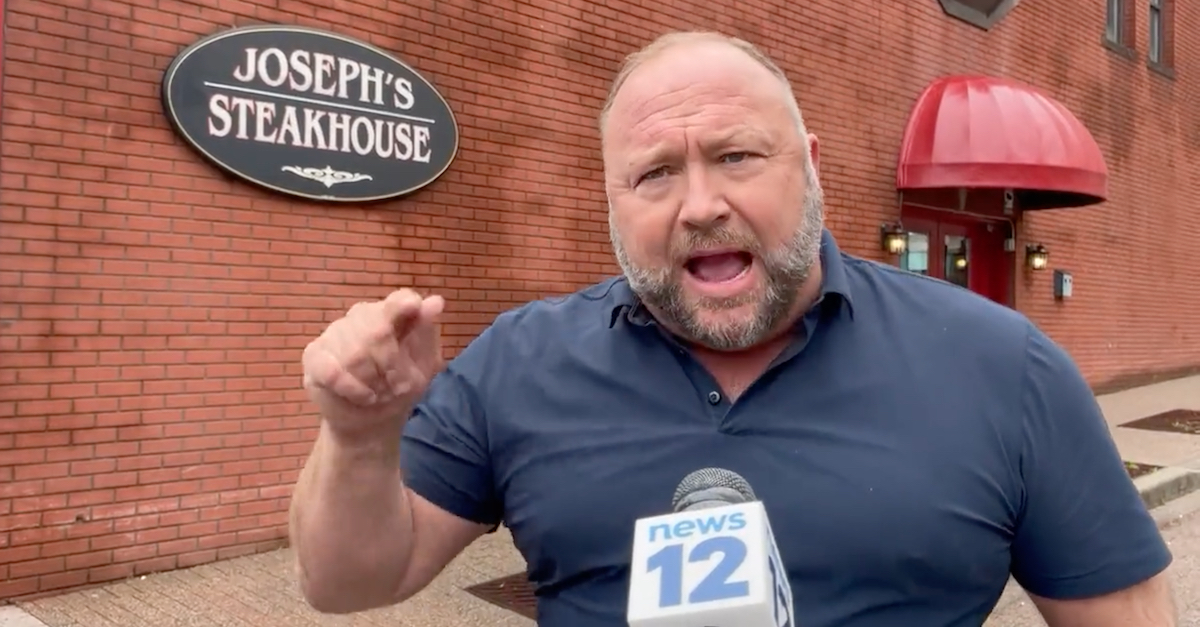 Alex Jones spoke to a local reporter from News12 Connecticut while on an apparent lunch break during his deposition.

InfoWars host Alex Jones sounded off outside a Bridgeport, Connecticut law firm around the lunch hour on Wednesday during what court documents suggest was the second day of a planned two-day deposition. The sit-and-talk session was connected to a civil lawsuit filed by a collection of plaintiffs related to the victims of the Sandy Hook school massacre of Dec. 14, 2012.

Jones said he could not reveal what he said as a deponent because the matter was “marked as confidential,” but that didn’t stop him from alleging a broad conspiracy against him by the “Democratic Party,” the “dying corporate media,” and the “mainstream media” — all of which he suggested added up to his inclusion in the “cancel culture.”

“There is a war against the First Amendment,” Jones suggested in comments to News12 Connecticut reporter Marissa Alter. He then said that the media “lied” about “WMDs in Iraq” and about “Jussie Smollett” — as if to cast blame away from his own statements about the school shooting and to suggest that others have committed similar or greater sins than he.

JUST IN: Here’s what Alex Jones had to say regarding his deposition in Bridgeport today where he’s being questioned by lawyers for the families of Sandy Hook victims. A judge had ordered he be fined until he appeared. @News12CT pic.twitter.com/hSSLaZ5AEH

“I believe Sandy Hook happened; I’m sorry for the families,” Jones then told Alter. “But they’re being used, in my view, as pawns by powerful Democrat law firms that want to try to shut down InfoWars and Alex Jones.”

The latter appeared to be a quip against one of the plaintiffs’ attorneys, who is also an elected politician and the son of U.S. Sen. Richard Blumenthal (D).

“People don’t even remember Adam Lanza’s name, the crazed teenager that went and killed those poor children and others,” Jones claimed.

“They think about Alex Jones when they hear about the dead children,” he continued. “How is that? That’s media brainwashing.”

When asked point blank by Alter whether he was “walking back” his previous assertions about the school shooting, Jones said he had “walked back what [he] said about Sandy Hook years and years ago” but again blamed the “corporate media” for not giving his apologies ample air time.

He even claimed his assertions that Sandy Hook did, indeed, happen according to the official story had been “edited . . . out” of his infamous 2017 interview with Megyn Kelly on NBC.

Jones, railing against “cancel culture,” also accused various forces of “setting him up” as a “villain” while asserting he was “not a villain.”

Jones failed to sit for a previously scheduled March 24 and 25 deposition in Texas due to health concerns. His doctors feared heart trouble, but it was later revealed he had a sinus infection. Due to the missed dates, a Connecticut judge held Jones in contempt and ordered him to appear in the Nutmeg State, where the litigation is based, or to start paying increasing fines starting at $25,000 per day for each date he failed to appear.

Jones coughed up the first $25,000 payment on Friday and paid $50,000 on Monday, according to court records. He stopped paying Tuesday and filed a notice that he was in compliance of the court order to appear. Per the judge’s original order, Jones becomes eligible for a refund once the deposition is complete.

Jones’s attorneys filed a series of court documents late Wednesday — one bears a Thursday court date because it was filed after the normal close of business on Wednesday — which state that an additional day of questions has been scheduled remotely. He’s also asking to be purged (or cleared) of the judge’s contempt finding and for his fines to be summarily refunded without delay:

On April 5, 2022 and April 6, 2022, Defendant Alex Jones sat for two full days of his deposition at the offices of the Plaintiffs’ counsel – even going above and beyond the Court’s March 30, 2022 order by sitting beyond normal hours for the deposition to afford the Plaintiffs’ counsel a full and fair opportunity to question him. Thus, the Jones Defendants move the Court for an immediate order declaring Mr. Jones purged of civil contempt and ordering the immediate return of the $75,000 in fines that Mr. Jones paid to the Court’s clerk on April 1, 2022 and April 4, 2022

Another document elucidates further on the deposition and the upshot thereof:

The parties’ consent to hold open Mr. Jones’ deposition for Defendant Genesis Communications to inquire of Mr. Jones does not affect Mr. Jones’ compliance with the Court’s March 30, 2022 order. He sat for two full days of depositions at the Plaintiffs’ counsel’s office as the Court ordered. Therefore, in this supplemental filing, the Jones Defendants ask the Court to enter an immediate order finding that Mr. Jones has purged his contempt and articulating that it will not require him to pay a daily fine so that no confusion exists over whether he must continue to pay it.

Cameron Atkinson, who represents Jones, replied late Wednesday night to a Law&Crime request for comment that neither he nor co-counsel Norm Pattis would supply “material” for a Law&Crime “hit piece.”

But one person did comment about what Jones said. His ex-wife issued this response to the video tweeted above:

My name is Kelly Jones. I am Alex Jones’ ex-wife. Alex Jones sued me to silence my opposition to infowars. I lost my kids for blowing the whistle on infowars. I am under unconstitutional prior restraint injunctions. Alex Jones’ 1st Amendment stance is hypocritical & fraudulent.

Some of the documents fled late Wednesday by the defense are below:

[Editor’s note:  this piece has been updated to include comment from Atkinson.]