Judge Refuses to Pause Fines for Alex Jones After Sandy Hook Plaintiffs Swing Back: You ‘Chose to Go On the Air Rather Than Go Under Oath’ 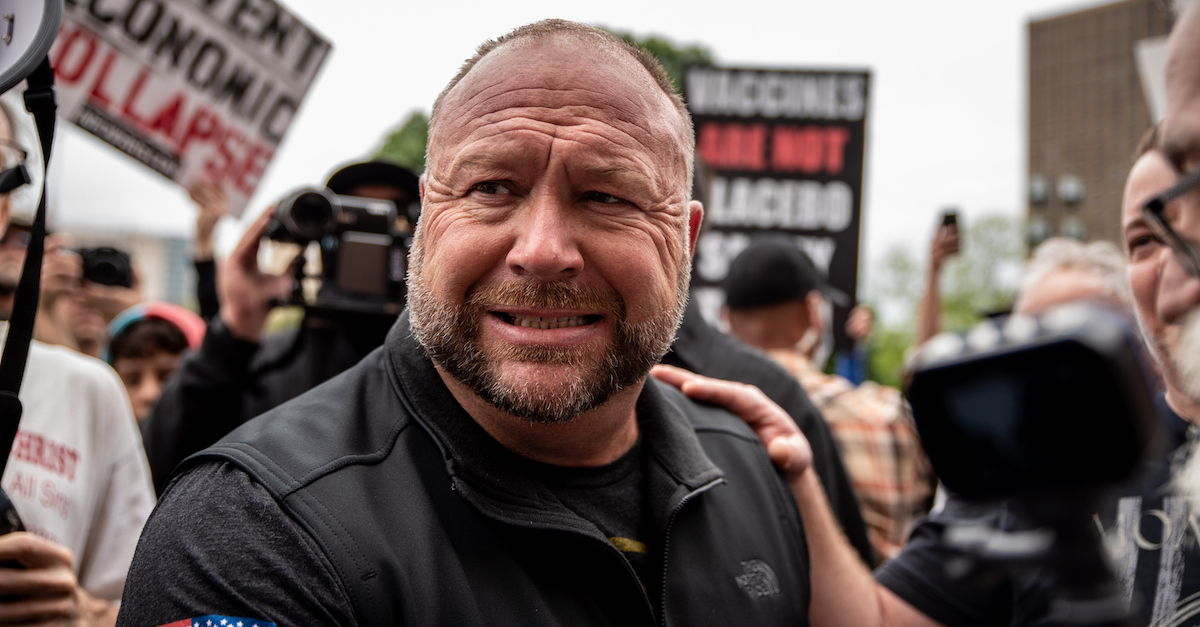 Infowars host Alex Jones appears in a file photo taken during a protest outside the Texas State Capital building on April 18, 2020 in Austin. (Photo by Sergio Flores/Getty Images.)

A Connecticut trial court judge on Friday declined to pause a schedule of escalating fines against InfoWars host Alex Jones in connection with a defamation lawsuit filed by the family members of the victims of the Dec. 14, 2012 Sandy Hook school massacre.

As Law&Crime has previously noted, the families sued Jones and some of his associated businesses on claims of defamation, invasion of privacy by false light, intentional infliction of emotional distress, negligent infliction of emotional distress, and for alleged violations of the Connecticut Unfair Trade Practices Act. According to an online court docket, a trial is scheduled to begin on May 3, 2022, but Jones has not yet been deposed in the matter. He was scheduled to sit in Texas on March 23 and March 24 but ultimately did not. Though Jones cited a medical issue which allegedly required him to remain at home under a doctor’s supervision for his failure to be deposed, the plaintiff’s attorneys immediately noted that Jones was on the air at his studio at the requisite time and date — a fact which inflamed both them and the judge overseeing the matter.

Judge Barbara Bellis found Jones in contempt of court on Wed., March 30, and ordered exponential fines starting at $25,000 per day for every weekday the defendant failed to be deposed.  The sanctions were scheduled to kick in on Friday, April 1 — the date of this report — and to end on April 15.  The fines increase by $25,000 increments for each weekday Jones fails to sit and talk fully and completely as laid out in the judge’s order.

Because a new deposition date of April 11 has — according to the court record — been promised by Jones, his attorneys moved to stay the fines. The defense cited the fear of having to pay $525,000 in sum total under an order which would, in their words, “force Mr. Jones to produce, on a daily basis, liquid financial assets in excess of $100,000 per day if they so choose – a difficult task for anyone.”  That amount — more than half a million dollars — would include six days of sanctions under the judge’s escalating order.

If Jones does not sit and talk for two full days before April 15, the last date of possible fines, the total Jones would have to pay to the court would be $1.475 million for 11 total days of failure, according to the judge’s order.

The Thursday motion by the defense — and a concomitant filing with the Connecticut Supreme Court, which has not yet been fully made public in an online database — appear to have resulted in nothing but a rubbishing of the relief sought by Jones and his counsel.

Judge Bellis scuttled the attempts by Jones’s attorneys to pause the payments with this Friday order:

Having applied the “balancing of the equities” test, in which four factors warrant consideration, i.e., (1) the likelihood of success on appeal; (2) whether the stay is necessary to avoid irreparable harm; (3) the effect of the stay on other parties; and (4) the public interest, the motion for stay is denied. See Griffin Hosp. v. Commission on Hospitals and Health Care, 196 Conn. 451, 456-457 (1985). The motion represents that Mr. Jones has notified plaintiffs’ counsel that he will attend a deposition on April 11, 2022. The movants are reminded, again, that should Mr. Jones choose to purge the contempt, as this motion suggests may be the case, he can move the court to return the funds.

The judge’s order came not long after the plaintiffs told her not to indulge in Jones’s request for relief. That sharply-worded missive was a response to the original Thursday request by Jones to stay the fines.

“Last week, Alex Jones chose to go on the air rather than go under oath,” that argument — which the judge found persuasive — began in earnest.  “He asked the Court to excuse him, presenting ‘evidence’ and ‘argument’ to the Court that he could ‘not go to deposition because he was remaining home under [medical] supervision,’ which initially ‘deceived’ the Court.”

“In fact, Mr. Jones was not at home under medical supervision; he was at his studio broadcasting,” the plaintiffs’ filing continued. “Even after the Court ordered Mr. Jones to attend his deposition, he refused. The Court rightly held him in contempt and issued orders to cause Mr. Jones to sit for deposition.”

It went on (legal citations omitted):

Contempt sanctions must remain in effect until Mr. Jones is deposed. Counsel for Mr. Jones now informs the Court that Mr. Jones is willing to start his deposition on April 11. Perhaps Mr. Jones will appear for his deposition on April 11. But Mr. Jones also agreed to be deposed on March 23 and March 24. As his actions have shown, a representation from Mr. Jones does not amount to real-life attendance at a deposition. The escalating fines were imposed to compel his appearance and should not be set aside merely because Mr. Jones has yet again said he will appear. Mr. Jones cannot avoid contempt penalties with more court filings: “[b]y its very nature the court’s contempt power, ‘to be effectual, must be immediate and peremptory, and not subject to suspension at the mere will of the offender.’ . . . .”  No stay is appropriate or warranted, and the Motion for Stay should be denied.

The document also states that the April 11 date is not an “agreement” between the parties, to wit:

[T]o the extent the Jones defendants’ Motion suggests the existence of an agreement concerning the date or manner of Mr. Jones’s deposition, that suggestion is incorrect. The plaintiffs have not entered any agreement, because the terms of the Court’s order are clear and the plaintiffs are abiding by those terms. As the Court ordered, the plaintiffs stand prepared to depose Mr. Jones on twenty-four hours’ notice. The plaintiffs understand that Mr. Jones is at present giving notice via his Motion that he will appear for the first day of his deposition on April 11. Should the Court deny his motion, Mr. Jones can choose to avoid additional fines simply by appearing sooner, which he may well do. The choice is his. In either event, the plaintiffs will simply follow the procedures the Court has set for the deposition of Mr. Jones.

In general, the judge agreed with those assertions by denying Jones the relief he sought.

Read the judge’s order and the plaintiffs’ filing below: