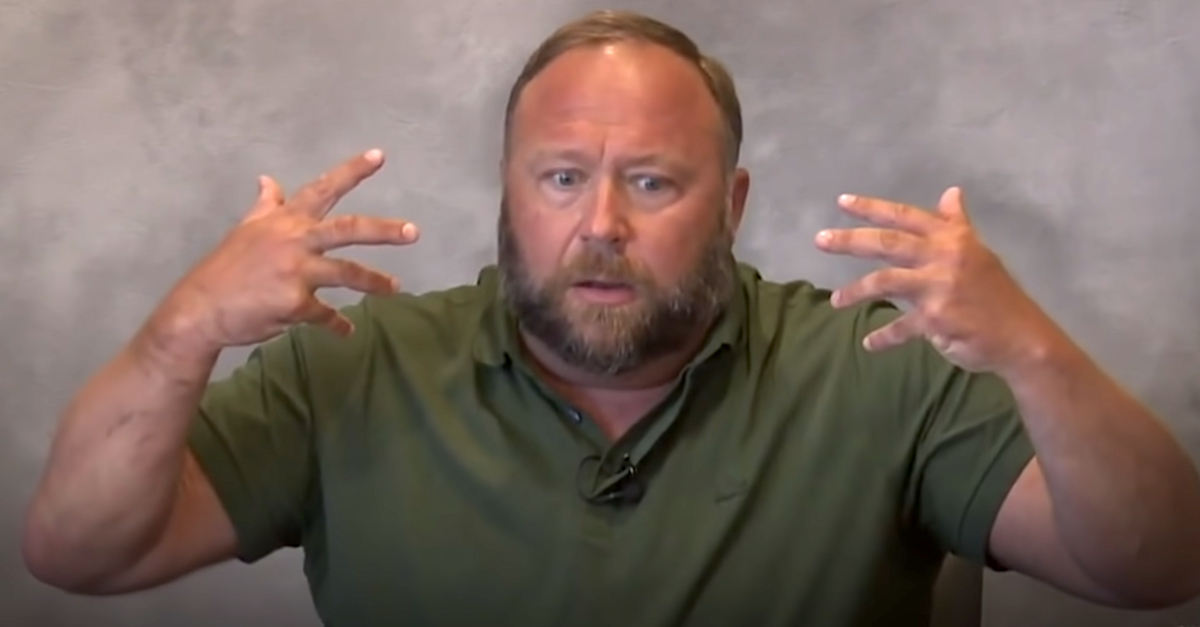 A Connecticut judge on Wednesday afternoon issued a contempt finding against conspiracy theorist and Infowars host Alex Jones. Fines of $25,000 per day will kick in starting Friday unless and until Jones sits for a deposition, but the fines will be refunded if Jones actually goes through with the deposition he skipped out on due to alleged health concerns last week.

The litigation surrounds alleged defamatory comments Jones made against the families of the victims of the Sandy Hook, Conn. school massacre.

“The argument is on the plaintiffs’ motion for sanctions,” Judge Barbara Bellis said at the beginning of the 47-minute hearing. “This isn’t a press conference,” she continued while warning attorneys not to talk about settlement offers which were summarily rubbished by the plaintiffs Tuesday evening.

Christopher Mattei, an attorney for the plaintiffs, said he didn’t wish to “belabor” the court with all the facts while he and co-counsel were in Texas attempting to take Jones’s deposition last week.

“We believe the record establishes those orders were clear, direct,” Mattei said.

The plaintiffs’ attorney noted that Jones appeared on his own broadcast when he was supposed to be appearing for a deposition.

Mattei asked the court to “set conditions” that will “coerce” Jones to sit for a deposition.

Jones would rather face the wrath of the court than be deposed, Mattei suggested. He asked the judge to issue an order that would “change Mr. Jones’s calculus.”

The plaintiffs also asked for costs and fees to be refunded for the ongoing fight.

Mattei said he hoped any decision by the judge would force Jones to “reflect [upon] the seriousness of the violation he committed last week” by failing to appear.

Mattei also said the plaintiffs were asking for an instruction which allowed jurors to draw adverse inferences from Jones’s refusal to sit for the deposition.

Cameron Atkinson, an attorney for Jones, said in a plodding, monotone manner that he had a “shaky internet connection” for the remote hearing but would attempt to soldier on.

“Mr. Jones recognizes that the plaintiffs have a right to take his deposition,” Atkinson said. “He sat for three, by my account, in cases related to the Sandy Hook litigation in Texas.”

“What has occurred here is he has ultimately listened to his doctor’s advice,” Atkinson continued. “First, initially, and today, there was an uncontroverted record before this court, and there still is, that Mr. Jones’s doctors thought his conditions were serious enough to require emergency medical care, and they rendered precautionary advice that included a recommendation that he go to the emergency room immediately.”

The judge butted in and asked whether the court had the power to evaluate whether the medical advice was “right.”

Atkinson said it would be “crazy” for the judge not to do her job as a judge. “What has presented to you shows beyond a shadow of a doubt,” he continued, that Jones’s doctors were “making these recommendations.”

“It took some serious persuading for him to recognize the seriousness of his condition . . . to avoid stress,” Atkinson continued.

Atkinson asserted that Jones never was seeking to escape the deposition — just to postpone it until his “doctors cleared him to sit for it.”

Atkinson then extolled the stress that would result from two days of depositions.

“There was nothing in the record,” the judge said, to suggest that Jones’s doctor even knew what a deposition was.

“This court should not hold Mr. Jones in contempt,” Atkinson continued. “If he experienced escalating symptoms that required him to be hospitalized . . . he need not attend his deposition,” the attorney said in an attempt to recap a previous ruling by the judge.

The judge again cut in to correct Atkinson’s assertions.

“I was never given any evidence that suggested he had escalating symptoms,” the judge said.

He said Jones had a “difficult choice” — one which was “extraordinarily difficult”: the “consequences to his health could prove disastrous” if he sat for the deposition or could risk sanctions for caring for himself, the defense attorney asserted while tripping over his words.

“We freely concede that he did not listen to the initial recommendations of his doctors,” Atkinson said.

The judge again interjected a few comments to clear up the “record.” But she said she was “delighted” to see that the defendant submitted some briefs a day early.

“That may have been due to me misreading the deadline,” Atkinson said.

The judge, as if to coddle Atkinson, said he did a “terrific job” with the documents.

“We believe the court should not hold Mr. Jones in contempt,” Atkinson repeated. But, if the court did, he asked the court not to issue an arrest warrant. “It is clear . . . that Mr. Jones has experienced some health problems . . . we would submit that issuing an arrest warrant . . . would only serve to exacerbate those health concerns. . . that alone should counsel against the issuance of that warrant.”

Atkinson again asserted that Jones knows he must attend a deposition — some day. He suggested that “escalating fines” would be sufficient to “procure” Jones’s attendance at a deposition.

Atkinson then repeated suggestions that since society “deferred” to doctors during the COVID-19 pandemic.

“It was not an action that was taken in bad faith,” Atkinson said regarding Jones’s failure to appear.

Mattei responded that Jones should be forced to appear in Connecticut given his failure to show up to be deposed in his home state of Texas. He also noted that the record is silent as to whatever Jones’s current health status might be. Mattei suggested that Jones’s ailment may have simply been a “sinus blockage.”

The judge gave Atkinson yet another chance to respond re: the location of the deposition — though she said she normally would not give him a chance to do so.  She added that it was odd that the defense counsel didn’t offer a future date for a deposition in order to settle the matter.

Atkinson said Jones was unavailable at the beginning and end of April — in part due to other litigation in Texas.  He said Jones could be made available around April 11. He added that the court would be “within its province to order” Jones to show up in the Nutmeg State for the sit-and-talk session.

“I am a bit reluctant to put this on the record, but we understand the plaintiff’s counsel enforces a fairly strict Covid protocol at their offices . . . something Mr. Jones is not willing to do,” Atkinson added. “We would ask that be taken into consideration.”

The judge then issued a ruling.

She recapped Connecticut rules surrounding depositions, said she denied a Jones request for a protective order, and noted that the depositions had been scheduled for the 23rd and 24th.

The judge then slammed Jones for working at his studios instead of resting at home or caring for his health.

“The note fell far short,” the judge said with reference to a doctor’s note provided to the court regarding Jones’s health situation.

Citing a previous decision, the judge said Jones could only use hospitalization as an excuse to avoid his deposition. Since he was broadcasting during his purported health scare and not in the hospital, he was in contempt, the judge reasoned.

The judge bemoaned that the case had been churning for four years — and now, just weeks before jury selection, Jones still has not been deposed.

Jury selection is scheduled for August; evidence is slated to be presented by September.

“The court finds by clear and convincing evidence that the defendant, Alex Jones, willfully and in bad faith violated without justification several clear court orders requiring his attendance at his depositions on March 23 and March 24,” the judge said. She added that Jones “intentionally failed to comply with orders of the court and that there is no adequate factual basis to explain his failures.”

The judge ordered Jones to pay $25,000 in fines “each week day beginning on Friday, April 1, increasing by $25,000 per week day” until he sits for the deposition. In other words, on the second day, the fine will increase to $50,000 and so on, the judge said by giving examples.

“The contempt will be purged when Jones completes two full days of deposition,” the judge said.

She called the fines “coercive” but “reasonable and necessary in this matter.”

The fines would be reimbursed if and when Jones sits for the deposition, the judge said. She said Jones tried to “manipulate” the court process by failing to sit.

If Jones does not sit for depositions by April 15, the judge said the jury would be allowed to assume negative inferences about Jones from his failure to sit.

The judge also said the plaintiffs were entitled to fees and costs associated with the missed depositions.

According to the court docket, hearings are scheduled for April 4, April 18, and April 20.

The judge thanked the attorneys for their professionalism and wrapped up the proceeding.

[image via a YouTube screengrab of a previous deposition]