After Gun Charge, Adam Honeycutt Gets Jail Time for Jan. 6 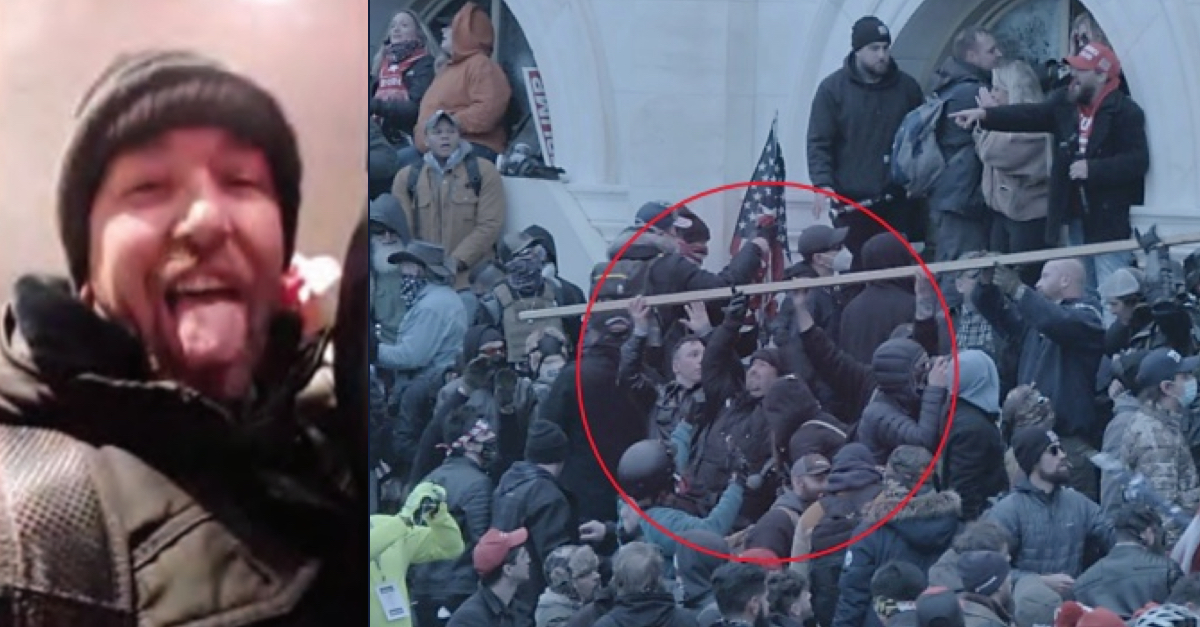 Adam Avery Honeycutt is seen in a screengrab of a video he took from inside a conference room in the U.S. Capitol on Jan. 6 (left) and as part of the mob outside the Capitol appearing to help move a plank forward on top of the crowd in an effort to help breach the building. (Images via FBI court filing.)

A Florida man who is weeks away from finishing a prison sentence on federal gun charges will have to spend 90 more days behind bars for storming the U.S. Capitol on Jan. 6.

Adam Avery Honeycutt, 40, was sentenced Wednesday to three months in jail after pleading guilty in March to a misdemeanor charge for breaching the U.S. Capitol on Jan. 6. He admitted that he had entered the building, along with scores of other Donald Trump supporters seeking to block Congress from certifying the results of the 2020 presidential election. He posted videos to his Facebook account showing him inside the Capitol building, at one point turning the camera on himself and saying “Well, made it in,” and sticking his tongue out.

Honeycutt was also pictured in front of the Capitol holding a large wooden beam with both hands, apparently helping move the beam toward the Lower West Tunnel as police tried to hold off an increasingly violent crowd.

Prosecutors said that Honeycutt took to Facebook again days later, this time trying to downplay his role in the riot by saying that he was “at the food truck when the shit hit the fan,” and that poor cell phone coverage stopped him from telling people he “wasn’t with the rioters.”

While Honeycutt was charged with only misdemeanors and not any felonies, his role in the riot eventually led to him going to prison on significantly more serious charges. When federal investigators executed a search warrant at Honeycutt’s home in February 2021, they seized seven firearms, more than 10,000 rounds of ammunition, and marijuana and drug paraphernalia. Two of the guns were loaded. According to prosecutors, Honeycutt lived at the home with his three children ranging in age from 2 to 9, the children’s mother, and his father.

Honeycutt, who previously ran a bail bond company, was charged and ultimately pleaded guilty in June to firearms charges. He was sentenced to 18 months in prison, including time served since his arrest in February, and one year of probation.

At Honeycutt’s sentencing hearing on Wednesday, U.S. District Judge Carl Nichols said that while Honeycutt wasn’t accused of engaging in any violence or property destruction at the Capitol that day, his actions were considerably more serious than other Jan. 6 defendants who had pleaded guilty to the same misdemeanor charge.

“Although Mr. Honeycutt is not among the worst Jan. 6 offenders I’ve encountered, his offense is not to be taken lightly,” Nichols said. “I conclude he poses somewhat of a risk of recidivism. He celebrated on social media in real time the violence and destruction he saw on Jan. 6.”

Nichols did not tack on any probation to the three-month jail sentence, citing Honeycutt’s pending supervised release on the firearms charges. Nichols also noted that he has determined that he does not have legal authority to issue split sentences on petty offense charges such as the parading and picketing misdemeanor, alluding to a current split among judges in the D.C. District.

At the end of the hearing, Nichols said he would allow Honeycutt to self-surrender to serve the 90 days.

“My view is Mr. Honeycutt need not self-surrender until at least two days after he has finished serving his period of incarceration here,” Nichols said, noting that other Jan. 6 defendants who were sentenced to jail time for the same charged were similarly allowed to voluntarily turn themselves in.

Honeycutt’s current prison sentence is set to end on May 23, according to court filings.