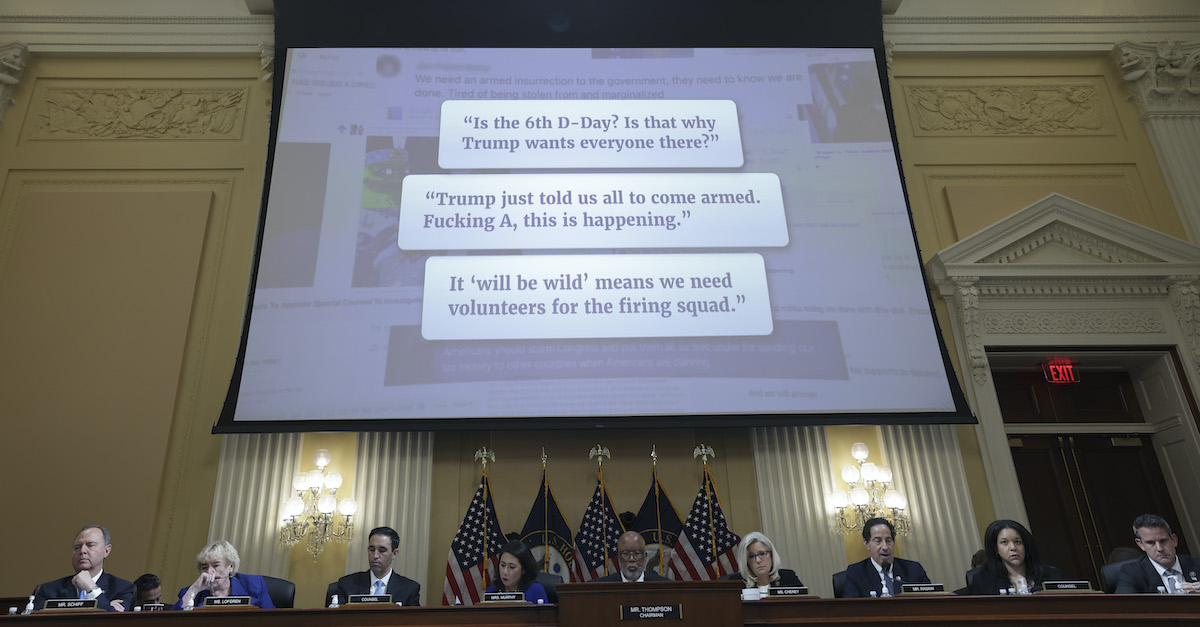 WASHINGTON, DC – JULY 12: Messages on Twitter appear on a video screen above members of the Select Committee to Investigate the January 6th Attack on the U.S. Capitol during the seventh hearing on the January 6th investigation in the Cannon House Office Building on July 12, 2022 in Washington, DC.

In the early morning hours of Dec. 19, former President Donald Trump fired off a tweet of a only dozen words, but congressional investigators say the extremists who overran the U.S. Capitol weeks later viewed it immediately as a “call to arms.”

As anticipated, the House Select Committee investigating the Jan. 6 attack on the Capitol focused its hearing on Trump’s ties to the Oath Keepers, Proud Boys and QAnon conspiracy theorists. In that tweet on Dec. 19, Trump exhorted his followers to gather in Washington, D.C. on the day that a joint session of Congress had planned to certify Joe Biden’s victory in the election.

Rep. Jamie Raskin (D-Md.), a committee member who served as the lead prosecutor at Trump’s second impeachment, said that the “will be wild” tweet followed what he called the “craziest meeting of the Trump presidency.” Trump’s lawyer Rudy Giuliani, his would-be special counsel Sidney Powell, and staunch loyalist Gen. Michael Flynn presented him with a plan to seize the voting machines.

In depositions, participants in that meeting described as “unhinged” and involved shouting and expletive-laden exchanges.

During that meeting, Trump also indicated that he wanted to appoint Powell, a conspiracy theorist behind a string of failed “Kraken” lawsuits, as special counsel and empower her to criminally prosecute people in relation to the 2020 presidential election.

White House counsel Pat Cipollone, who reportedly testified behind closed doors for more than eight hours on Friday, said in a videotaped deposition that he “vehemently opposed” the idea. He recounted seeing former Overstock CEO Patrick Byrne there and didn’t recognize him. (Byrne resigned from the company in 2019, following revelations of his affair with Russian agent Maria Butina.) The idea was rejected after midnight, and Giuliani recounted branding opponents of the plan as “pussies.”

The post “electrified and galvanized his supporters, especially dangerous extremists like the Oath Keepers, the Proud Boys, and other racist and white nationalist groups spoiling for a fight against the government,” Raskin noted.

The Justice Department’s prosecution of the Oath Keepers showed how the group’s Florida chapter leader viewed the post.

“He wants us to make it WILD that’s what he’s saying,” Kelly Meggs allegedly wrote in a Facebook post some three days after that tweet, according to an indictment released a little more than a month after the attack.

Rep. Stephanie Murphy (D-Fla.) said flatly: “This tweet served as a call to action, and in some cases as a call to arms, for many of President Trump’s most loyal supporters.”

Prosecutors have not charged Stone with any crimes related to the attack on the Capitol, but multiple Oath Keepers who guarded him — Robert Minuta and Joshua James — are being prosecuted in the seditious conspiracy indictment. James became the first Oath Keepers member in that case to cooperate with the Justice Department’s investigation. Brian Ulrich, from the extremist group’s Georgia chapter, followed. The federal judges presiding over the Oath Keepers and Proud Boys seditious conspiracy cases “reluctantly” agreed to delay both trials until later in the year, after prosecutors and defense attorneys agreed that the committee’s investigation required an adjournment.

At least three Oath Keepers members charged with seditious conspiracy have pleaded guilty to date, one of whom told prosecutors that he heard the group’s leader Stewart Rhodes try to reach Trump through an intermediary on the day of the attack. William Todd Wilson, now cooperating fully with the government, said in a statement of offense that he overheard the conversation with the intermediary during a meeting with fellow Oath Keepers members inside a private suite of D.C.’s Phoenix Hotel around 5 p.m. Eastern Time.

“Wilson heard Rhodes repeatedly implore the individual to tell President Trump to call upon groups like the Oath Keepers to forcibly oppose the transfer of power,” prosecutor summarized in a statement signed by Wilson. “This individual denied Rhodes’s request to speak directly with President Trump. After the call ended, Rhodes stated to the group, ‘I just want to fight.'”

Shortly before the hearing, a now-incarcerated Rhodes offered through his attorney to testify before the committee — under certain conditions. Rhodes demanded to testify inside the U.S. Capitol, rather than from jail. He also wanted to be accompanied by his lawyer and speak to Congress live. The committee’s aides declined to comment on whether they have discussed the offer with Rhodes’s counsel.

The committee’s live witnesses typically speak to the lawmakers first behind closed doors.