Sidney Powell: Trump Asked Me to Be Election Special Counsel

Sidney Powell Confirms to Jan. 6 Committee That Donald Trump Asked Her to Be ‘Special Counsel to Address the Election Issues’ 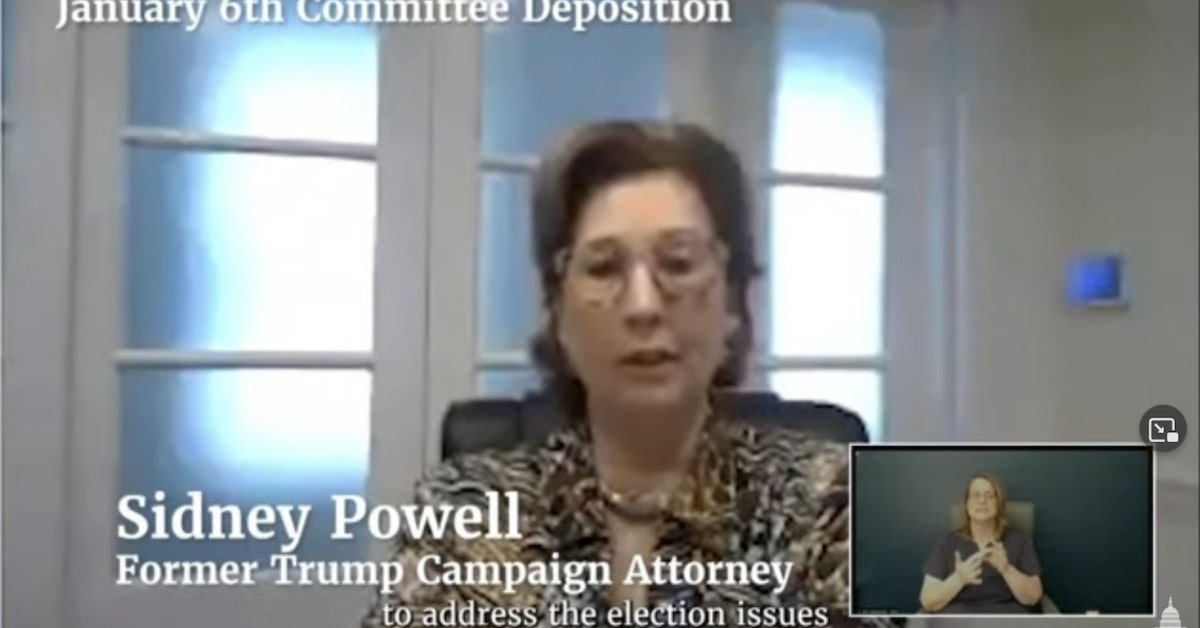 So-called “Kraken” lawyer Sidney Powell, whose failed litigation to overturn the Joe Biden’s victory left her sanctioned by a federal judge and fighting ethics complaints, told the Jan. 6 Committee that former President Donald Trump asked her to be special counsel to investigate the 2020 election.

That Trump sought to install Powell in that role had been widely reported since December 2020, just months after the election. Some seven months later, Powell’s schemes to overturn Joe Biden’s victory would lead to her fighting to keep her law license after a federal judge sanctioned her for her “historic and profound abuse of the judicial process.”

Powell confirmed the conversation to the committee, whose Thursday hearing showed the bizarre theories Trump and his allies peddled in an effort to discredit the election.

“[Trump] had asked me to be a special counsel to address the election issues and to collect evidence, and he was extremely frustrated with the lack of — I would call it — law enforcement agencies that are supposed to protect the rule of law and our republic,” Powell said.

Named after the mythical octopus-like creature dramatized in the Hollywood blockbuster Clash of the Titans, the “Kraken” refers to Powell’s suite of four federal lawsuits in Michigan, Georgia, Wisconsin, and Arizona. All four of the lawsuits failed before both judges appointed by Democrats and Republicans.

In the Michigan litigation, Powell’s team submitted anonymous affidavits by a witness code named “Spyder” and a so-called intelligence expert, both later unmasked by the Washington Post in stories reporting they inflated their credentials.

On Aug. 25, 2021, the judge presiding over the case referred Powell and her co-counsel, including Lin Wood and seven other attorneys, committed a “historic and profound abuse of the judicial process,” to disciplinary proceedings for possible suspension or disbarment.

Powell had been fighting an ethics complaint filed by the State Bar of Texas this week, but the court reportedly let the case against her proceed.

The “Kraken” cases weren’t the only wild conspiracy theories entertained by the Trump White House on the 2020 election.

“Why can’t we just work with the Italian government?” Perry proposed in a text message to Trump’s then-chief of staff Mark Meadows on Dec. 31, 2021.

When he learned that Trump officials entertained those theories, former Acting Attorney General Jeffrey A. Rosen said they were “Pure insanity.”

All three witnesses at Thursday’s hearing — Deputy Attorney General Richard Donoghue, former Assistant Attorney General for the Office of Legal Counsel Steven Engel, and Rosen — threatened to resign. Trump was warned that if he made Clark attorney general he would see “mass resignations” at the Department of Justice, and Clark would preside over a “graveyard,” the Committee heard.

(Screenshot from the Jan. 6th Committee)