‘He Has Expressed No Remorse’: Former Trump Strategist Steve Bannon Sentenced to Four Months in Jail for Contempt of Congress 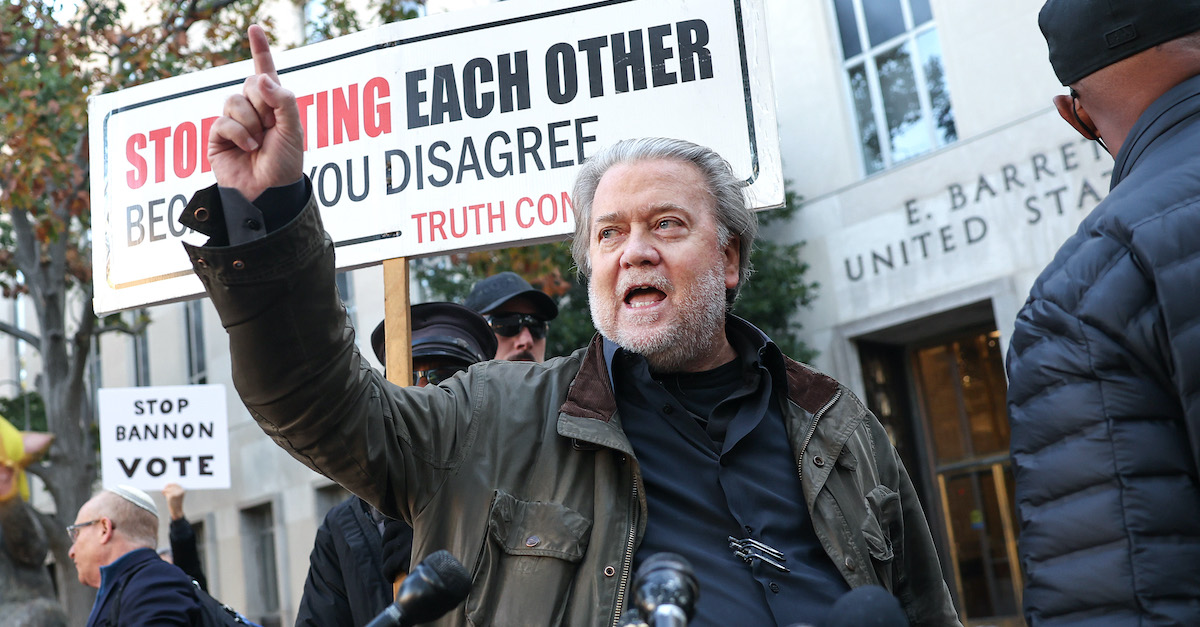 Former Trump White House senior advisor Steve Bannon speaks to the media as he arrives at federal court to be sentenced on Oct. 21, 2022 in Washington, D.C. (Photo by Kevin Dietsch/Getty Images)

It is possible that Bannon will not serve a day of his sentence, as Nichols allowed him to remain a free man until his appeals have resolved. If he does not file an appeal, Bannon must self-surrender by Nov. 15.

Earlier in the proceedings, Nichols said of Bannon: “He has expressed no remorse for his actions.”

Bannon, for his part, declined to speak in court.

“My lawyers have spoken for me, your honor,” the ex-White House strategist said.

Moment earlier, one of Bannon’s lawyers delivered a defiant soliloquy denying his client did anything wrong.

In July, a jury convicted Bannon on two counts of the charge, for his defiance a subpoena for documents and for a deposition. The jury took fewer than three hours to deliberate. Before trial, Judge Nichols had barred Bannon’s anticipated defenses at trial, largely finding them irrelevant to his charged crimes.

Federal prosecutors have asked for Nichols to impose what they call the “most severe guidelines-compliant sentence” available: six months behind bars. They have argued in their sentencing memo that “a person could have shown no greater contempt” than Bannon in his defiance of Congress, and they echoed a similar sentiment in court.

“Throughout, he has acted as if he is above the law. He is not,” Assistant U.S. Attorney J.P. Cooney said.

Bannon’s attorney David Schoen, who was Trump’s impeachment lawyer, said he could envision a worse thumbing of nose at Congress.

“A more egregious contempt of Congress would have been: ‘Screw you, Congress! Take your subpoena, and shove it!'” Schoen said.

Though each count of conviction carries a maximum one-year sentence, Bannon never has been convicted of a crime, and the federal sentencing guidelines recommend a far lower range than two years imprisonment.

Schoen’s co-counsel Evan Corcoran also has represented Trump. Both have argued that Bannon does not deserve to go to jail because he followed the advice of another lawyer: Robert Costello, the Rudy Giuliani associate who reportedly dangled a pardon to Michael Cohen in an episode recounted in the Mueller report.

Accusing the government treating his client differently than other defendants, Schoen branded this alleged phenomenon “Bannon rule.” As an example, Schoen pointed to a precedent when the Justice Department argued that no mandatory minimum applied to a defendant convicted of contempt, but they now note that the statute expressly includes a one-month minimum term of incarceration. Schoen argued that the government’s latter position must be rejected, under the doctrine of collateral estoppel.

Assistant U.S. Attorney Cooney acknowledged that, in that prior case, the Justice Department made a mistake.

“Candidly, Your Honor, we get it wrong sometimes,” Cooney said, arguing that there’s no other way to read the statute than on its plain terms.

On that point, Nichols agreed and accepted that the mandatory minimum applied. That ruling made certain that Bannon would have some jail time.

After Schoen tried to challenge that decision, Nichols said, sharply: “You’ve made that argument. You’ve preserved it. I reject it.”

The litigation position of Bannon’s closing pitch was remorselessness, and his attorney said bluntly: “It’s a case in which, quite frankly, Mr. Bannon should make no apology.”

Schoen added the motivation of Bannon’s actions was his adherence to what he believed the Constitution required.

According to Schoen, the conduct that led to Bannon’s convictions ought to be commended.

“That’s the kind of conduct that you should encourage in this country,” he said.

In addition to his contempt of Congress sentence, Bannon also faces prosecution in New York for allegedly scheming to defraud donors to We Build the Wall, a crowdfunding effort to build a barrier on the U.S.-Mexico border. Trial in that case has been scheduled for November 2023.