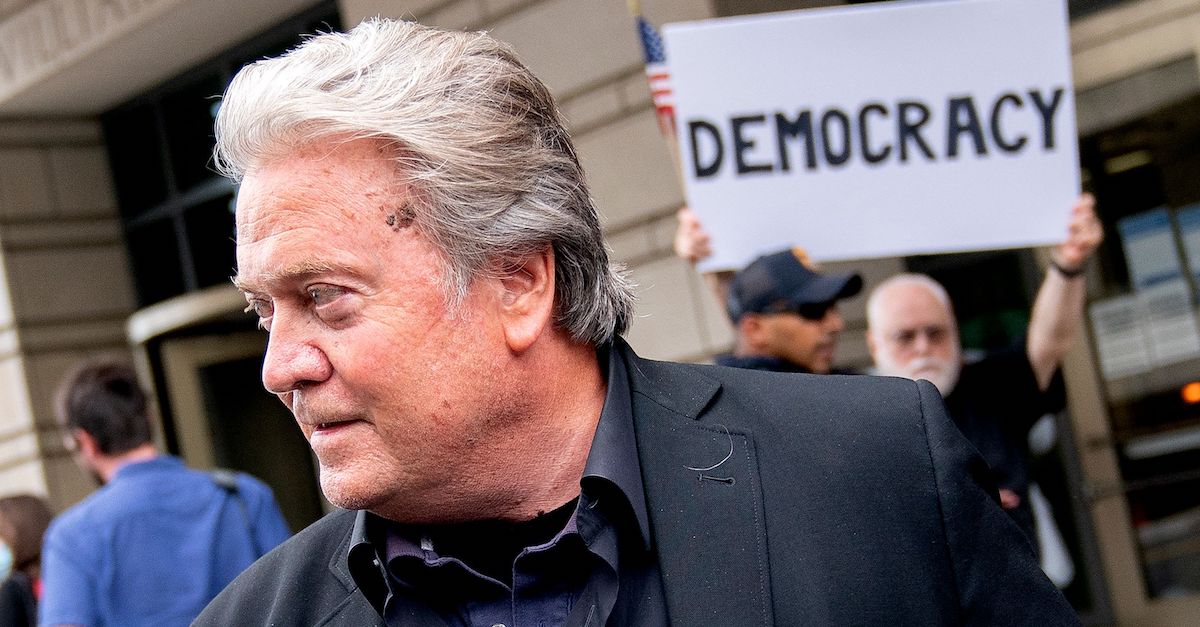 Calling his actions an affront to the rule of law, federal prosecutors asked for former White House chief strategist Steve Bannon to serve six months behind bars, the “most severe guidelines-compliant sentence” available.

“The rioters who overran the Capitol on January 6 did not just attack a building—they assaulted the rule of law upon which this country was built and through which it endures,” the conclusion of the prosecutors’ sentencing memo begins. “By flouting the Select Committee’s subpoena and its authority, the Defendant exacerbated that assault. To this day, he continues to unlawfully withhold documents and testimony that stand to help the Committee’s authorized investigation to get to the bottom of what led to January 6 and ascertain what steps must be taken to ensure that it never happens again. That cannot be tolerated.”

“Respect for the rule of law is essential to the functioning of the United States government and to preserving the freedom and good order this country has enjoyed for more than two centuries,” prosecutors add. “The Defendant’s bad-faith strategy of defiance and contempt deserves severe punishment.”

In July, a federal jury convicted Bannon on two counts of contempt of Congress: one for flouting a subpoena for documents and other the ducking a deposition. The jury took fewer than three hours to deliberate.

More than a year has passed since the Jan. 6 Committee first subpoenaed Bannon on Sept. 23, 2021, noting that he and other allies of then-President Donald Trump gathered at the Willard Hotel the day before the attack on the Capitol.

On his podcast on Jan. 5, 2021, Bannon predicted: “All Hell is going to break loose tomorrow.”

Bannon let the October deadlines for testimony and documents pass, “searching for an excuse not to comply,” prosecutors say.

According to the sentencing memo, Bannon’s defiance continues through to the present day.

“Not once since he was served by the Select Committee with a subpoena or documents and testimony has the Defendant, up to and including through his guilty verdict, undertaken a serious effort to comply with his obligations under the law,” the memo states. “Still to this day, the Defendant has not produced a single document or—except preconditioned on making a spectacle through public testimony or in exchange for the delay and dismissal of his case—endeavored to appear for the deposition required by the subpoena.”

Only shortly before Bannon’s trial, prosecutors say, did the former Trump strategist try to use the information he withheld from the committee — and even then, only as “leverage.”

“In July 2022, shortly before his trial was set to begin and after consuming nine months of this Court’s time and resources, the Defendant attempted to leverage the information he had unlawfully withheld from the Committee to engineer dismissal of his criminal prosecution,” the sentencing memo says. “When his quid pro quo attempt failed, the Defendant made no further attempt at cooperation with the Committee—speaking volumes about his bad faith.”

Indeed, prosecutors say, “a person could have shown no greater contempt” than Bannon.

“From the time he was initially subpoenaed, the Defendant has shown that his true reasons for total noncompliance have nothing to do with his purported respect for the Constitution, the rule of law, or executive privilege, and everything to do with his personal disdain for the members of Congress sitting on the Committee and their effort to investigate the attack on our country’s peaceful transfer of power,” the memo states. “Not once throughout this episode has the Defendant even tried to collect a document to produce, and he has never attempted in good faith to arrange to appear for a deposition. His noncompliance has been complete and unremitting. And his effort to exact a quid pro quo with the Committee to persuade the Department of Justice to delay trial and dismiss the charges against him should leave no doubt that his contempt was deliberate and continues to this day.”

Before his trial, Bannon vowed to turn the proceedings into a “misdemeanor from Hell,” in a press conference with reporters. That laid a consistent tone for his plan to attack the charges.

“Throughout this prosecution, as described above, the Defendant has leveraged his media platform to mock members of the Committee through offensive name calling, deride the Committee’s investigation through rhetoric that risks inspiring violence, and ridicule the criminal justice system through hyperbole,” the memo continues. “The Defendant is entitled to his views and to express them vociferously; there is nothing criminal about the Defendant’s opinions or his expression of those opinions. But this Court may—and should—consider the Defendant’s out-of-court statements to ascertain his motive, evaluate his intent, and measure the degree of his contempt, including appraising his overall disdain and disrespect for the rule of law and the investigative and criminal justice processes that are crucial to maintaining a peaceful, lawful, and orderly society.”

Bannon is slated to be sentenced on Friday, and he is also facing criminal prosecution in New York, where he has been charged with a scheme to defraud donors in We Build the Wall. Trump pardoned Bannon on related federal charges during the twilight of his presidency.