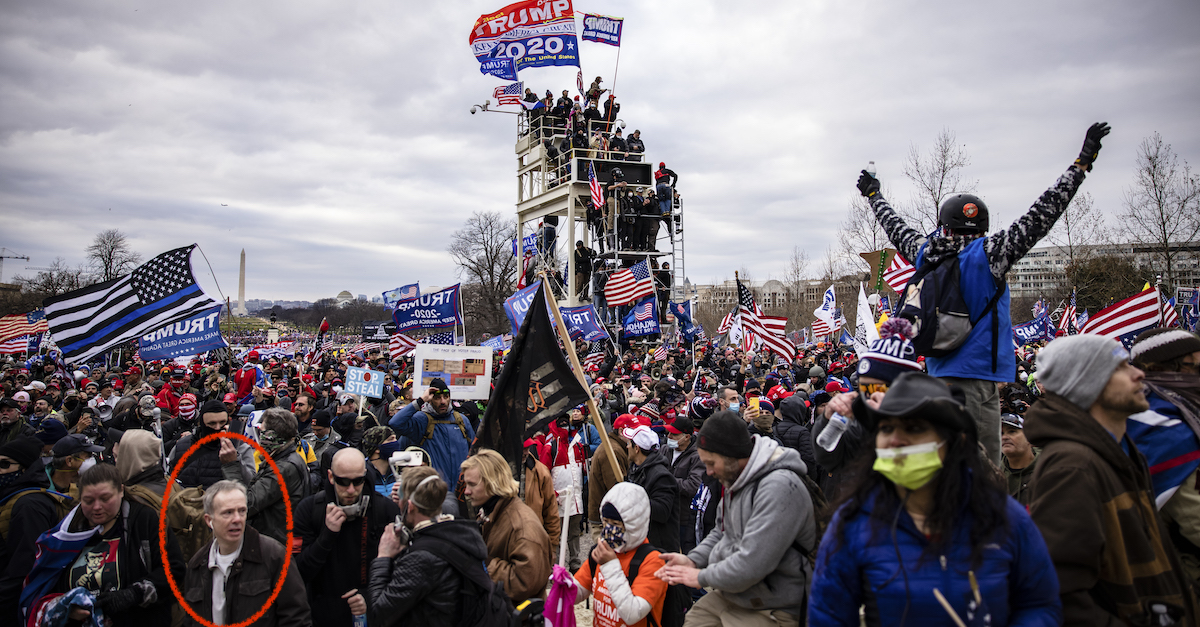 An image which prosecutors say shows John O’Kelly on Jan. 6.

One of the faces in the pro-Trump crowd captured by a professional photographer on Jan. 6 who online sleuths referred to as #Midwhitecrisis has now been identified as a Long Island lawyer, the feds say.

John L. O’Kelly, a 66-year-old East Williston, New York resident, faces several charges for his alleged role in the Jan. 6 attack. Those charges include felonies, such as civil disorder and assaulting, resisting, or impeding police officers, plus the standard Jan. 6 misdemeanors for engaging in physical violence, disorderly conduct, and entering and remaining in a restricted building or grounds.

“According to court documents, on the afternoon of Jan. 6, 2021, O’Kelly illegally made his way to the West front of the Capitol grounds where rioters were fighting with law enforcement officers attempting to maintain a police barrier. At approximately 2:28 pm, O’Kelly emerged from the crowd and grabbed at the baton of an officer, attempting to take the weapon from the officer,” the feds described his alleged actions on Jan. 6. “The officer fought back and was able to keep the baton in his possession. O’Kelly then took a step back and pushed a metal bike rack being used to secure the perimeter into the line of officers.”

According to the FBI’s statement of facts, “[u]sers of the Twitter account @SeditionHunters, which is one of a series of civilian Twitter accounts that crowdsource and share information to help identify FBI BOLOs from the Capitol riot, began using the hashtag #midwhitecrisis to organize the information related to BOLO #294.”

Fast forward a year and the feds were circling the married father’s home.

“Finally, on approximately July 1, 2022, and again on October 5 and October 7, 2022, FBI agents went to the last known residence address for John O’Kelly according to DMV records. On each of these occasions, agents identified an individual believed to be O’Kelly at the home,” documents said. “Based on their observations and review of the footage and photographs from January 6, 2021, the surveillance agent who saw O’Kelly believes that he is the same individual described above who assaulted an MPD officer at the U.S. Capitol.”

Investigators said they used various photos to help identify O’Kelly, including one on the Lawyers’ Committee for 9/11 Inquiry website, on which O’Kelly warms to the idea that explosives destroyed the World Trade Center on 9/11.

The official explanation of the events on and surrounding 9/11 has not been established in a court of law or by an objective and thorough investigation by either Congress or the 9/11 Commission. Our overall mission is to develop and implement a detailed legal strategy to achieve transparency and accountability under the law, regarding the unprosecuted crimes of 9/11.

In the aftermath of September 11, 2001, the Congress initiated the “Joint Inquiry” and the government eventually also created the 9/11 Commission to investigate and explain what had occurred. Almost immediately, and in the years thereafter, serious questions were raised about both the Joint House and Senate Intelligence Committees’ Inquiry and the 9/11 Commission’s version of the events surrounding 9/11. Many observers, including notably the families of the victims, criticized both inquiries for failing to address key questions.

O’Kelly’s role in the group was also made clear on the website: “co-counsel in the lawsuit in the U.S. District Court for the Southern District of New York which seeks to compel the U.S. Attorney to present the Lawyers’ Committee’s evidence regarding the use of explosives to destroy three World Trade Center buildings on 9/11 to a special grand jury.”

The feds said they also learned that O’Kelly had a Jan. 5 reservation at the Residence Inn Arlington Ballston hotel.

New York attorney records show O’Kelly is a currently registered lawyer who was admitted to the bar back in 1985 after going to law school at St. John’s University.