‘Political Cover’: McConnell Could Move on Impeachment by Friday, But Legal Experts Suggest the GOP Is Just Playing Games 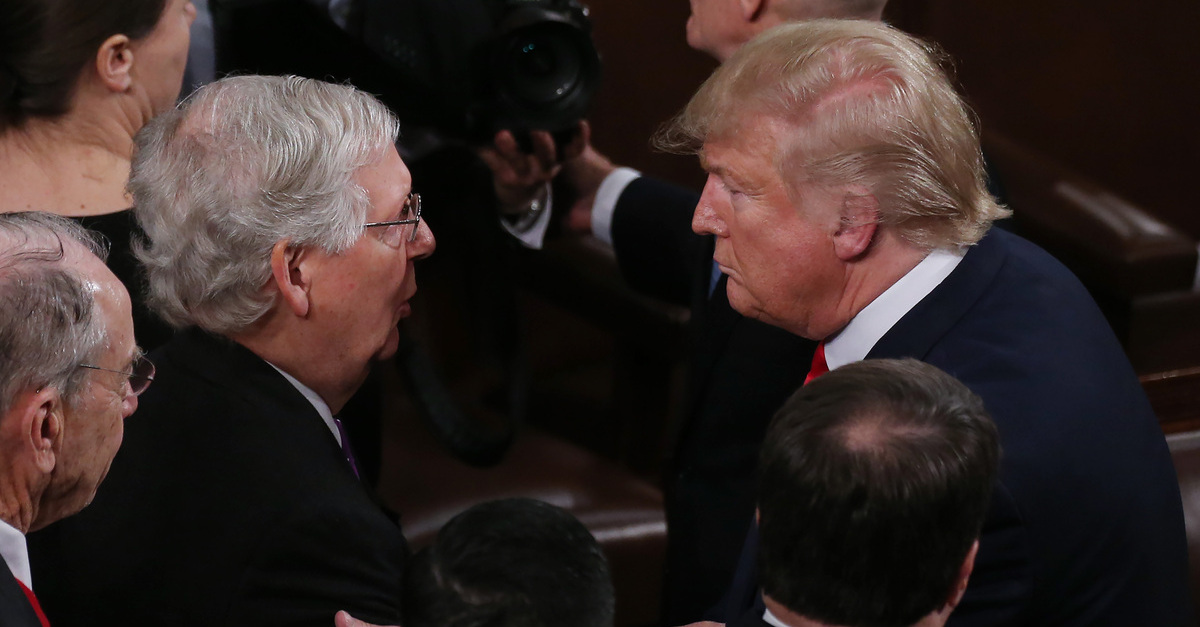 U.S. President Donald Trump (R) greets Majority Leader Sen. Mitch McConnell (R-KY) after delivering his State of the Union address in the chamber of the U.S. House of Representatives on February 04, 2020 in Washington, DC.

Update: Multiple outlets have now reported that Republican leadership in the U.S. Senate have foreclosed against says a quick impeachment trial after initially discussing the possibility.

Combine this with top Republican lawyer Michel Luttig saying impeachment is impossible after the end of the term in office and you have McConnell, who is "for" impeachment, yet is the main impediment to it occurring. https://t.co/6mnyoNbSWP

The U.S. Senate could begin an impeachment trial of President Donald Trump as early as this Friday over his responsibility for the deadly and unprecedented siege on the U.S. Capitol last week. Legal experts, however, cautioned that the GOP’s potential epiphany is all-but self-serving.

According to journalist Richard Cowan with the Reuters wire service, citing “a source familiar with the deliberations,” Republican leaders are currently weighing “whether to launch a trial on Friday on whether to remove [the 45th president] from office.”

“This is a big deal because it raises the possibility of convicting Trump while he’s still in office and [Vice President Mike] Pence taking over,” self-described “recovering lawyer” and current Reuters legal writer Jan Wolfe noted. “A lot has to happen first. But you can’t rule anything out at this point. A Senate trial could, in theory, be very quick.”

Much of that would-be expediency depends upon the most powerful GOP member of the U.S. Congress: soon-to-be-former Majority Leader Mitch McConnell (R-Ky.).

As Law&Crime previously reported, Trump’s erstwhile political ally and legislative sheepherder throughout the past four years appears to have recently come down with a dime-turning change-of-heart.

McConnell, who has apparently and finally exhausted his well of federal judges to appoint, is reportedly “pleased” that the U.S. House of Representatives is moving forward with a second impeachment effort against the president and has signaled that he may, in fact, actually vote to convict and remove–an extraordinary shift precipitated by the president’s drag on the Republican Party.

Legal commentators broadly suggested that McConnell’s eleventh-hour bid to divorce himself and his Republican Party from Trump were largely motivated by cynical considerations of realpolitik and power.

“The only circumstances I can envision in which Leader McConnell agrees to call back the Senate early for a trial on Friday is if he not only is prepared to vote to convict in his own right, but also believes there are sufficient Republican members prepared to do so that would meet the two-thirds threshold and who are simply looking for political cover from leadership,” national security attorney Bradley P. Moss told Law&Crime in an email.

“If McConnell actually supports conviction he may want to take [incoming Senate Majority Leader Chuck] Schumer up on a quick trial,” Garber told Law&Crime. “He could make [a] credible statesman move and ask Trump to resign (see Nixon) [in order to] avoid a long, ugly trial.”

Such a move, Garber added, would potentially reap myriad institutional and political benefits for the beleaguered GOP such as avoiding a “prolonged focus on [Republican] problems” and thorny issues concerning “Senate jurisdiction post-presidency.”

Drexel Kline School of Law Professor David S. Cohen said it was all about control.

“One overlooked reason I think this might happen – if the trial starts Friday, McConnell controls it,” Cohen said via Twitter. “If it starts after Warnock/Ossoff/Harris are sworn in, Schumer controls. Mitch probably wants to determine how it proceeds. He has one week to do so.”

The U.S. House of Representatives introduced a lone article of impeachment against Trump on Tuesday calling the president “a clear and present danger to the Constitution and our democracy” having incited an insurrection. The lower chamber is scheduled to vote on that article late Wednesday afternoon–just over one week after the president’s shock troops forced the national seat of government into crisis mode and members of Congress into a state of panic and hiding.

Editor’s note: this story has been amended post-publication to account for additional developments on the impeachment front.