Defense Lawyer Claims Trump Had No Idea Pence Was in Danger on Jan. 6. The Record Indicates Otherwise. 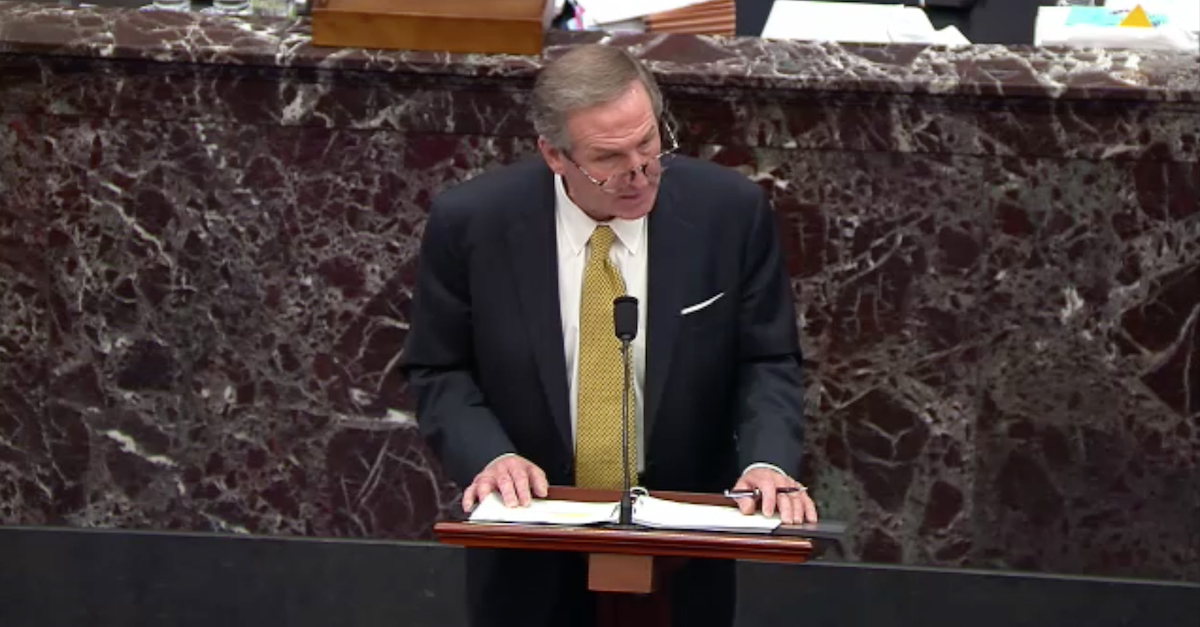 Attorneys representing Donald Trump in his Senate impeachment trial on Friday claimed that the former president had no idea his Vice President Mike Pence was in any sort of danger several minutes into the Jan. 6 insurrection at the U.S. Capitol Complex in Washington, D.C.

After the defense rested its case and members were permitted to ask the opposing party questions, Republican Sens. Mitt Romney and Susan Collins inquired as to what Trump knew and when in regard to Pence’s safety.

“When Trump sent the disparaging tweet at 2:24 p.m. regarding Pence, was he aware that the Vice President had been removed from the Senate by the secret Service for his safety,” the question read.

The tweet on Trump’s since-banned Twitter account read: “Mike Pence didn’t have the courage to do what should have been done to protect our Country and our Constitution, giving States a chance to certify a corrected set of facts, not the fraudulent or inaccurate ones which they were asked to previously certify. USA demands the truth!”

Earlier this week, both Romney and Collins broke from the majority of the GOP lawmakers, voting in favor of the constitutionality of trying the former president in the Senate.

“The answer is no,” Trump’s attorney Michael van der Veen stated in response to the Romney-Collins question about Trump’s knowledge. “At no point was the president informed the vice president was in any danger. Because the House rushed through this impeachment in seven days with no evidence, there is nothing at all in the record on this point because the House failed to do even a minimum amount of due diligence.”

Trump defense lawyer Michael van der Veen: "At no point was the president informed the vice president was in any danger."

(GOP Sen. Tuberville said on record that he was on the phone with Trump as Pence was being ushered out.)pic.twitter.com/jFNih7wp0k

But van der Veen’s response ignored that Republican Senator and unyielding Trump supporter Tommy Tuberville of Alabama had previously provided reporters with a detailed account of a conversation he had with the president just after Pence had been evacuated from the Senate chambers amid the Jan. 6 chaos.

“I said ‘Mr. President, they just took the vice president out, I’ve got to go,’” Tuberville told Politico on Wednesday. According to the report, “Pence was evacuated from the chamber at about 2:15 PM” while the rest of the Senate was cleared by approximately 2:30 p.m.

Tuberville’s account did not describe a calm and safe situation, but rather a spiraling scene that required a sense of urgency and immediate action—such as, evacuating the vice president.  Trump had also sent a tweet saying Pence did not have “courage” to do something that Pence had no power to do—a continuation of what the former president said one day prior to the violence.

In any event, Van der Veen said that House managers didn’t bother to investigate this further.

In response to a Q from Collins and Murkowski about exactly when Trump learned of the breach and what steps he specifically took to end the attack, Van Der Veen says the House managers didn't investigate and didn't give any information on that.

(They did ask Trump to testify).

Van der Veen says, Jimmminy crickets there is no due process.

So … let’s call that client.

Van der Veen appeared increasingly irritated by the Senators’ questions, at one point demanding to know which member of the chamber submitted a particular question about the true winner of the 2020 election.

“Are the prosecutors right when they claim that Trump was telling a big lie, or in your judgment did Trump actually win the election?” read the question from Sen. Bernie Sanders.

“My judgment,” an incredulous van der Veen replied. “Who asked that?”

“I did,” Sanders immediately responded.

“My judgment’s irrelevant in this proceeding, it absolutely is,” van der Veen said as members could be heard gasping and murmuring so loudly that Sen. Patrick Leahy, who is presiding over the trial, was forced to gavel down the chamber.

Van der Veen previously filed a lawsuit against Trump noting that the case arose because Trump repeatedly claimed “voting by mail is ripe with fraud, despite having no evidence in support of these claims […].”

Not long after this story was posted, additional and explosive information about Trump’s state of mind on Jan. 6 came to light.

This is very significant. There should be testimony about it. Still time for House managers to ask for witnesses. https://t.co/mLULLfulZw

Sen. Tuberville, for his part, stood by his story.

Trump's lawyers dismissed it as "hearsay" during the trial today. It's a key point that several Republicans considering conviction asked about and got no answer from Trump's team.