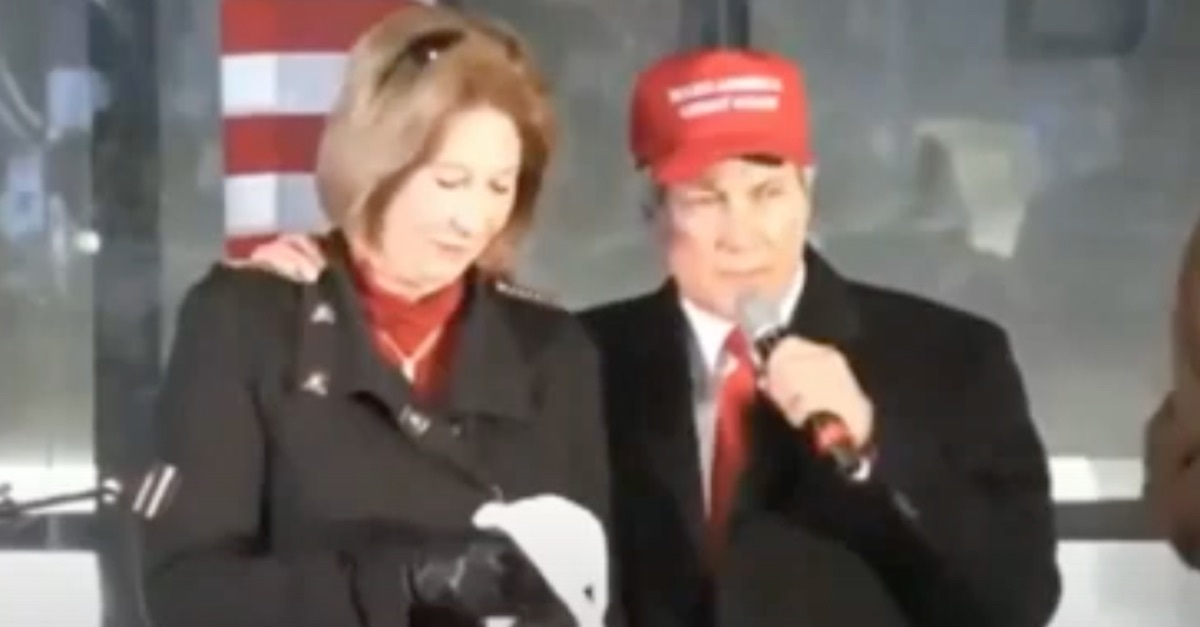 In a 62-page response to a motion for sanctions, attorneys connected with Sidney Powell’s so-called Michigan “Kraken” lawsuit railed against state and local authorities for asking a judge to issue sanctions against Powell and her team. The motion calls the request for sanctions “a new form of political retribution.” It also asserts that the state’s requests for sanctions “violate the very rules they claim to enforce.”

“They are not meant to preserve the integrity of the legal profession or to complain about repetitive and vexatious litigation,” the Friday response said. “They are a new form of political retribution. Such abuse of the law has no place in this court and is contrary to the law it hypocritically invokes.”

The “Kraken” plaintiffs’ legal team — now represented by attorney Stefanie Lambert Junttila — is now singing an oddly dissonant tune. In one breath, the team seeks praise from the court for voluntarily dismissing the suit which may now end, if the state and local officials have their way, with sanctions leading up to disbarment. In another breath, the plaintiffs’ legal team digs in on the underlying election malfeasance claims the “Kraken” lawsuit ultimately failed to convincingly prove.

As to the former, the filing reads:

Plaintiffs have voluntarily dismissed their complaint as amended, rendering all defense motions to dismiss moot. The State Defendants’ newest request for sanctions under 28 U.S.C. § 1927 is barred as a matter of law and must be denied for reasons more fully explained in the Memorandum in Support below filed pursuant to Local Rule 7.1(d)(1)(A).

As to the latter (emphasis in original):

As explained in Plaintiffs’ prior responses to the seriatim motions for sanctions filed by the State Defendants and the Intervenors, the pleadings in this case were supported by hundreds of factual and expert affidavits, as well as substantial documentation. Together, the filing amounts to nearly 1,000 pages. State Defendants’ conclusory and disingenuous arguments that Plaintiffs filed this case with no evidence and with unfounded allegations is belied by the voluminous record before this court. There is no basis whatsoever for sanctions against the Plaintiffs. Further, if this Court were inclined to give any serious regard to the instant motion, Plaintiffs request a full Evidentiary Hearing to present evidence in support of the Plaintiffs’ claims.

Later, many pages further along, the plaintiffs’ attorneys called their original “Kraken” case a “good faith legal argument” and characterizes the case as one which attempted to assert that individual electors have standing to assert “a cognizable interest in ensuring that the final vote tally reflects the legally valid votes cast” in an election. (A circuit split, they assert, currently exists, and it must be cleared up.)

The plaintiffs’ attorneys then characterized the move for sanctions as something akin to a constitutional battle. They frame the question presented by the case as “[w]hether sanctions can be imposed . . . for the mere filing of a substantial complaint supported by sworn affidavits and in violation of the core of the Constitution: the Right to Petition the government for grievance.”

At one previous point in the contested litigation, the state intervenors and defendants tried to link violence at the U.S. Capitol on Jan. 6 with the ‘Kraken’ plaintiffs’ claims.  The violence, the state actors said, was “the terrible by-product of Plaintiffs’ and their counsels’ efforts.” They also said “there is blood on Lin Wood and Sidney Powell’s hands and on the hands of all those who pushed this lawsuit.”

The “Kraken” team shot back at that assertion: “This is a reckless and defamatory claim—such egregious slander it should not be countenanced by a court of law.” Moreover:

As a reminder to this court, Plaintiffs’ TRO was denied on December 7, 2020. There is no evidence that Plaintiffs’ filing had anything to do with the conduct of a small cadre of people on January 6 at the Capitol. None. And the proponents of these outrageous comments know this. Yet, they are using this Court as a stage to make outrageous political statements and smear the reputation of outstanding lawyers who have practiced in the greatest traditions of the bar for decades. Such political mudslinging and smear campaign should not be countenanced by this Court.

What follows is a rancorous defense of tweets and statements by Sidney Powell which defended the Jan. 6 events at the Capitol.

A Powell retweet which (per the filing) referred to the Jan. 6 siege as a “last resort” for people “to petition the government for grievances” was excusable, the filing argues, because it was “re-tweeted long after the incident at the Capitol was well underway . . . and simply means ‘seeking justice denied by authority’ — which is an old concept.”

Other public comments, the filing argues, are protected by the so-called “litigation privilege” which allows attorneys to talk about what they’re doing in court.

The document goes on to accuse the state actors of committing their own professional conduct violations. Again, from the court papers:

State Defendants put out headlines and talking points under the official color of law and the authority of their offices to attempt to punish Ms. Powell, and improperly influence this Court through whipping up massive press converge and negative public opinion against Plaintiffs and their counsel and undisputedly seeking to destroy their reputations. This court should say, “no.” It will not participate in this frenzied political witch hunt by giving credit to sanction motions that are frivolous.

The “Kraken” team then articulates a relatively novel reading of Rule 3.6 of the Michigan Rules of Professional Conduct which prevents attorneys from saying things to the press that “will have a substantial likelihood of materially prejudicing an adjudicative proceeding” in a matter. The rule generally is applied against attorneys who trash opposing parties or defendants with comments that are not concomitantly contained either in court papers or in oral arguments. There are a number of critical exceptions — including something that is akin to the “litigation privilege” the ‘Kraken’ team articulated above in its own defense — which go unexplored in the preceding arguments.

After pages of other arguments, the plaintiffs’ attorneys again lamented that their widely debunked claims of election jiggery-pokey were never fully litigated:

Plaintiffs’ counsel submitted well over two hundred sworn declarations and affidavits, by both fact witnesses and experts. Nevertheless, Plaintiffs have had no opportunity to have those witnesses examined or their credibility even questioned – or access to any discovery that is usually afforded in civil cases.

Plaintiffs raised constitutional issues crucial to the foundations of this Republic.

But, they admit (and lament some more):

There is a disagreement about the significance of the facts and testimony supporting Plaintiffs’ complaint, particularly with respect to the allegations of differential weighting of Republican and Democratic votes by Dominion voting machines, discriminatory enforcement (or nonenforcement) of state election laws, and other illegal and discriminatory conduct at the TCF Center described in sworn eyewitness testimony. Plaintiffs alleged that this illegal and unconstitutional conduct did not affect all voters equally, and that it resulted in counting of illegal votes predominantly for Democrats and not counting legal votes for Republican voters. This Court found that Plaintiffs’ allegations could not support these claims and dismissed eyewitness statements in sworn testimony who believed that they observed vote switching or destruction, as unsupported, and similar allegations as “theories, conjecture, and speculation that such alterations were possible.” ECF No. 62 at 34. But these are precisely the types of credibility determinations that could have been made at an evidentiary hearing, and allegations that could have found additional evidentiary support through discovery if it had that been permitted.

Well more than a dozen pages are then dedicated to rehashing what Powell’s team believes went wrong with the 2020 election. And that is what they ultimately ask the court to provide:

Plaintiffs respectfully request the court deny the motion for sanctions for all of the reasons stated herein; and otherwise, Plaintiffs request an Evidentiary Hearing so that the evidence in the Complaint may be open to discovery and full examination.

Kraken Response to Motion -… by Law&Crime