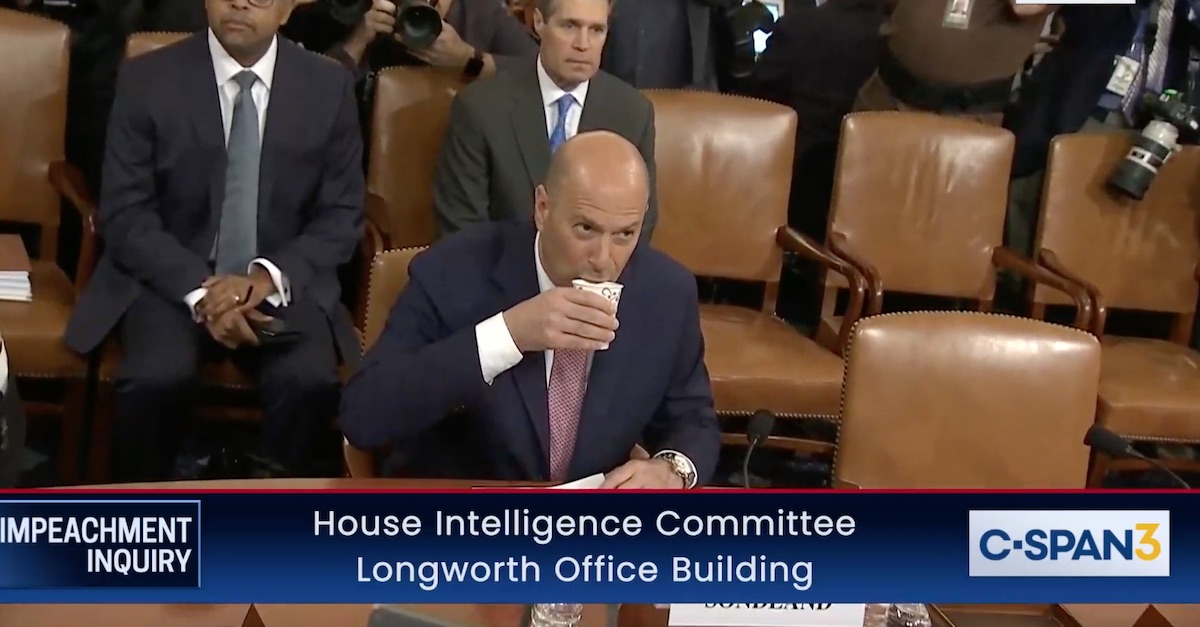 U.S. Ambassador to the EU Gordon Sondland, a Trump appointee and longtime Republican donor who gave $1 million to Trump’s inauguration, answered a key question in his much-anticipated opening statement on Wednesday: “Was there a ‘quid pro quo?’ With regard to the requested White House call and White House meeting, the answer is yes.”

Sondland not only confirmed the push for the quid pro quo came from the top, but also said he acted at the “express direction” of the president to secure the deliverable. Sondland also blamed State Department stonewalling for discrepancies in his testimony.

The State Department told Sondland he couldn't have his staff gather information & records for the hearing. That's an incredible effort to impede his testimony. He's testifying about his activities as a government official. The Trump administration is subverting the Constitution.

Shorter Sondland: the State Department made me lie because they kept all my records. That sounds obstructiony.

Clever move by Sondland: blame the Administration withholding documents for his failure to mention the July 26 call before. Offers an explanation (not super plausible, but an explanation) for not previously mentioning the call, and (rightly) blames Administration for stonewalling

Sondland is the ambassador President Trump spoke with on the phone after top U.S. diplomat to Ukraine Bill Taylor texted Sondland on Sept. 9, “As I said on the phone, I think it’s crazy to withhold security assistance for help with a political campaign.” Sondland responded to Taylor around five hours later, saying that Trump had been “crystal clear: no quid pro quo’s of any kind.” Sondland later admitted that his response was dictated by the president and may not have been truthful.

Sondland was initially ordered not to testify in the impeachment inquiry, but thereafter revised his testimony about the withholding of congressionally appropriated military aid to Ukraine. Sondland’s testimony made waves because he changed a key aspect of his testimony regarding a quid pro quo.

Sondland said there was a conversation with Ukraine about the withheld aid on Sept. 1. That the aid was held up was reported for the first time on Aug. 28/29. The aid was released on Sept. 11, Trump said, at the urging of Sen. Rob Portman (R-Ohio). Portman was one of the Republicans in 2016 who echoed then-Vice President Joe Biden‘s call to reform the Prosecutor General’s Office in Ukraine. The top prosecutor in place at the time was Viktor Shokin, the prosecutor Biden bragged about getting fired.

According to a Nov. 4 addendum, Sondland said he recently remembered that his marching orders were to precondition aid on whether or not Ukrainian officials complied with a request by Trump to make an announcement. The announcement? That Ukraine was launching an investigation into Joe Biden and his son Hunter Biden over the latter’s prior work for the natural gas company Burisma Holdings:

What Trump wanted from that public announcement, according to George Kent, was “nothing less” than for Ukrainian president Volodymyr Zelensky to utter three specific words: “investigations, Biden, and Clinton.”

To be clear: Trump told Sondland there was no quid pro quo, and Sondland is now explicitly saying that was false. He also said he came to believe that the withheld congressionally appropriated military aid, without there being an explanation for the hold, was part of the effort to get President Zelensky to launch and announce the investigations into the Bidens that Trump and Rudy Giuliani desired.

“In the absence of any credible explanation for the hold, I came to the conclusion that the aid, like the White House visit, was jeopardized,” Sondland says. “My belief was that if Ukraine did something to demonstrate a serious intention [to launch the investigations] then the hold on military aid would be lifted.”

To be even clearer: Sondland said that he worked “at the express direction of the president.”

“I was acting in good faith. As a presidential appointee, I followed the directions of the president. We worked with Mr. Giuliani because the President directed us to do so. We had no desire to set any conditions on the Ukrainians,” he said. “By the end of the August, my belief was that if Ukraine did something to demonstrate a serious intention to fight corruption, specifically addressing Burisma and 2016 server, then the hold on military aid would be lifted.”

“[A]t all times, our efforts were in good faith and fully transparent to those tasked with overseeing them. Our efforts were reported and approved. Not once do I recall encountering objection,” he added.

Sondland even addressed the July 26 call recently remembered by Taylor staffer David Holmes. That call came the day after the Trump call with Zelensky, in which the president asked for investigations into the Bidens and the CrowdStrike conspiracy theory.

Taylor testified that on July 26 his staffer was with Sondland at a meeting with Zelesnky’s aide, Andrey Yermak. Taylor said that after the meeting, the staffer and Sondland went to a restaurant. While at that restaurant, Sondland spoke to President Trump by phone. Holmes told Taylor that they heard Trump asking Sondland about the “investigations.”

“At the time I gave my deposition on October 22, I was not aware of this information. I am including it here for completeness,” Taylor said.

Daniel Goldman, the attorney asking questions for House Democrats, asked Taylor if had “ever seen another example of foreign aid conditioned on the personal or political interests of the president of the United States?” Taylor said he had not.

Goldman also followed up on the new detail.

Taylor confirmed that his testimony was what he meant: that President Trump cared more about probes of the Bidens and Burisma than he did about a U.S. ally’s defense against Russian aggression.

Sondland confirmed in his opening statement that this call happened, but he said he couldn’t remember if the Bidens were discussed.

“The July 26 call did not strike me as significant at the time. Actually, I would have been more surprised if President Trump had not mentioned investigations, particularly given what we were hearing from Mr. Giuliani about the President’s concerns,” Sondland said. “I have no recollection of discussing Vice President Biden or his son on that call or after the call ended.”

I would love to send Ambassador Sondland, a really good man and great American, to testify, but unfortunately he would be testifying before a totally compromised kangaroo court, where Republican’s rights have been taken away, and true facts are not allowed out for the public….

On Nov. 8, President Trump said he hardly knew the Portland hotel magnate/Trump inauguration mega donor he appointed as U.S. Ambassador to the EU.

"I hardly know the gentleman." pic.twitter.com/4n30EQNiFQ