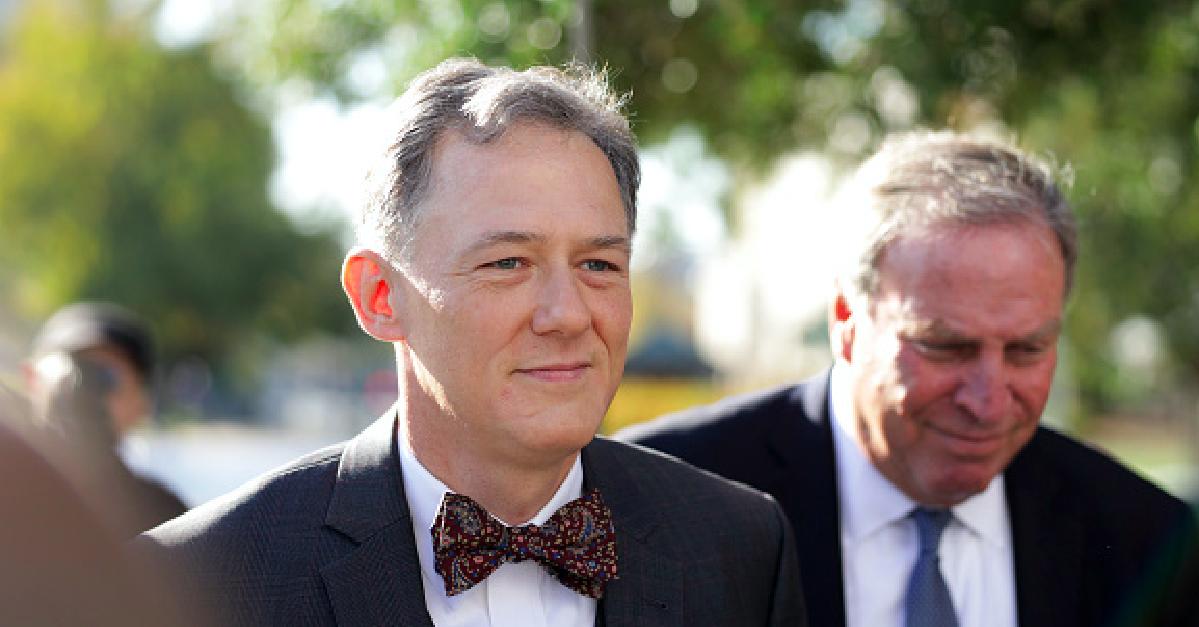 U.S. Deputy Assistant Secretary of State for European and Eurasian Affairs George Kent arrives at a closed session before the House Intelligence, Foreign Affairs and Oversight committees October 15, 2019 at the U.S. Capitol in Washington, DC. Kent was on Capitol Hill to testify to the committees as part of the ongoing impeachment inquiry against President Donald Trump.

We are more than three years removed from the 2016 presidential election, but President Donald Trump remains fixated on his former opponent Hillary Clinton, an impeachment inquiry transcript of State Department official George Kent’s testimony. According to Kent, Trump specifically wanted “nothing less” than for Ukrainian president Volodymyr Zelensky to mention Clinton’s name while publicly announcing investigations into Burisma and the Bidens.

The transcript of Kent’s deposition shed further light on what Trump wanted from a potential Zelensky announcement. He said Trump wanted an announcement to include three specific words: “investigations, Biden, and Clinton.”

“Tim [Morrison] indicated that he had talked to Gordon [Sondland], and Gordon had told him, Tim, and Tim told Bill Taylor, that he, Gordon, had talked to the President, POTUS in sort of shorthand, and POTUS wanted nothing less than [for] President Zelensky to go to [the] microphone and ‘investigations, Biden, and Clinton,’” Kent said of a conversation that took place over WhatsApp as recently as September. 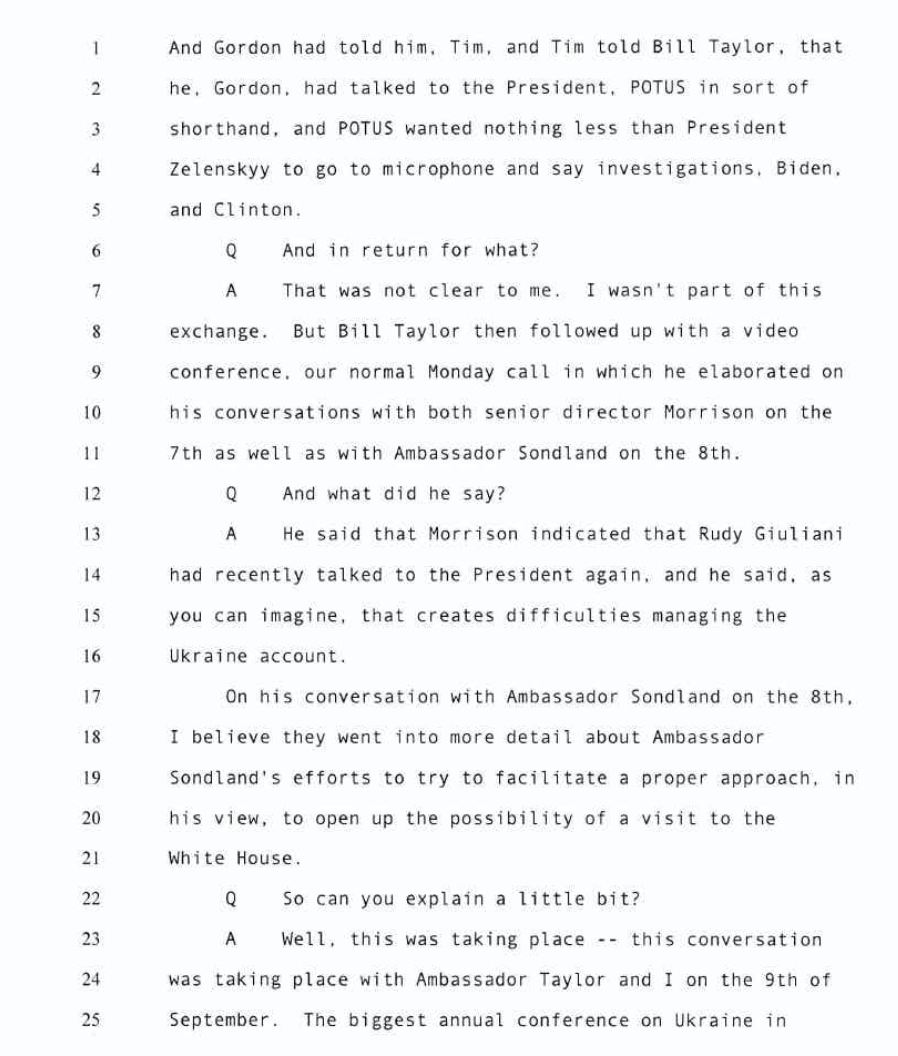 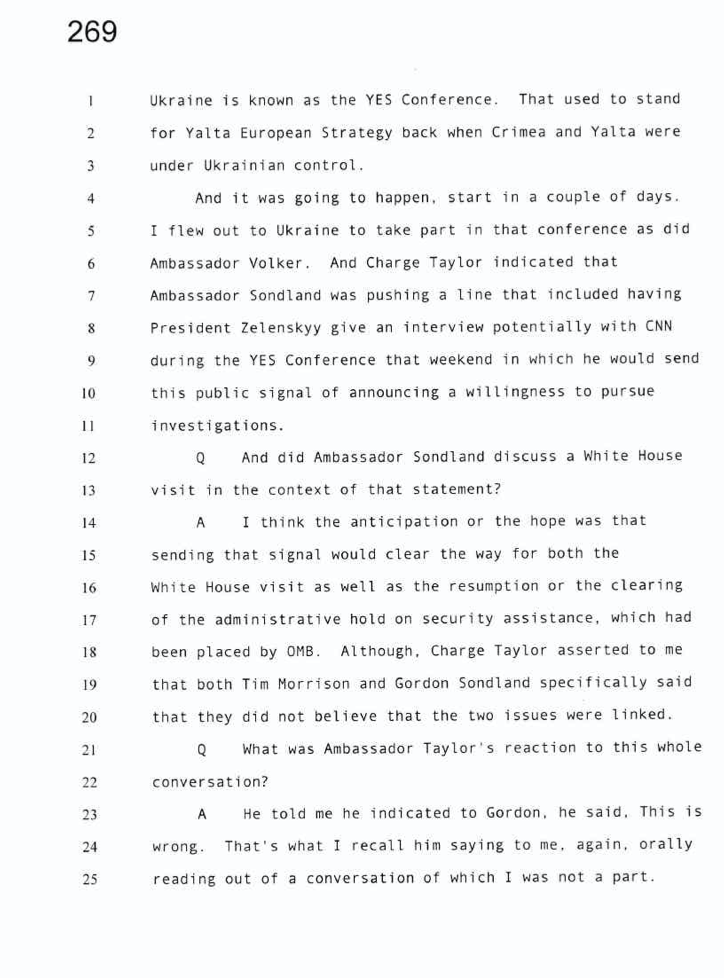 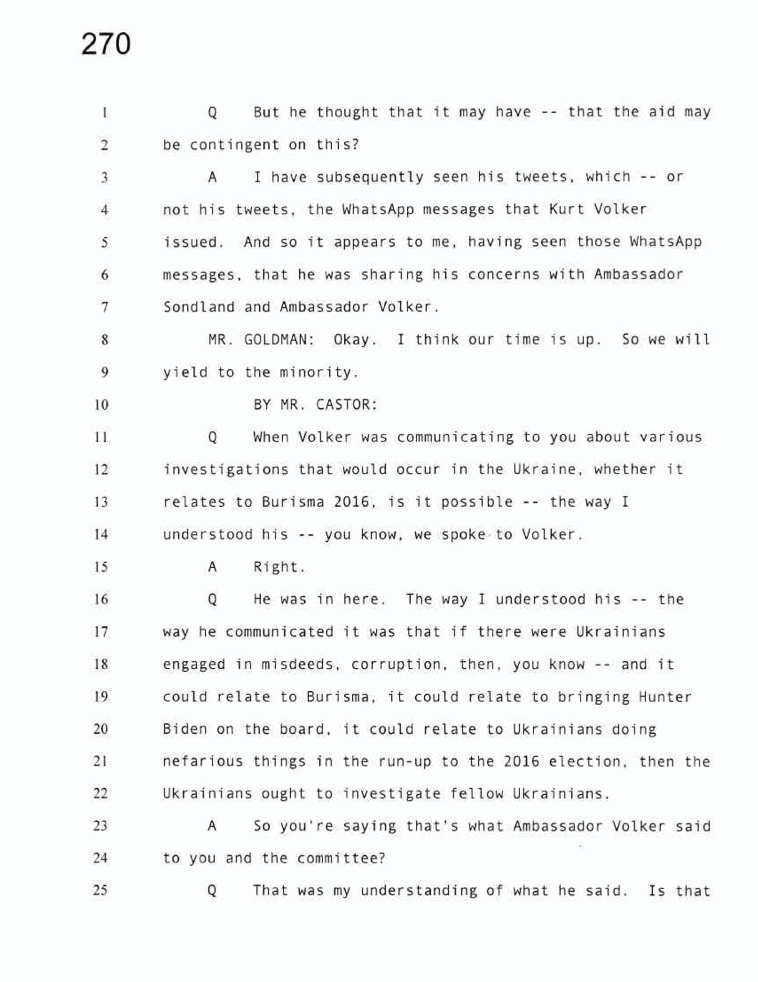 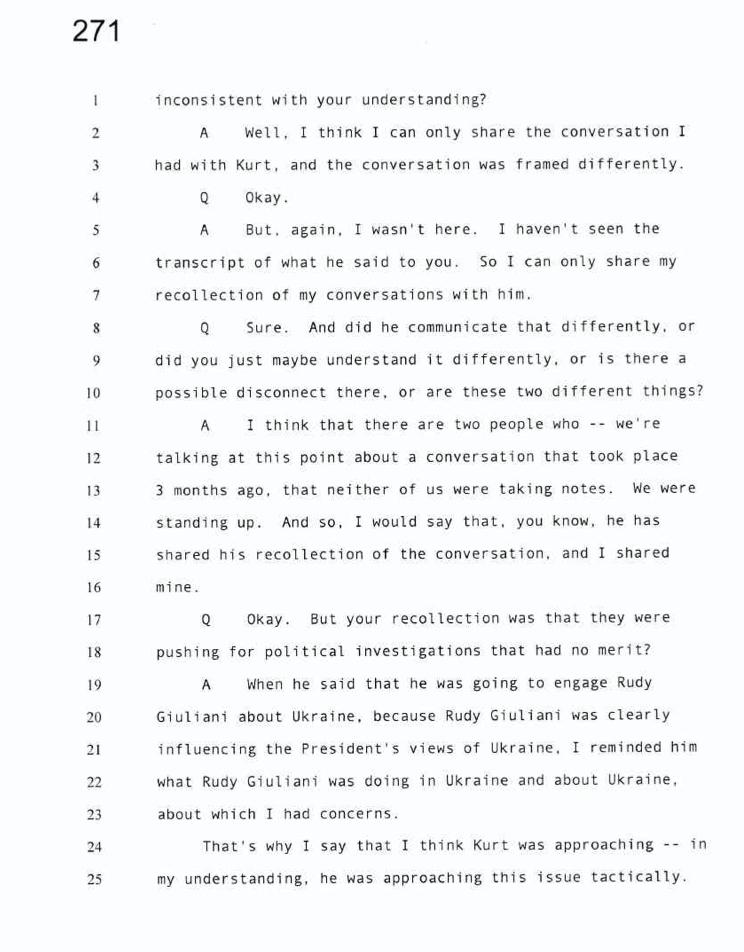 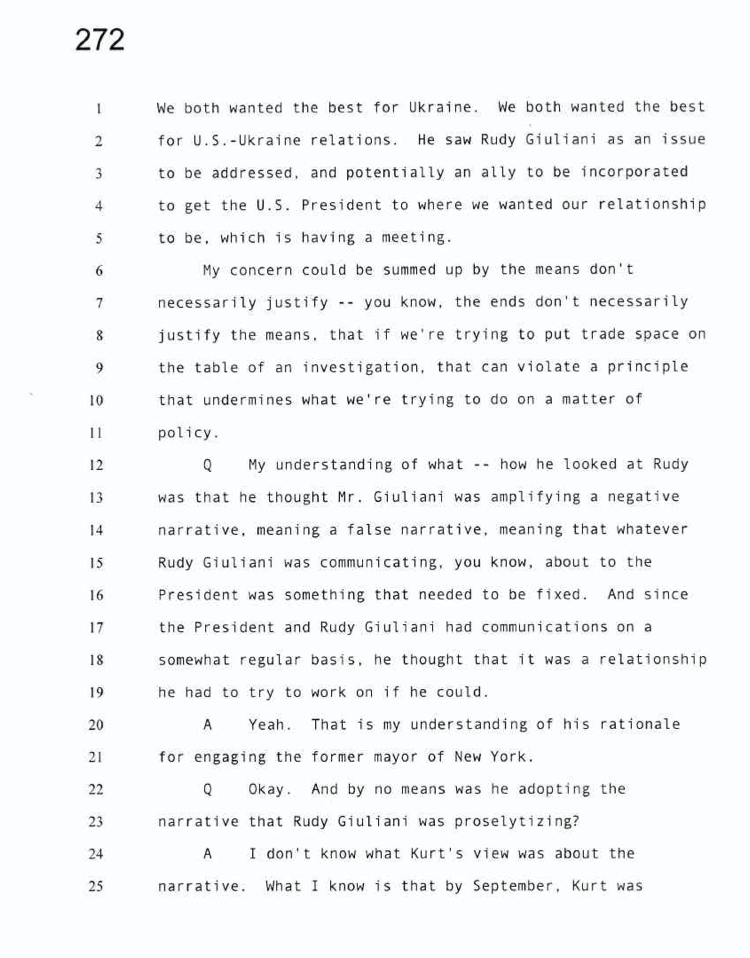 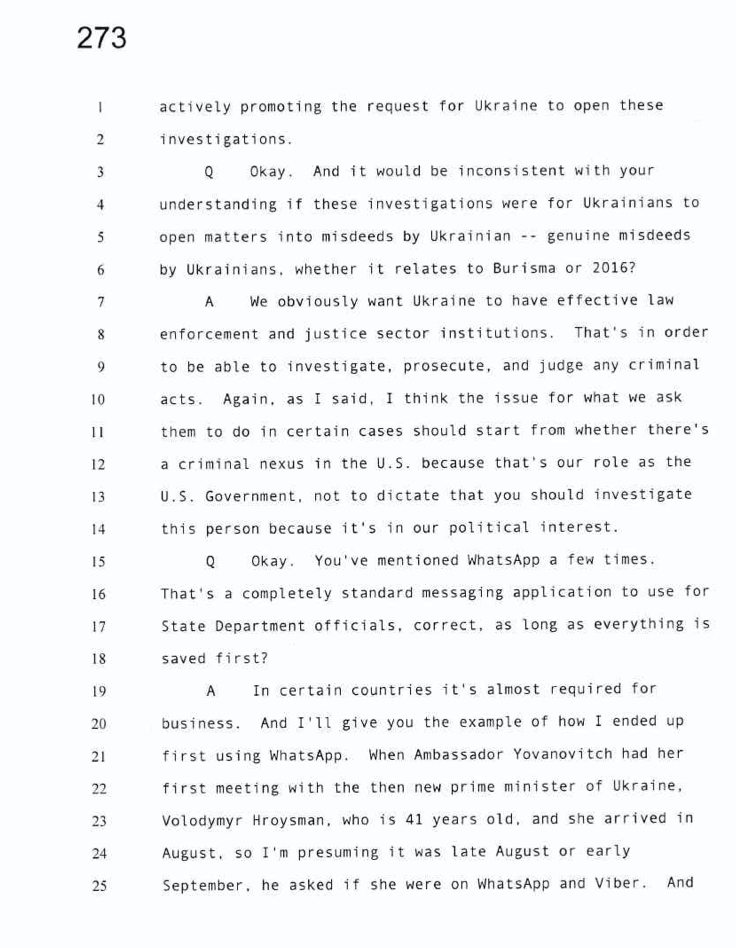 “Okay. Moments ago you referenced the name ‘Clinton,’” Castor said. “Could you just go through that again?”

Kent then confirmed that he was told Trump wanted Zelensky to mention Clinton by name. 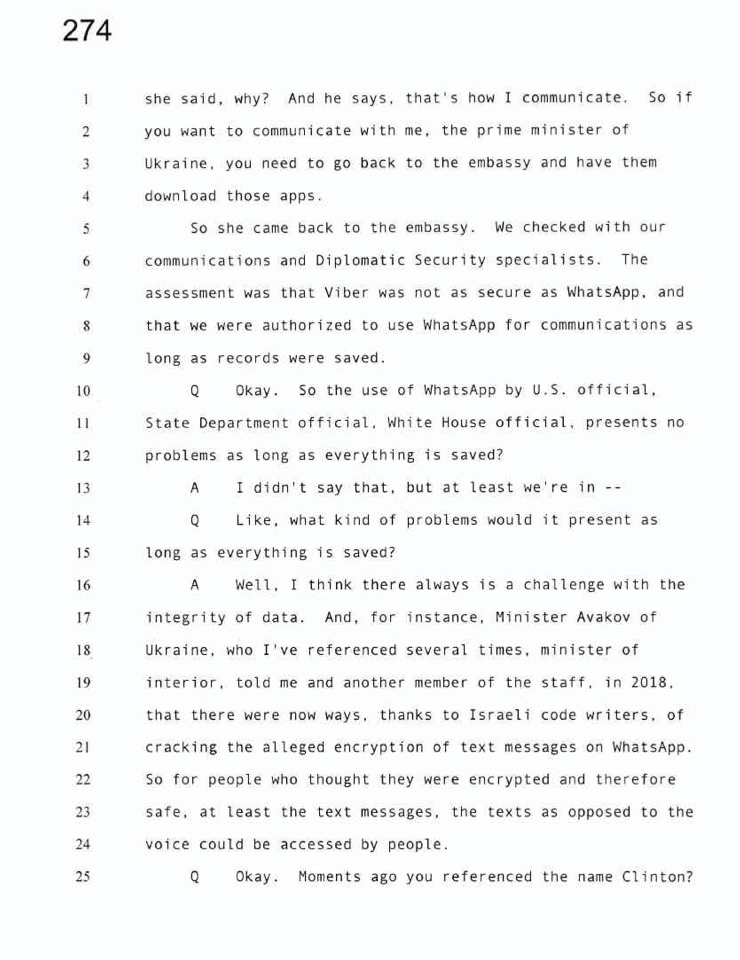 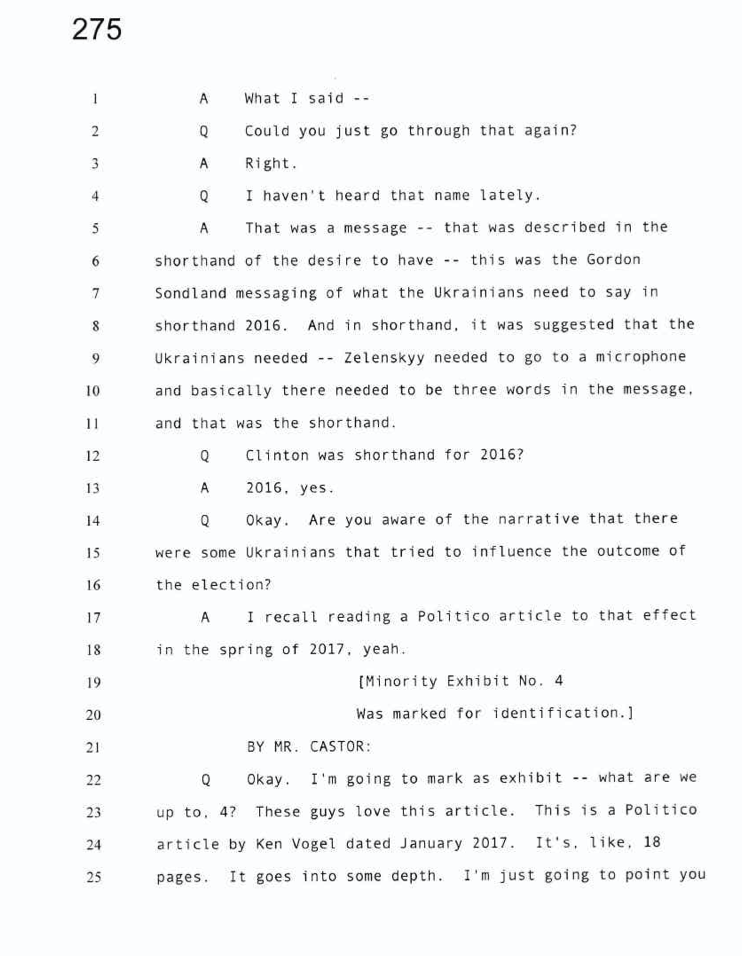 As the Washington Post noted, there was no mention of the Clinton element in top U.S. diplomat to Ukraine Bill Taylor’s testimony:

It’s not clear why we haven’t heard about this before. Taylor, after all, has also testified about the things he heard about Sondland through Morrison, a now-former White House aide who served on the National Security Council. Taylor’s testimony didn’t make such a mention of Clinton in this context.

The release this week of deposition transcripts for U.S. special envoy to Ukraine Kurt Volker and U.S. ambassador to the European Union Gordon Sondland, which included text message communications, showed that Volker had actually sent a top Ukrainian official some scripted language that Trump wanted Zelensky to read when making an announcement. That didn’t mention Clinton by name either.

“Special attention should be paid to the problem of interference in the political processes of the United States, especially with the alleged involvement of some Ukrainian politicians,” Volker wrote regarding what Zelensky was supposed to say. “I want to declare that this is unacceptable. We intend to initiate and complete a transparent and unbiased investigation of all available facts and episodes, including those involving Burisma and the 2016 U.S. elections, which in turn will prevent the recurrence of this problem in the future.”