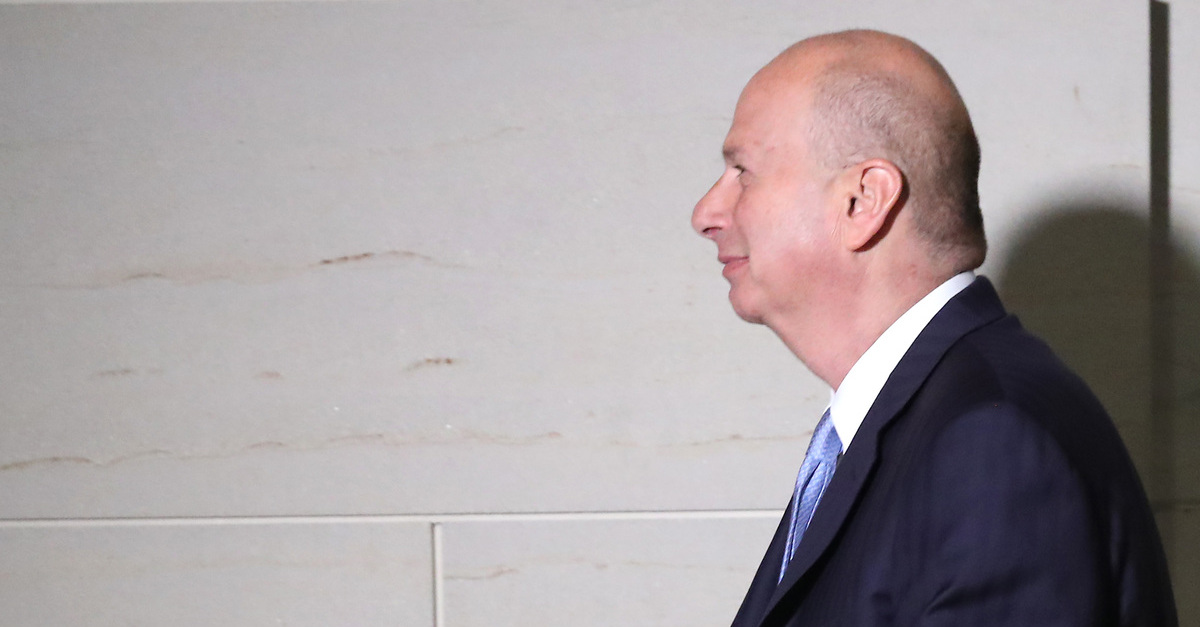 Gordon Sondland, the U.S. Ambassador to the European Union, changed a substantive aspect of his prior testimony before congressional impeachment investigators in the U.S. House of Representatives. Sondland now appears to endorse the idea that President Donald Trump was, in fact, shopping around for a quid pro quo with Ukrainian President Volodymyr Zelensky during the “perfect” and much-disputed July 25 phone call.

According to a Nov. 4 addendum, Sondland said he recently remembered that his marching orders were to precondition congressionally appropriated U.S. military aid on whether or not Ukrainian officials complied with a request by Trump that an announcement be made stating that Ukraine was launching an investigation into Joe Biden‘s son Hunter Biden over his prior work for the natural gas company Burisma Holdings.

Reaction to the blockbuster change was met with shock and awe.

“Sondland is a POLITICAL APPOINTEE, nominated by Trump to be ambassador to the E.U., and then handpicked by [Mike] Pompeo to expand his job beyond the E.U. to cover Ukraine,” noted Eric Columbus, the former special counsel to the General Counsel at the U.S. Department of Homeland Security under Barack Obama. “There’s no way to deep-state or never-Trump this.”

As Law&Crime previously reported, Sondland is not a career diplomat. He did not rise to his current position through the ranks of the U.S. Foreign Service. In fact, Sondland had no previous diplomatic or foreign policy experience before he was appointed to his current post in Brussels.

News outlet OregonLive notes how Sondland was able to secure that position:

Sondland donated $1 million to the inauguration of President Donald Trump, records show, but didn’t use his own name. The donations to Trump’s inauguration were made through four Oregon and Washington companies connected to Sondland.

The shift in Sondland’s testimony, therefore, as Columbus suggests, will likely be difficult for the Trump administration to dismiss.

Other aspects of Sondland’s testimony are similarly damning.

Sondland’s characterization of Giuliani’s Ukrainian activities was revealed in a massive, 379-page transcript of the ambassador’s October 17 testimony released by the U.S. House of Representatives Permanent Select Committee on Intelligence on Tuesday.

Rep. Raja Krishnamoorthi (D-Illinois) grilled Sondland near the tail-end of his hours-long appearance before Intelligence Committee Democrats and Republicans during that controversial session.

“When you said in your statement, on page 8 of your statement, you did not understand until much later that Mr. Giuliani’s agenda might have also included an effort to prompt the Ukrainians to investigate Vice President Biden or his son or to involve Ukrainians directly or indirectly in the President’s 2020 reelection campaign, why did you—why do you think that either of those activities are problematic?” Krishnamoorthi asked.

To which Trump’s hand-picked ambassador replied:

Because I believe I testified that it would be improper to do that.

Krishnamoorthi pressed: “And illegal, right?” Sondland confirmed that interpretation of his prior remarks: “I’m not a lawyer, but I assume so.”

When later questioned by a frustrated Rep. Lee Zeldin (D-N.Y.), Sondland said he thought President Trump’s efforts to dig up dirt on his political opponents by leveraging U.S. relations with the Ukraine was utlimately a question for voters to decide.

“I do think it was improper on the future election,” Sondland added.