Trump on Roger Stone’s Witness Tampering: ‘It’s Not Like the Tampering I See on Television’ 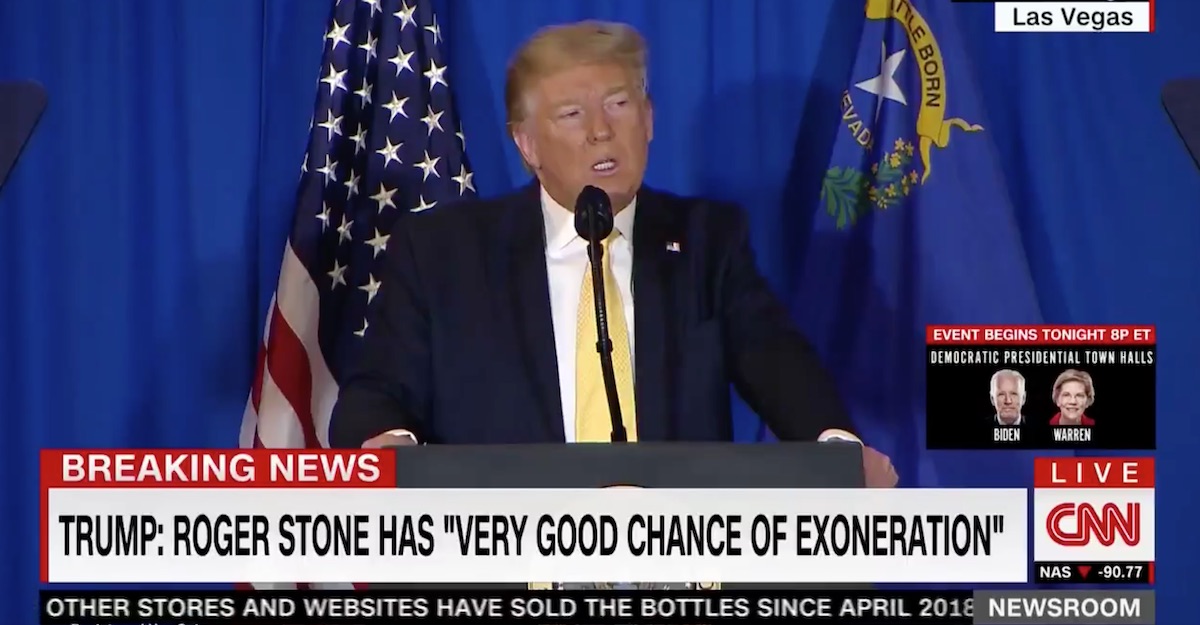 President Donald Trump offered an immediate reaction to the news that his friend and longtime advisor Roger Stone was sentenced to 40 months in prison for obstruction, witness tampering, and lying to federal investigators amid the Russia probe. After the judge in the case said at sentencing that Stone was “prosecuted for covering up for the president”–which was what prosecutors said at trial--Trump said that he still had hope Stone would be exonerated.

One of the reasons he has that hope, Trump suggested, is that Stone’s witness tampering of Randy Credico is “not like” the tampering one sees on TV or in movies.

“I personally think [Stone] was treated very unfairly. They talk about witness tampering, but the man that he was tampering [Credico] didn’t seem to have much of a problem with it,” Trump said, referring to Credico’s letter to the judge. In that letter, Credico asked the judge not to send Stone to prison and said he never “personally felt threatened by Mr. Stone.”

“I never in any way felt that stone himself posed a direct physical threat to me or to my dog. I chalked up his bellicose tirades to ‘Stone being Stone.’ All bark and no bite!” Credico said.

The president went on to say that this didn’t sound anything like the witness tampering portrayed in Hollywood. While prosecutors took the threats very seriously, others have opined that the government went too far when attempting to punish Stone.

Trump suggested that the witness tampering charge was trumped-up.

"It's not like the tampering that I see on Television when you watch a movie. That's called tampering —with guns to people's heads and lots of other things."

Trump on Stone, who was convicted of witness tampering. pic.twitter.com/jy1Q0BBtEu

“It’s not like the tampering that I see on television when you watch a movie. That’s called tampering —with guns to people’s heads and lots of other things,” Trump told an audience of former prisoners at the Hope for Prisoners Graduation Ceremony in Las Vegas, Nevada. “So we’re gonna see what it is, maybe there was tampering and maybe there wasn’t.”

Prosecutors said that, actually, Stone’s corrupt pressuring of Credico was right out of a movie:

In total, between November 2017 and May 2018, Stone sent Credico at least seven written communications urging him to plead the Fifth before the Committee.

Stone also used a movie reference that he knew Credico would understand to try to persuade Credico to falsely tell the Committee that he did not remember the relevant events. On November 27, 2017, the day the Committee issued a subpoena to Credico, Stone wrote to Credico, “This whole thing will be worthless unless you find a place to do your Frank Cannon 10 July imitation: ‘Sure. Sure. Roger Stone this, Roger Stone that.” Seventeen seconds later, Stone wrote “Frank Pantsgele.” The line Stone quoted to Credico was spoken by a character, Frank Pentangeli, in a scene from the movie The Godfather, Part II. In that scene, Pentangeli arrives at a Senate hearing to testify against Michael Corleone. Pentangeli’s testimony is expected to establish that another witness before the Senate committee, Michael Corleone, has perjured himself. After Corleone arrives with Pentangeli’s brother, Pentangeli lies and claims he doesn’t know anything about Corleone’s criminal activity. When Pentangeli is confronted with his prior statements about Corleone, Pentangeli tells the Committee that he lied to the FBI, testifying that when the FBI asked about Corleone’s criminal activity, Pentangeli said, “Sure, sure, Michael Corleone this, Michael Corleone that.” The import of this message from Stone to Credico was unmistakable. As Credico testified at trial, when Stone told Credico to “do a Pentangeli,” Credico understood Stone to mean that Credico should “throw them off,” rebuff,” and “divert” the Committee, by falsely claiming not to recall any of the conversations Credico had with Stone or the events that had transpired.

While Stone was pressuring Credico to plead the Fifth or “do a Pentangeli” before the Committee, Stone was keeping the real intermediary, Jerome Corsi, apprised of his efforts. On November 30, 2017, Stone emailed Corsi. Stone and Corsi discussed Credico’s potential testimony, and Corsi suggested Stone not make further statements about Credico because that could raise “new questions that will fuel new inquiries.” Stone responded, “Credico will take the fifth. But let’s hold a day.”