‘He Was Prosecuted for Covering Up for the President’: Roger Stone Sentenced to 40 Months | Law & Crime

‘He Was Prosecuted for Covering Up for the President’: Roger Stone Sentenced to 40 Months 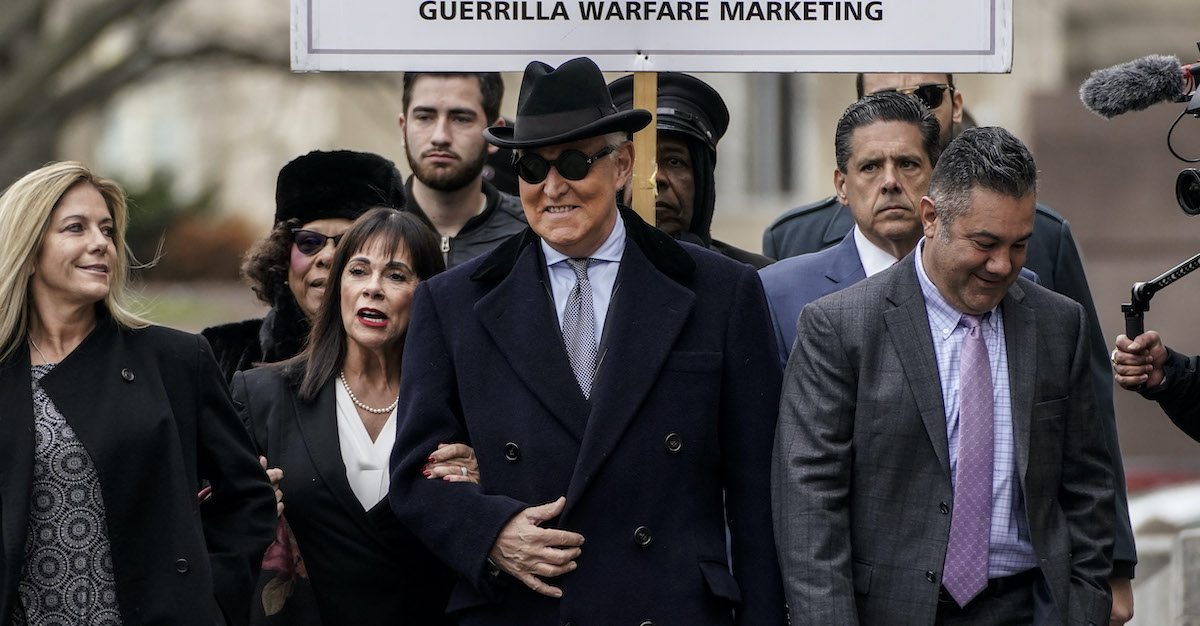 Stone was found guilty of seven federal criminal counts for obstruction of justice, witness tampering and lying to federal investigators during the Russia probe. Prosecutors even said Stone lied to protect President Donald Trump. The trial took a week and a half. What happened after the trial proved to be a lot more controversial.

The mass exodus by prosecutors–some of whom were formerly on Robert Mueller’s team–and Attorney General William Barr’s explanation for overriding their sentencing recommendation (in a case of personal interest to President Trump, no less) sparked widespread outrage among DOJ veterans.

Line prosecutors initially recommended a seven to nine years behind bars for Stone, prompting the president to tweet that this was a “miscarriage of justice.” The DOJ responded by changing that recommendation to three to four years. The prosecutors left the case, and one of them left the DOJ entirely. Barr said after the fact that he still thought the Stone prosecution was a “righteous” one.

In the first sentencing memo, prosecutors made clear that they wanted Stone punished for his threatening of witness Randy Credico and for his post-indictment conduct inside and outside of court. For example:

Pursuant to U.S.S.G. § 2J1.2(b)(1)(B), eight levels are added because the offense “involved causing or threatening to cause physical injury to a person, or property damage, in order to obstruct the administration of justice.” As detailed above, as part of Stone’s campaign to keep Credico silent, Stone told Credico in writing, “Prepare to die, cocksucker.” Stone also threatened (again in writing) to “take that dog away from you.” Stone may point to the letter submitted by Credico and argue that he did not have a serious plan to harm Credico or that Credico did not seriously believe that Stone would follow through on his threats. But Credico testified that Stone’s threats concerned him because he was worried that Stone’s words, if repeated in public, might make “other people get ideas.” Tr. 11/8/19, at 795.

In any event, it is the threat itself, not the likelihood of carrying out the threat, that triggers the enhancement.

The offense level added up to 29, resulting in the 7- to 9-year range.

The second sentencing memo downplayed all of this, noting that Credico himself said he didn’t take the threats seriously. the government argued the eight-level enhancement shouldn’t apply, dropping the range to 3-4 years:

First, as noted above, the most serious sentencing enhancement in this case—the eight- level enhancement under Section 2J1.2(b)(1)(B) for “threatening to cause physical injury”—has been disputed by the victim of that threat, Randy Credico, who asserts that he did not perceive a genuine threat from the defendant but rather stated that “I never in any way felt that Stone himself posed a direct physical threat to me or my dog.” (ECF No. 273). While Mr. Credico’s subjective beliefs are not dispositive as to this enhancement, the Court may consider them when assessing the impact of applying the enhancement – particularly given the significant impact that the enhancement has on the defendant’s total Guidelines range.

It’s true that Credico said this.

Much was made of Stone urging Credico to “do a ‘Frank Pentangeli’” and the alleged threat to kidnap Credico’s dog, but Credico wrote a letter to the judge after the trial saying that he didn’t really believe Stone would ever harm him or his dog Bianca. Stone’s defense attorneys didn’t question Credico at trial in a way that would have made that clear, according to Credico:

Credico said that understood Stone broke federal laws, but suggested that it would be cruel to sentence Stone to prison when the judge can sentence him to participate in “an alternative to incarceration program.”

As for Credico’s request for leniency, judge says, “It’s nice that Mr. Credico has forgiven Stone … But all of that says more about Credico than Stone.” Adds that Credico was “nervous” testifying and likely “doesn’t want to be known as the reason behind a tough sentence”

The judge couldn’t help but notice conflicting positions on the Credico threat at sentencing.

This is a key point. And one the government has taken conflicting positions on – expect govt to soft pedal today. Victim has said he didn’t take alleged threat seriously. https://t.co/xcXyHkP2gk

But the DOJ still managed to cloud the issue in a major way, essentially reversing course on the position taken in the revised memo. Prosecutors remarkably said the 8-level enhancement should apply.

So DOJ reversed its reversal? What the hell is going on? https://t.co/qrAxTIRA3q

This whole sequence is mindblowing. Four prosecutors quit the Stone case because DOJ didn't back their sentencing recommendation.

The newly installed prosecutors … are now arguing in favor of the original recommendation.

ABJ: With respect to the second filing — you signed it. Did you write it?

Crabb: I’m not at liberty to discuss the internal deliberations in DOJ.

ABJ: Were you directed to write it by someone else?

The replacement prosectors even said that the confusion was not the fault of the team that resigned.

Crabb said he stands by the original sentencing memo, adding, “it was done in good faith.”

The judge agreed the seven to nine years is too long a sentence while also saying the initial recommendation was legally correct and above reproach.

Judge Amy Berman Jackson just said a sentence of seven to nine years for Roger Stone would be too long.

President Trump live-tweeted the Stone sentencing, asking: What about James Comey, what about Hillary Clinton, what about Andrew McCabe?

“They say Roger Stone lied to Congress.” @CNN OH, I see, but so did Comey (and he also leaked classified information, for which almost everyone, other than Crooked Hillary Clinton, goes to jail for a long time), and so did Andy McCabe, who also lied to the FBI! FAIRNESS?

This sparked critics to, once again, tell Barr to resign in order to prove his sincerity.

Trump is tweeting while Stone’s sentencing is in progress. If Barr doesn’t resign after this, he has no credibility with anyone – DOJ, courts, the public. Hard to see how he can remain in place IF he cares about DOJ & the rule of law more than power & politics. https://t.co/pGCMDH6Ai4

The judge made a point to say that this was a mess of Roger Stone’s own making, not a prosecution by his political enemies.

Judge begins by defending case against Stone. "He has not been prosecuted by his adversaries or … pursued by his political enemies," she said; it was Stone who "characteristically injected himself smack into the center of one of the most significant issues of the day."

The judge also had some parting shots for the president.

ABJ calls Trump’s comments on the case “entirely inappropriate,” she will not be influenced by them. But she will not hold them against Stone either.

Also says she will not be influenced by pressure from the left from those who want a stiffer sentence.