‘She Is, in Fact, A Victim’: Albany Co. Sheriff Says N.Y. Governor Andrew Cuomo ‘Possibly’ Faces ‘A Couple’ of Misdemeanors

Apple made the comments in a Saturday press conference.  But they were buried in a series of assertions and backpedals involving the specifics of where he saw the case legally moving from here.

Apple said he was on the periphery of the matter but suggested that any possible criminal case against the governor would “probably be a misdemeanor” or “possibly a couple” given the findings of a report issued by New York Attorney General Letitia James (D) earlier in the week.  However, when later pressed to describe any possible charging decision against the governor, Apple said it would “not be proper” to opine about possible charges — even though he had so done and continued to do again.  Apple added after his backpedal that James’s report left his department “floating around a misdemeanor” — possibly.  But that was just his gut assessment before the case even took traction.

Apple repeatedly described Cuomo’s accuser as a “victim” — leading to questions from assembled reporters about whether or not Apple was intentionally signaling that Cuomo’s accuser was telling the truth.  When asked pressed to clarify his intentions behind using that particular word, Apple pointed reporters to the Attorney General’s report and said that “at this point, I’m very comfortable and safe saying that she is, in fact, a victim.” 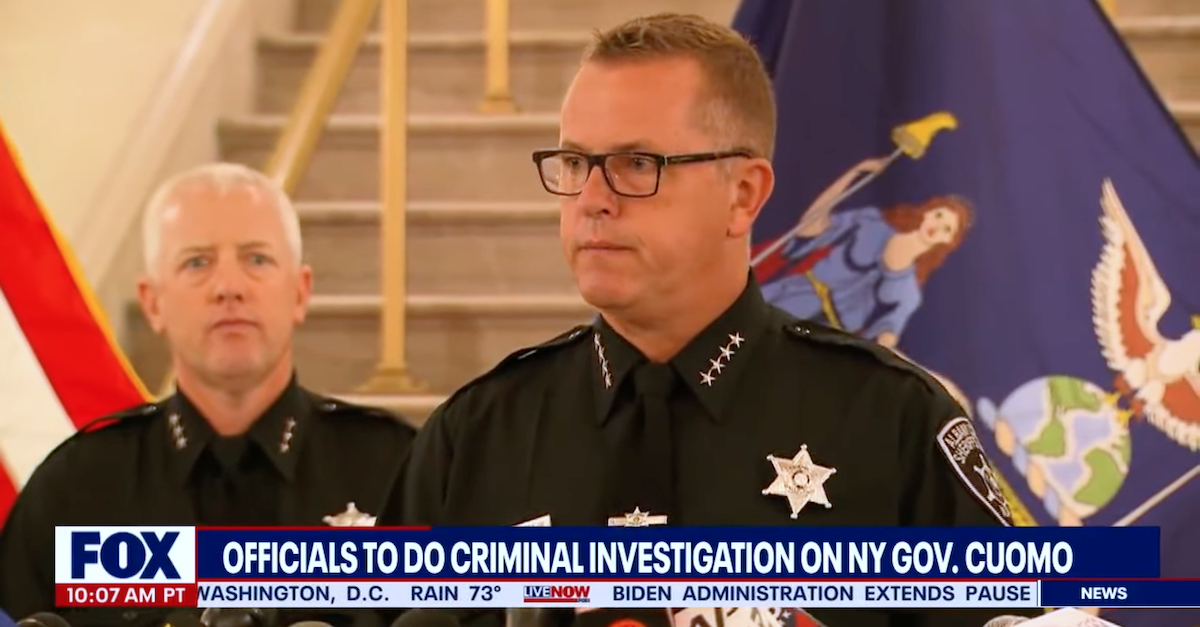 According to James’s report, Cuomo “sexually harassed multiple women and in doing so, violated federal and state law.”  The report also said the attorney general’s office uncovered a “deeply disturbing picture” of a “toxic workplace” which became the locus of multiple incidents of misconduct.

Cuomo’s team responded on Friday by saying James’s report contained “no open-minded fact-finding.”  His surrogates also accused the A.G.’s investigation of being “conducted in a manner to support a predetermined narrative.”  They further said the report “ambushed” the Governor.

On Saturday, Apple outlined how his office became connected with the explosive accusations.  The sheriff said his 911 center “received a call from a local attorney” hired by one anonymous accuser on Wednesday at 8:30 p.m. That attorney, Brian Premo of Albany, said he had a “female client who wished to come forward and file an allegation of criminal conduct against the governor,” Apple indicated.

Apple said his 911 center asked him to handle the matter personally. On Thursday morning, Apple said said Premo was given the name and phone number of a special victims investigator who would handle the case from there.

“Those two were in contact, and I have since been removed” from the matter, the sheriff said.

“I cannot get into the nature of — um — or specific allegations at this time,” Apple cautioned early on in the news conference. He added that the investigation was in its early stages and that “fact finding and interviews” were ongoing. Apple said it would be “totally premature” for him to comment on what his office was or was not uncovering from a factual perspective and added that he would refuse to publicly release police documents about the case “as per an agreement” with Albany County District Attorney David Soares (D).

Though Apple didn’t go into detail, under New York law, N.Y. Pub. Off. Law § 87(2)(e)(i) to be precise, government records which “are compiled for law enforcement purposes” need not be disclosed to the public under the state’s Freedom of Information Law (FOIL) if their release might “interfere with law enforcement investigations or judicial proceedings.”  The parameters of the relevant statute have been hotly litigated, but generally, the courts are willing to allow the police in New York State to refuse to release records until court proceedings in a case are complete — and, even then, the courts have allowed the police to keep records secret when witnesses have been promised confidentiality or anonymity.

“I can tell you that Attorney Brian Premo and his client did in fact come in to file a formal report alleging criminal conduct against the governor,” Apple continued on Saturday. He confirmed that the alleged “conduct was sexual in nature.”

The sheriff said the meeting “commence[d] the investigative process” from his office’s standpoint. He said the conference “was approximately one hour long” and was focused mostly on procedural matters involving the criminal justice system — in essence, it informed the accuser as to how the process would play out going forward.

Apple added that his office had reached out to the Attorney General’s office for material connected to the case. James’s office immediately issued a statement indicating it would cooperate with the sheriff’s department’s investigation.

We will cooperate fully with the Albany sheriff and turn over all evidence related to this complainant.

Similarly, we will cooperate with all law enforcement agencies, as appropriate.

“I am the sheriff of this county, and I have jurisdiction,” he noted.

He responded to many questions by saying that the investigation was in its “infant stages” and that it would “not be in our best interest” to discuss any of the preliminary details.

Apple said he was not able to say — suggesting that he did not know — why the accuser chose to file a criminal accusation months after initial complaints about the governor’s alleged conduct became public.

“I would be guessing,” Apple said when asked how long the matter might take to reach a conclusion from his perspective. “This is obviously a very high-profile investigation. There is a lot of information out there. We have a lot of fact finding to do. We have a lot of interviews to do. And — you know what — I’m not going to rush it because of who he is, and I’m not going to delay it because of who he is. We’re going to conduct a very comprehensive investigation, as my investigators and my staff always do. And when the data and the facts are complied, we’ll make a decision.”

“We treat victims the same, we investigate the same; this one just has more eyes on it,” he added.

Apple commended the accuser for her “bravery” in coming forward while swatting down incessant questions for more details from the gathered press corps.

The sheriff did note that the attorney general’s investigation appeared to be geared toward civil matters. He noted that his investigation involved a criminal case.

When asked for more information about the process, Apple indicated that additional district attorneys’ offices were involved beyond Albany County. He said that the accuser would almost certainly be called in for a more extended interview and that the Albany County D.A. would ultimately decide whether to file criminal charges against the governor.

Apple, a Democrat, was asked to respond to claims that the investigations into Cuomo, another Democrat, were politically motivated. Apple said that his office had a “proven record” in New York’s Capital District of helping victims and that he was simply doing his job.

Albany County, N.Y., has been a Democratic Party stronghold for decades. The county overwhelmingly voted for Joe Biden in 2020 — Biden won the county with 60% of the vote compared to Donald Trump’s 38% — and also overwhelmingly voted for Hillary Clinton and Barack Obama in previous elections.  Many Democrats have called for him to resign or be impeached as accusations have stacked up against him from more than half a dozen accusers.

He said he planned to meet with D.A. Soares within the next few days — possibly even Sunday or Monday.

Cuomo, obviously, has not been charged with a crime.  He has steadfastly maintained since March that he “did not do what has been alleged — period.”