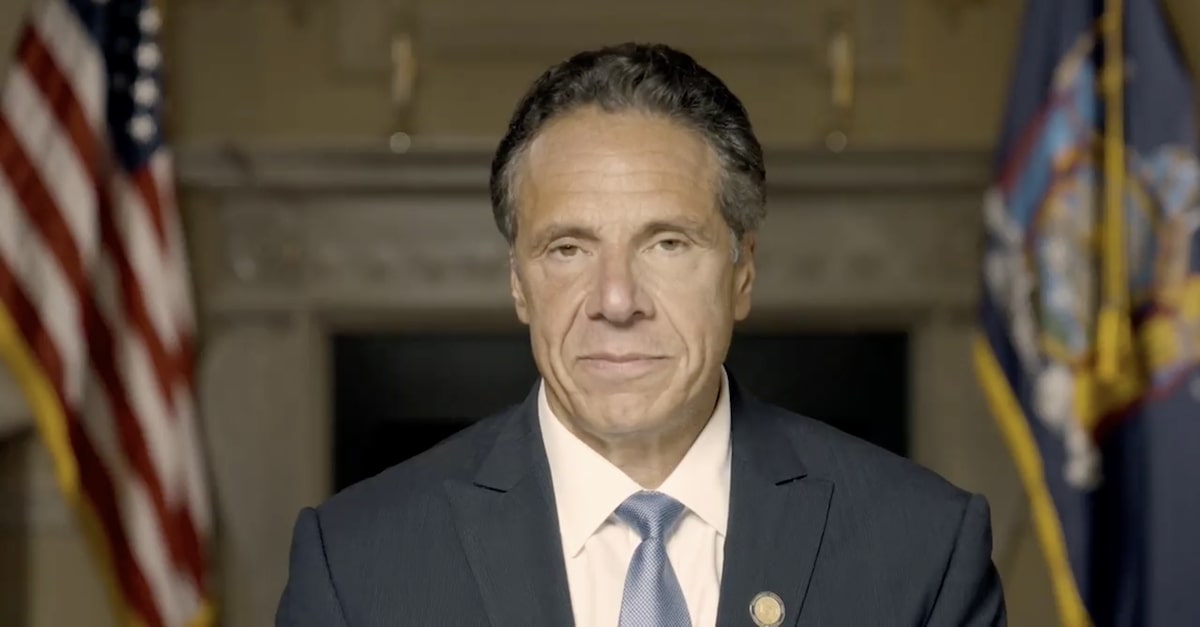 “There has been no open-minded fact-finding here,” Cuomo’s lawyer Rita Glavin claimed on Tuesday. “This investigation was conducted in a manner to support a predetermined narrative.”

Glavin’s co-counsel Paul Fishman claimed that their press conference took time because the attorney general would not provide their legal team with information they needed to respond. Glavin later called the report an “ambush.”

“After multiple women made accusations that Governor Cuomo sexually harassed them, the governor, himself, requested that Attorney General James oversee an independent investigation,” Levy wrote in a statement. “The independent investigators selected are widely respected professionals, recognized for their legal and investigatory ability. To attack this investigation and attempt to undermine and politicize this process takes away from the bravery displayed by these women.”

“She Has Accused Gov. Cuomo of Sexual Assault”

Neither Glavin nor Fishman mentioned the criminal complaint in their preliminary remarks, but Glavin did note that one of the governor’s accusers allege criminal conduct.

“In essence, she has accused Gov. Cuomo of sexual assault,” Glavin said.

Multiple news outlets identified the woman who filed the complaint against Cuomo as the same complainant identified in the recent attorney general’s report as “Executive Assistant #1.” The woman alleges that Cuomo groped her inside the Executive Mansion in November 2020.

Glavin claimed the allegation took Cuomo aback, when it surfaced earlier this year.

“When she first raised this in early March, he was stunned,” she said.

The report features allegations by 11 women identified as complainants, with the “most egregious allegations of physical touching“ coming from the assistant.

Cuomo denied the groping allegations in a pre-recorded statement on Tuesday.

“Let me be clear, that never happened,” Cuomo insisted at a press conference on Tuesday.

In a previous prepared statement, Cuomo attorneys called the woman “Ms. X” and described her as one of several administrative assistants who worked in the governor’s office. They say she started working for him during the time of the COVID-19 pandemic.

“Ms. X” first granted an anonymous interview to the Times Union, which published her story this year on April 7th.

“I encourage you please read what she told the Times Union about that day,” Glavin said, claiming that her comments were inconsistent with the newspaper’s report. 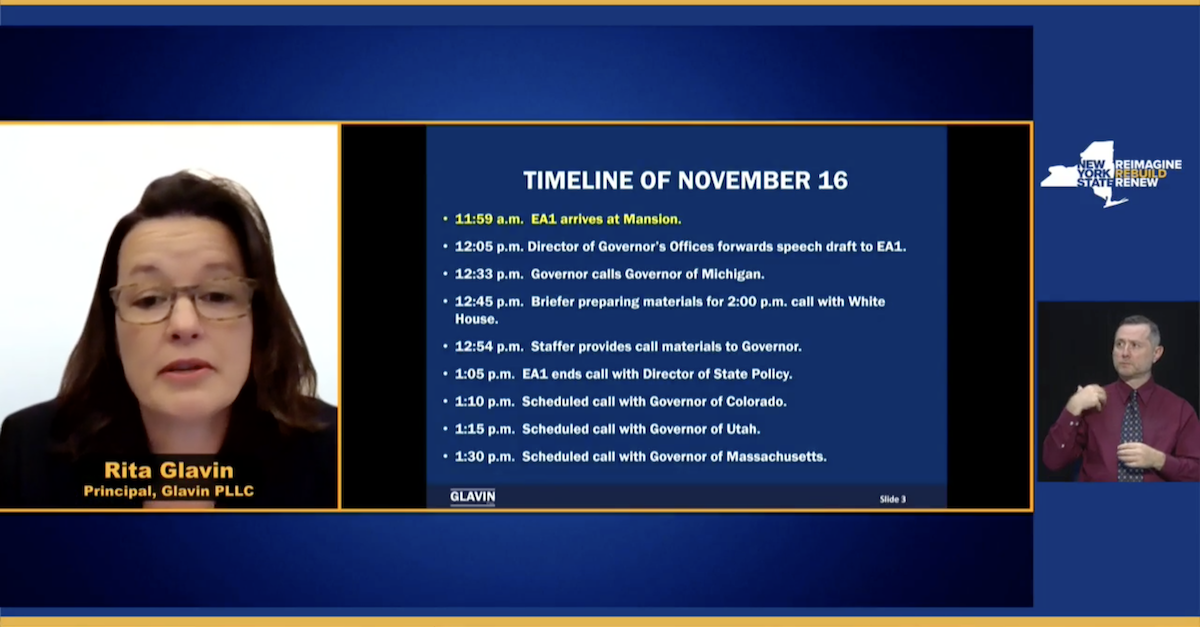 The lawyer claimed that the attorney general’s office ignored documentary evidence that discredited the woman’s account.

“Me and my team went through the emails for that day, all the entrance and exit records, and this woman’s story—which is stated as fact in the report—is false,” she said, providing a timeline of the events on that day.

The Times Union quotes the woman as saying “You’re going to get us in trouble” and alleging that Cuomo slammed the door before saying “I don’t care.” Cuomo is accused of touching the woman’s breast after that.

Both the attorney general’s report and the governor’s attorneys quoted those lines, and Glavin argued that the 10 other staffers around that day would have noticed a door that slamming in the Mansion.

“You ask anybody who works in the Mansion—because of the age of the mansion—a door being slammed shut echoes,” Glavin said. “The report doesn’t say that anyone corroborated hearing a door slam.”

They claim that emails and messages show her in good spirits that day, telling another staffer she was feeling “pretty good right now actually,” after having been provided with cheese and crackers at work.

In the attorney general’s report, 11 women stepped forward with complaints against Cuomo. The governor has denied all of the allegations, but the lawyers focused mainly on two: those of the executive assistant and former special advisor Lindsey Boylan, whom Cuomo’s lawyers attacked as politically motivated.

A lawyer for another accuser, Charlotte Bennett, panned the performance by the governor’s lawyers.

“In this afternoon’s press conference, the Governor’s attorneys did the only thing they could do in response to the Attorney General’s scathing indictment of their client’s illegal behavior: they attacked the integrity of the Attorney General’s report and even impugned the investigators—two highly respected attorneys who are preeminent in their fields—themselves,” attorney Debra Katz wrote.

Katz touted the scale of the investigation, consisting of more than 1,100 citations to documents, audio recordings, interview transcripts, and other evidence, evidence that the lawyer said “speaks for itself.”

“There will be a rolling production of interview transcripts made available to the state Assembly, which will be redacted as needed,” said Levy, alluding to the rapidly-gathering steam toward Cuomo’s anticipated impeachment proceedings.

Focusing their arguments on a small number of accusers in their remarks on Friday, Cuomo’s lawyers were silent in their statement about allegations by a New York State Trooper, who told investigators that the governor “sexually harassed her on a number of occasions.” The trooper told the attorney general’s office that Cuomo ran his hand across her stomach, from her belly button to her right hip, while she held a door open for him at an event.

Pressed about those allegations during the question-and-answer session, Glavin said the governor would respond to this directly. She added that, to her knowledge, the Trooper is still assigned to protect the governor.

“What I can tell you is, up until a day or two before the report, the trooper was working, and I would also add that the governor has a view of this particular Trooper,” Glavin said, calling that view “positive.”

Asked about how to protect complainants from retaliation, Glavin responded: “The whole world is watching right now.”

“People are not going to be retaliated against by Gov. Cuomo,” she asserted.

Update—Aug. 6 at 6:31 p.m. Eastern Time: This story has been updated to included responses from the attorney general’s office and an accuser’s attorney.