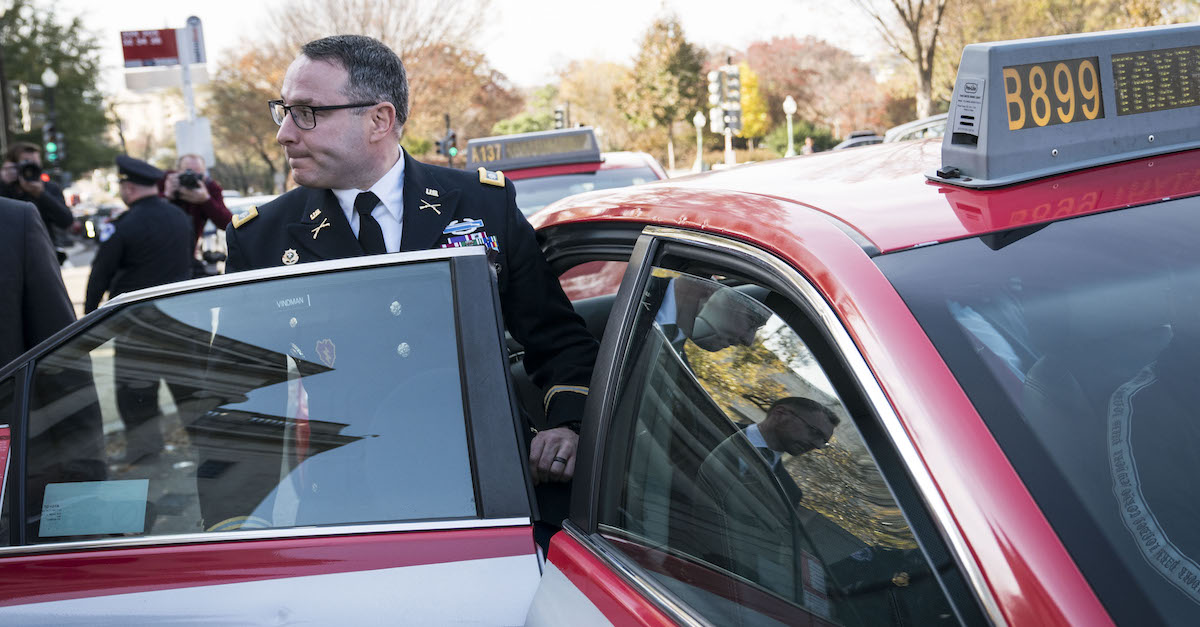 Purple Heart recipient Lt. Col. Alexander Vindman’s days at the White House are over just two days after President Donald Trump was acquitted at the impeachment trial in the Senate, during which Trump’s lawyers noted Vindman was a witness against the president.

BREAKING: Alex Vindman was escorted out of the White House by security this afternoon. Dismissed from NSC.

Vindman started working on the National Security Council (NSC) in July 2018 and was supposed to stay there for two years. That stint has ended a few months early.

Vindman’s lawyer said his client was clearly ousted for “telling the truth” about the president’s July 25 phone call with Volodymyr Zelensky.

Here’s the full statement from Lt. Col. Vindman’s attorney saying he was escorted out of the White House today pic.twitter.com/s9vzZJ7wof

“Vindman was asked to leave for telling the truth. His honor, his commitment to right, frightened the powerful. During his decades of service to this country, LTC Alexander Vindman has served quietly but dutifully, and he has served with honor,” David Pressman said.

Vindman was escorted out of the White House by his NSC lawyer twin brother Yevgeny, who was also let go. Technically, Vindman wasn’t fired given that he is still active military and is going to be reassigned, but he was nonetheless removed from his NSC post months ahead of schedule.

'His twin brother Yevgeny Vindman, a National Security Council attorney, was also fired and walked off the White House grounds alongside him' https://t.co/k0LJdzbKom
(from @kaitlancollins)

What they will be doing next:

What’s next for the Vindman brothers? Alex is going back to the Pentagon and Yevgeny will be at the U.S. Army general counsel’s office, per a lawyer.

Trump is just straight up retaliating now against those who testified before a lawful congressional investigation about potential presidential misconduct.

It would be nice if Mitt Romney wasn’t the only Republican with a spine.

From Gallagher to Vindman and everyone in between, the messages this Administration is sending to the men and women in uniform about duty, loyalty, and the rule of law is pretty clear—and pretty terrifying.

This is reprehensible. There was no need to humiliate Vindman this way, nor was it appropriate to retaliate against him for testifying before Congress. Where is @ChuckGrassley, who in 2018 released a video assuring feds they wouldn't face retaliation for testifying to congress? https://t.co/DvyhYwoyF8

Conservative media figures, lawyers, and lawmakers said that Vindman “deserved to be fired.”

Vindman doesn't just deserve to be fired. He deserves to be court-martialed for insubordination and leaking for the sole purpose of overthrowing the Commander-in-Chief. https://t.co/lv3T0fx5UF

Vindman brothers get the perp walk they deserve. https://t.co/IJglpUeNzf

They said the same was true of Vindman’s brother.

Alexander Vindman is no longer on the National Security Council!

A reminder that yesterday, while talking about Vindman, Trump for some reason also mentioned his brother, Eugene, who was not an impeachment witness. pic.twitter.com/JNRZLGxi8G

They got their wish.

We shall see what justification or pretext the White House offers. “Downsizing” NSC staff generally was what was floated in the media before this ouster officially occurred.

Lt. Col. #Vindman has been removed from NSC post six months earlier than from when his assignment would have expired. Whether this is unlawful retaliation, we shall see. "Escorting" him off WH grounds was definitely tacky at a minimum.https://t.co/BT6jCopg73

Steve Castor, the lawyer who did the questioning for House Republicans during the impeachment inquiry, was criticized for questioning Vindman’s loyalty back in Nov. 2019.

Following that line of questioning, Rep. Jim Himes (D-CT) said it was “designed exclusively to give the right-wing media the opportunity to question your loyalties.”

In response to questioning by Himes, a uniformed Vindman explained how he came to be a Purple Heart recipient.

“In 2014, in the ramp up to probably the largest urban operation in decades, outside of Fallujah, we were conducting a reconnaissance patrol in conjunction with the Marines, and my vehicle was struck by an improvised explosive device that penetrated the armor,” he said.

“Were you injured?” Himes asked.

“I was,” Vindman answered.

Consider the moral depravity of a President who allows his son to launch a vicious attack on a decorated American military officer. https://t.co/p2NXm1z72f

Vindman, when asked during the hearing if he has was a “Never Trumper,” responded that he was “never partisan.”