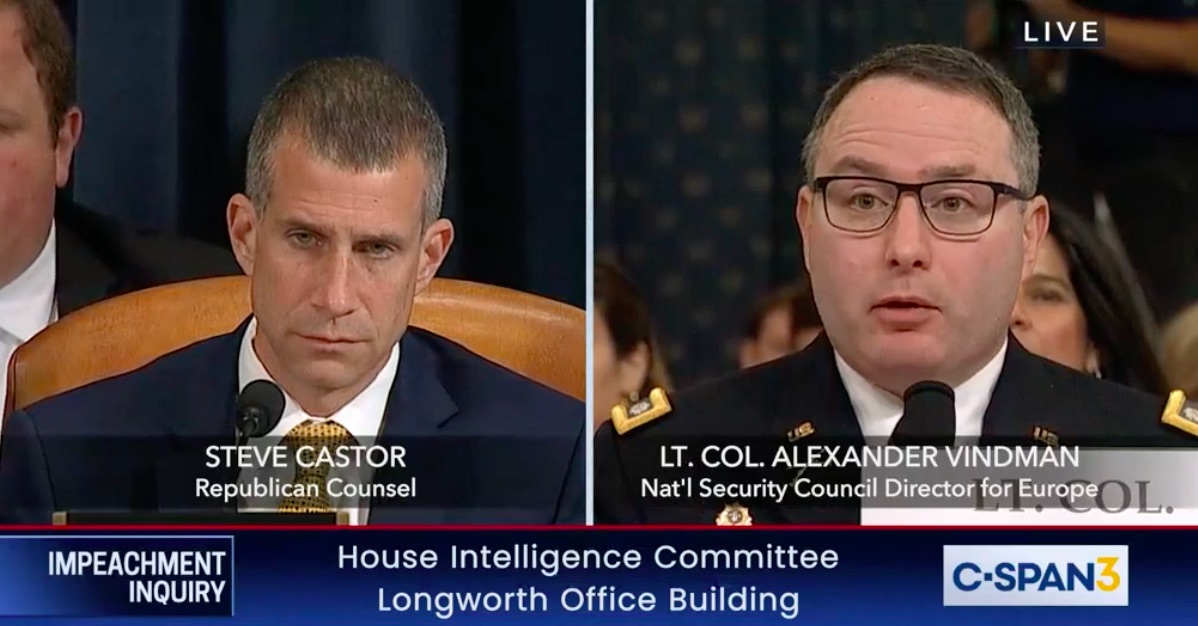 Steve Castor, the lawyer doing the questioning for House Republicans during the impeachment inquiry into President Donald Trump, was derided by attorneys and national security officials after questioning the loyalty of Lt. Col. Alexander Vindman during his public testimony. In the closing minutes of his allotted time, Castor spent a considerable amount of time asking Vindman about being offered the post of defense minister by Ukrainian officials.

Despite Vindman saying he “immediately dismissed” the offers, saying “the whole notion was rather comical,” Castor treated the issue with the utmost gravity, pressing him about the “illustrious position” for more than five minutes, even asking whether the offers were made in English or Ukrainian.

“Every single time, I dismissed it,” Vindman said. “I’m an American. I came here when I was a toddler. And I immediately dismissed these offers, did not entertain them.”

Vindman also clarified that two other Embassy staff officers were present when the offer was made and he immediately reported the offer to his superior officers, as is the protocol when a foreign government makes such an overture.

Oleksandr Danylyuk, the former Chairman of the National Security and Defence Council in Ukraine who made the minister of defense offer to Vindman, told the Daily Beast that both men understood the offer to be a joke.

“We both smiled and laughed,” Danylyuk said. “It was clearly a joke.” Danylyuk also told the Daily Beast that he would not have been able to seriously offer the position to Vindman without direct sign off from Ukrainian President Volodymyr Zelensky.

Attorneys and national security experts immediately condemned Castor’s line of questioning, saying it was clearly designed to disparage the Purple Heart recipient’s patriotism and to insinuate that he maintained some sort of dual-loyalty between the U.S. and Ukraine.

“What a moment. The HPSCI Republican counsel questioning the loyalty of the uniformed military officer and combat veteran testifying before the committee because he is an immigrant,” Hennessey remarked. “This is an extremely gross, not to mention ineffective, line of insinuations from Castor about whether or not Vindman is a sufficiently loyal American.”

Many others — attorneys, law professors and foreign policy experts among them — found Castor’s inquiry equally untoward.

The smearing of Vindman as a leaker, outside his chain of command, insubordinate, a man of dual loyalties — is absolutely, completely despicable, made worse by the fact that it is totally unnecessary.

The shame bell is ringing for many today.

Any attacks on this lifelong patriot who still bears shrapnel from his dedication to this country is despicable. https://t.co/a7Fjj4L9A1

When Trumpers suggest Purple Heart Lt. Col. Vindman, a Jew whose family fled Soviet Ukraine when he was FOUR years old, has dual loyalty, they show:

1. They have zero loyalty to the American dream.

2. Their own dual loyalty is to party-over-country and to white nationalism.

GOP line of questioning with LTC Vindman is insulting and will absolutely backfire on them. https://t.co/Vm0y2eXrSg

Castor shamelessly trying to suggest that Vindman has dual loyalties.

Following the exchange, Rep. Jim Himes (D-CT) specifically called Castor out for his line of questioning, which he said was “designed exclusively to give the right-wing media the opportunity to question your loyalties” (that happened weeks ago).

In response to questioning by Himes, a uniformed Vindman explained how he came to be a Purple Heart recipient.

“In 2014, in the ramp up to probably the largest urban operation in decades, outside of Fallujah, we were conducting a reconnaissance patrol in conjunction with the Marines, and my vehicle was struck by an improvised explosive device that penetrated the armor,” he said.

“Were you injured?” Himes asked.

“I was,” Vindman answered.

Consider the moral depravity of a President who allows his son to launch a vicious attack on a decorated American military officer. https://t.co/p2NXm1z72f

Vindman, when asked during the hearing if he has was a “Never Trumper,” responded that he was “never partisan.”