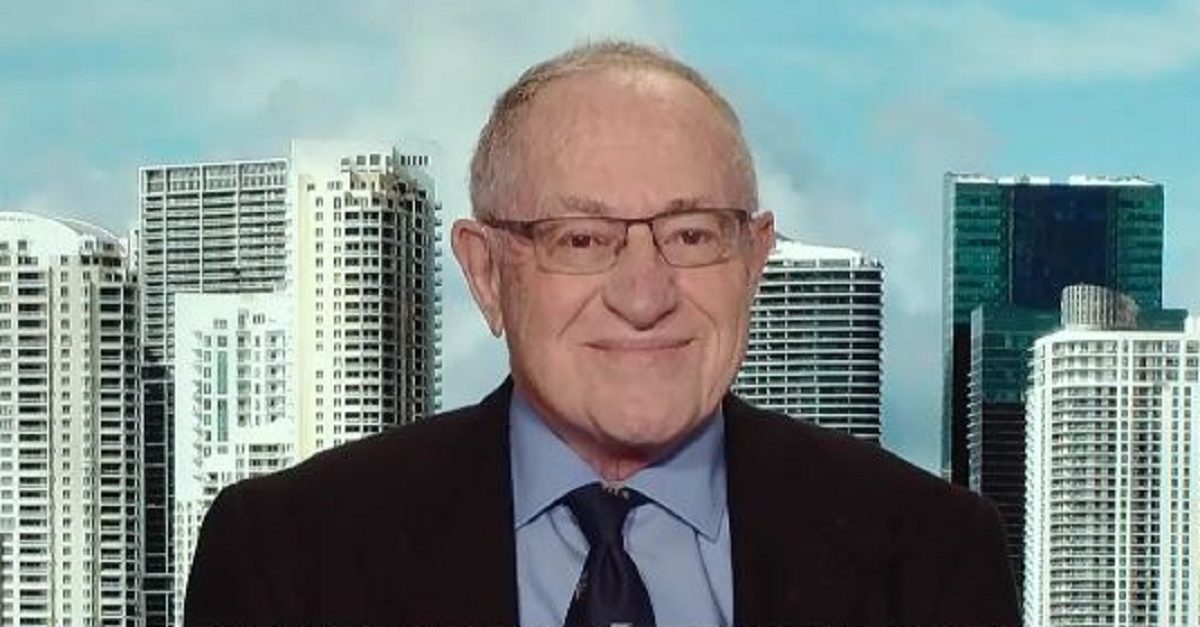 In the wake of Special Counsel Robert Mueller’s public statement that he was not confident President Donald Trump did not commit a crime, calls for impeachment have grown increasingly louder. When asked by a reporter whether he thought Congress would move to impeach him, President Trump answered, “I don’t see how. They can because they’re possibly allowed, although I can’t imagine the courts allowing it.”

Trump’s contention that the courts would bar Congress from impeaching him garnered a great deal of backlash in the press and amongst legal scholars, many of whom pointed out that the courts do not play a role in the impeachment process. Harvard law professor emeritus and frequent Trump defender Alan Dershowitz, however, penned an op-ed for The Hill on Friday arguing that the Supreme Court could, indeed, overrule the impeachment. He asserted that Chief Justice John Roberts could potentially decide whether the House’s articles of impeachment warranted a trial in the Senate:

Dershowitz, using a very narrow interpretation of the phrase “high crimes and misdemeanors,” went on to proclaim that without proof of an actual crime, the court could invalidate the impeachment:

Were Congress to try to impeach and remove a president without alleging and proving any such crime, and were the president to refuse to leave office on the ground that Congress had acted unconstitutionally, there would indeed be such a constitutional crisis. And Supreme Court precedent going back to Marbury v. Madison empowers the justices to resolve conflicts between the executive and legislative branches by applying the Constitution as the supreme law of the land.

Legal experts criticized Dershowitz’s op-ed, many of them warning that his argument was fatally flawed. Another Ivy League professor went so far as to call the op-ed “reckless” and the kind of thing that could “provoke a constitutional crisis.”

Steve Vladeck, a professor at the University of Texas School of Law, pointed out that Dershowitz’s claim had already been considered and discarded by the Supreme Court in 1993’s (Walter) Nixon v. United States, where “Chief Justice [William] Rehnquist expressly held that impeachments present non-justiciable ‘political questions,’ entirely to avoid the possibility of exactly what [Dershowitz] is proposing.”

Non-justiciable means not for the judiciary to decide (i.e. impeachment is a political question).

Vladeck went on to point out that Dershowitz’s “entire argument is based upon two opinions concurring in the judgment in the Nixon case—by Justices [Byron] White and [David] Souter.”

“The problem is that their reasoning is the exact position that the six-Justice majority opinion rejected,” Vladeck said.

CNN analyst, attorney, impeachment expert and Tulane Law School professor Ross Garber further explained that Dershowitz’s reliance on concurrent opinions from the Nixon case would fail, even though the justices “allowed for some extraordinary scenario that might justify judicial review of a removal by the Senate.”

At both The Volokh Conspiracy and Lawfare, Princeton Professor Keith Whittington wrote that Dershowitz was “offering truly reckless advice to the president that he should refuse to leave office if he is impeached by the House and convicted by the Senate on the hopes that the Court might bail him out.” Such advice is “dangerous nonsense and really would provoke a constitutional crisis,” Whittington added.

Laurence Tribe, a renowned constitutional law professor at Harvard who recently authored the book To End a Presidency: The Power of Impeachment, previously told Time that Trump’s suggestion about judicial intervention was “idiocy,” adding that the Supreme Court is “very good at slapping down attempts to drag things out by bringing it into a dispute where it has no jurisdiction.”

Law&Crime reached out to Dershowitz for a response to the criticism, but we have not yet heard back.

UPDATE, June 7: Alan Dershowitz has responded to his critics.

Over the last few years, I’ve challenged my friend and colleague Larry Tribe to a debate me on impeachment, which he has not accepted. I would like to renew that invitation. But for now, let me respond to the most glaring errors.

First, I never said that the President should refuse to leave office. Nor am I giving the President any such advice. I only stated it as a hypothetical – a common teaching tool in legal education. I wrote that if the President were impeached on unconstitutional grounds, it is certainly possible— as two Justices have implied —that the Supreme Court review could occur.

Yet Keith Whittington is claiming that I was “offering truly reckless advice to the president that he should refuse to leave office if he is impeached by the House and convicted by the Senate on the hopes that the Court might bail him out.” Such advice, he is quoted as saying, is “dangerous nonsense and really would provoke a constitutional crisis.”

Likewise, Larry Tribe tweeted, “The @AlanDersh theory that the Chief Justice (or SCOTUS as a whole) could intervene to stop an impeachment on constitutional grounds is idiotic. Advising Trump he could be rescued that way wd be legal malpractice. Too bad pundit malpractice isn’t a thing.”

I give Whittington a pass. He is not a law professor and may not appreciate the fact that a law professor’s hypothetical is not the same as giving firm legal advice. Yet Tribe surely understands the difference.

Second, Steve Vladeck is quoted as saying that my “entire argument is based upon two opinions concurring in the judgment in the Nixon case – by Justice White and Souter. The problem is that their reasoning is the exact position that the six-Justice majority opinion rejected.” The Nixon case dealt with the impeachment of a federal judge, not with the impeachment of the president. While the Nixon case is instructive, it is not controlling when it comes to the impeachment of the President. The framers deliberately introduced a judicial element into the removal of a president, by ordaining that the Chief Justice must preside at the Senate trial. We simply do not know what the Chief Justice or the other justices would do, if and when asked to review an impeachment based on clearly unconstitutional grounds, such as “maladministration,” a criterion explicitly rejected by the framers. Hence, the importance of using hypotheticals.

Pretending to know the answer is “pundit malpractice” to use Larry Tribe’s phrase. Yet this is exactly what Tribe does when he says “the [Supreme] court is very good at slapping down attempts to drag things out by bringing it into a dispute where it has no jurisdiction.” I vividly recall Tribe advising Al Gore with similar confidence that the Supreme Court review of chads and recounts would not happen. After Bush v. Gore, no one should predict with certainty that the Supreme Court would not review an unconstitutional impeachment. Compare my track record of predictions against Tribe’s when it comes to Trump and see who has been proved right more often.

Third, despite frequent mischaracterizations to the contrary, I am not defending President Trump. As a law professor, I am only interested in what the proper legal analysis is, given our constitutional structure of separation of powers and checks and balances. My legal analysis is divorced from my political preferences. If we lived in an alternative universe — one I would prefer living — in which President Hillary Clinton would now be facing impeachment from a Republican-led House over her private email servers, I would have the exact same views. I suspect that many of my now critics — who claim that my views on impeachment are “idiosyncratic” and “very restrictive” (Keith Whittington, Alan Dershowitz Is Wrong About Impeachments, Lawfareblog, June 3, 2019) — would likely hold the very view that they now criticize.

Editor’s note: this story previously misidentified Prof. Whittington as a law professor. He is a politics professor.