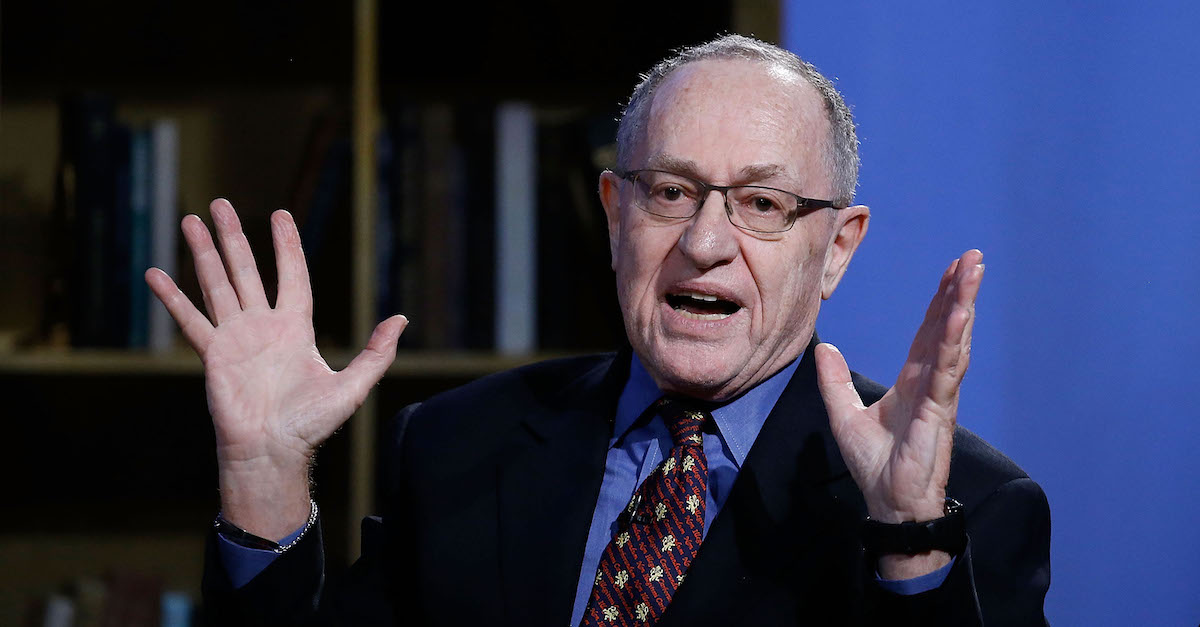 In his first public comments in over two years, Special counsel Robert Mueller only repeated in public what he’d already said in his publicly available report. Nonetheless, his statement was enough to cause a frequent Trump defender in Harvard law professor emeritus Alan Dershowitz to pen a critical response. Dershowitz essentially called Mueller a partisan hack.

First, Dershowitz took issue with Mueller stating that “if we had confidence that the president clearly did not commit a crime we would have said that,” which he claimed was “worse than the statement made by then FBI Director James Comey regarding Hillary Clinton during the 2016 presidential campaign,” where Comey declared she had been “extremely careless” in her handling of classified emails. Comey also said “no reasonable prosecutor” would have charged Clinton.

Dershowitz said that Mueller’s statements went “beyond the conclusion of his report… implying that President Trump might have committed obstruction of justice.” Dershowitz did not point out what Mueller said that wasn’t explicitly stated in his report, which included the passage “while this report does not conclude that the President committed a crime, it also does not exonerate him.”

Dershowitz then claimed that he’s never before referred to Mueller as partisan, though he appears to have walked the line.

“Until today, I have defended Mueller against the accusations that he is a partisan. I did not believe that he personally favored either the Democrats or the Republicans, or had a point of view on whether President Trump should be impeached,” he said. “But I have now changed my mind. By putting his thumb, indeed his elbow, on the scale of justice in favor of impeachment based on obstruction of justice, Mueller has revealed his partisan bias.”

Finally, Dershowitz channeled Comey, writing the words “no responsible prosecutor” to describe what Mueller has done.

Mueller’s comments “distorted the critical role of a prosecutor in our justice system” because “no responsible prosecutor should ever suggest that the subject of his investigation might indeed be guilty even if there was insufficient evidence or other reasons not to indict,” Dershowitz said.

Dershowitz did not clearly identify the particular phrase or manner in which Mueller may have suggested the president was guilty of a crime. Instead, he went on to argue that a person’s guilt or innocence cannot be decided without a public trial, failing to mention that such a mechanism is not available in this case.

“Supporters of Mueller will argue that this is not an ordinary case, that he is not an ordinary prosecutor, and that President Trump is not an ordinary subject of an investigation. They are wrong. The rules should not be any different,” Dershowitz argued. Dershowitz concluded by shaming Mueller and accusing him of “abusing his position of trust and for allowing himself to be used for such partisan advantage.”