‘Elijah McClain Is Not Here, and He Should Be’: Cops, Paramedics Charged in 32-Count Indictment

Two police officers, one former police officer, and two fire department paramedics have been charged with a myriad of crimes as part of a 32-count grand jury indictment connected to the death of Elijah McClain, the Colorado Attorney General announced Wednesday.

All five defendants face one count of manslaughter and one count of criminally negligent homicide, Weiser announced.

Weiser described the grand jury generally as a group of “impartial citizens” who were “serious and diligent” about their duties — but he pointed to grand jury secrecy rules which bar the public from learning too much about precisely what the grand jury discussed. Citing ethics rules, he said releasing too much information would also affect the “confidentiality and integrity” of the case. 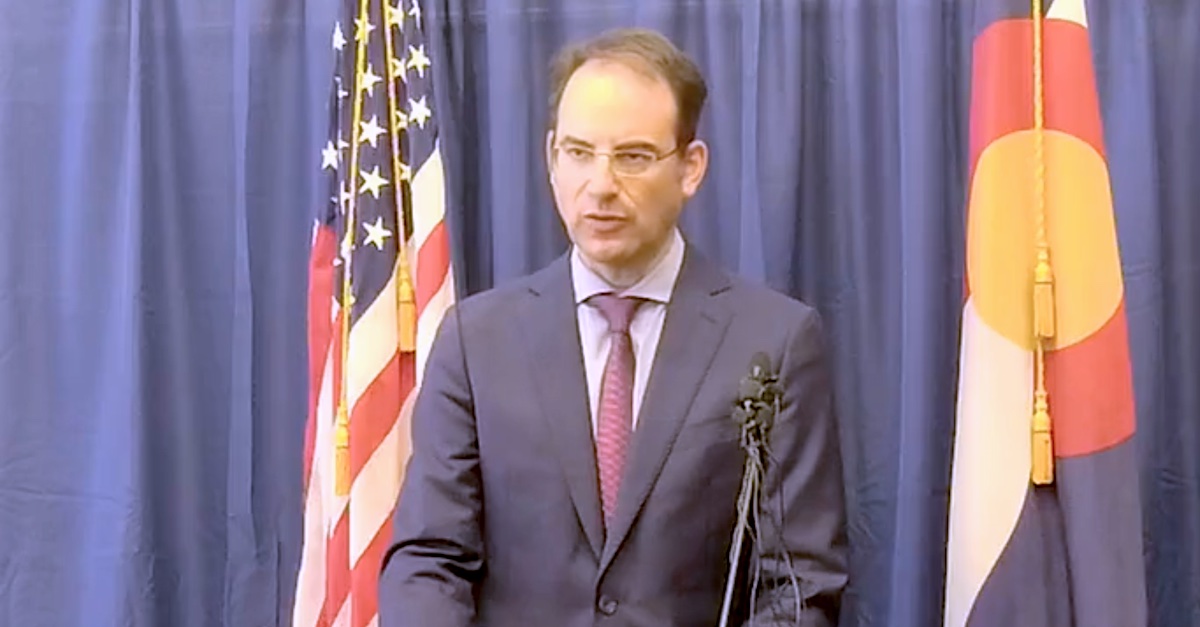 “Make no mistake: we recognize that this case will be difficult to prosecute,” Weiser said. “These types of cases always are. Our goal is to seek justice for Elijah McClain, for his family and friends, and for our state. In so doing, we advance the rule of law and the commitment that everyone is accountable and equal under the law.”

“I want to thank the statewide grand jury for their service,” Weiser continued. He also thanked his staff.

“We’re here today because Elijah McClain is not here, and he should be,” Weiser added.  “He was a son, a nephew, a brother, and a friend. When he died he was only 23 years old. He had his whole life ahead of him. And his family and his friends must now go on and live without him. His death was a loss to all of us. Elijah McClain’s memory will live on as a blessing to all of us.  After his death, Colorado continues to lead on law enforcement accountability.”

Weiser noted that his office’s civil division is embroiled in a “separate” and “ongoing” investigation into whether the City of Aurora’s police and fire departments have a “pattern and practice of violating the civil rights of their community members.”

“That matter is still ongoing,” Weiser said.  “We will announce our findings when that investigation comes to a close.”

The Attorney General’s office began investigating McClain’s death at the request of Gov. Jared Polis (D).  Polis called for the investigation into McClain’s death to be reopened after Dave Young, the district attorney for Adams and Bloomfield Counties, decided that the law enforcement officers were justified in their actions.

“Based on the investigation presented and the applicable Colorado law, there is no reasonable likelihood of success of proving any state crimes beyond a reasonable doubt at trial,” Young wrote on Nov. 22, 2019. “Therefore, no state criminal charges will be filed as a result of this incident.”

Those words led the governor to issue an executive order calling for the AG’s investigation which on Wednesday netted an indictment.

Today I signed an Executive Order designating Attorney General Phil Weiser to investigate and, if the facts support prosecution, criminally prosecute any individuals whose actions caused the death of Elijah McClain.

Weiser said the novel coronavirus pandemic slowed his office’s investigation into the matter.

Rosenblatt was among a group of officers who were either fired or resigned after posing for selfies near a memorial for McClain — one of which mocked the chokehold used on the victim. The Oct. 20, 2019 photos occurred less than two months after McClain’s death.

An independent investigation determined earlier this year that the police had no reasonable suspicion to stop McClain.

McClain was walking home from a convenience store carrying a bottle of iced tea when a caller reported him to 911 as someone who “looks sketchy” and who “might be a good person or a bad person.” McClain was wearing a ski mask; his family said he wore it because he suffered from anemia and was often cold. And he was listening to in-ear headphones as he walked.

Four officers approached him, surrounded him, blocked his path, and told him to “stop tensing up.”

“I am an introvert. Please respect the boundaries that I am speaking,” McClain said. His words were captured on body camera audio, but the video cameras themselves didn’t capture everything as the encounter progressed.

Officers eventually put McClain into what NPR described as a “carotid hold.”

At one point, McClain vomited.

“I can’t breathe,” McClain repeatedly said as officers pinned him to the ground.

“If you keep messing around, I’m going to bring my dog out here and he’s going to bite you,” one officer told him.

McClain eventually passed out. The encounter left him brain dead. He died at a hospital on Aug. 30, 2019.

Editor’s note: this report, which began as a developing story, has been updated since its initial publication.

[Image of McClain via the Law&Crime Network; image of Weiser via screengrab from the Colorado Attorney General’s Office/Facebook.]