Charlotte Bennett Files Federal Lawsuit Against Ex-Governor: ‘Lonely’ Andrew Cuomo ‘Was Willing to Date Someone over the Age of 21’ 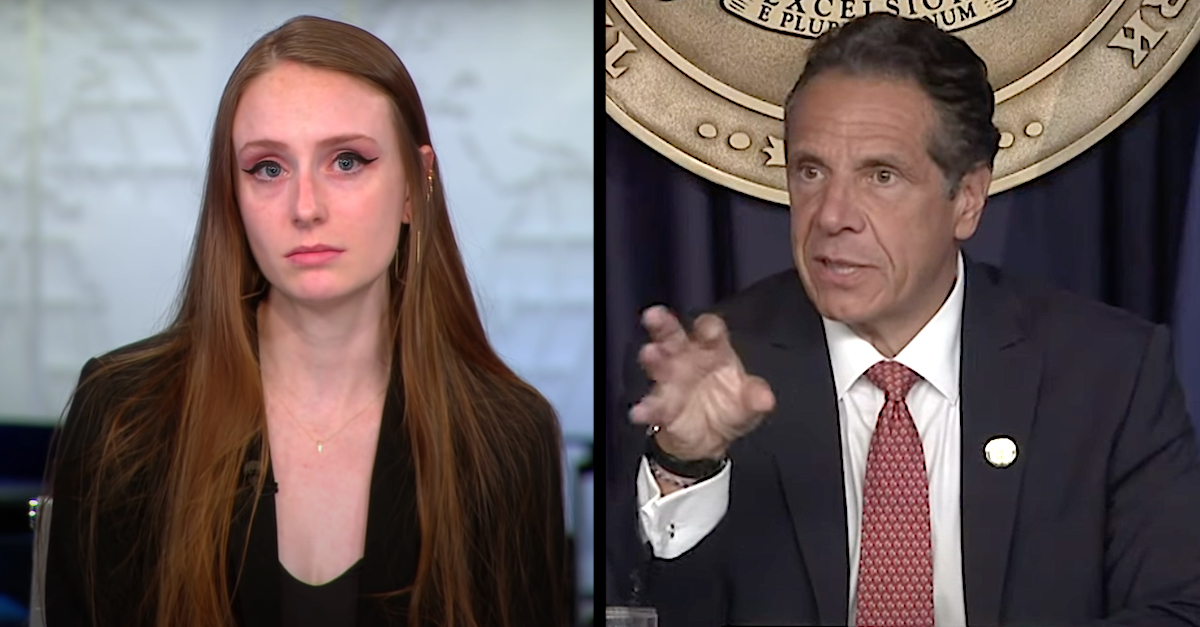 Charlotte Bennett’s complaint states that she filed the case against Cuomo and three of his top staffers “to remedy discrimination on the basis of gender in employment.”

One of the lawsuit’s opening paragraphs alleges as follows:

Ms. Bennett was a Briefer or Senior Briefer and Executive Assistant to Defendant Cuomo from May 2019 to June 2020. Throughout her employment as Defendant Cuomo’s Executive Assistant, the then-Governor subjected her to sexualized comments about her appearance, assigned her humiliating and demeaning tasks, and beginning in early June 2020, subjected her to invasive and unwanted questions about her personal life, romantic and sexual relationships, and history as a survivor of sexual assault. He told her he was “lonely,” wanted a girlfriend who lived in Albany, and was willing to date someone over the age of 21 years old. At the time of that conversation, and as Defendant Cuomo knew, Ms. Bennett was 25 years old and living with other Executive Chamber staffers in an Albany hotel. Defendant Cuomo’s comments and behavior were unwelcome and Ms. Bennett reasonably perceived them to constitute a sexual advance.

The lawsuit says Bennett reported the alleged harassment to DesRosiers and “expressed her fear of retaliation” by so doing.

“But it was not until three weeks later, and only after Ms. Bennett had disclosed the then-Governor’s conduct to other Executive Chamber staffers, that Defendants DesRosiers and Mogul interviewed Ms. Bennett about Defendant Cuomo’s sexual harassment of her,” the paperwork goes on.  “Even then, neither Defendant DesRosiers nor Defendant Mogul referred Ms. Bennett’s complaint of sexual harassment to the Governor’s Office of Employee Relations (‘GOER’) for investigation, as required by the Executive Department’s Equal Employment Opportunity Handbook (‘the Handbook’).”

The lawsuit further alleges that Bennett suffered “near-debilitating anxiety, symptoms of depression, and began suffering from a chronic neurological disorder as a direct result of Defendant Cuomo’s sexual harassment of her and the hasty and disorganized transfer of her to the health policy team.”

Bennett took a leave of absence to deal with “her declining health” and eventually “was forced into an involuntary resignation from her employment with the State because her work environment had become intolerable,” the lawsuit goes on to say.

The 60-page complaint, filed in U.S. District Court for the Southern District of New York, alleges eleven causes of action:

(1) Discrimination in violation of the Equal Protection Clause against defendant Cuomo;

(2) Retaliation in violation of the Equal Protection Clause against defendant Cuomo;

(3) Retaliation in violation of the Equal Protection Clause against defendant DesRosiers;

(5) Aiding and abetting sexual harassment in violation of the NYSHRL against defendants DesRosiers, Mogul, and DeRosa;

(6) Retaliation in violation of the NYSHRL against defendant DesRosiers;

(7) Retaliation in violation of the NYSHRL against defendant Cuomo;

(8) Discrimination in violation of the NYCHRL against defendant Cuomo;

(9) Discrimination in violation of the NYCHRL against defendants DesRosiers, Mogul, and DeRosa;

(10) Retaliation in violation of the NYCHRL against defendant DesRosiers; and

(11) Retaliation in violation of the NYCHRL against defendant Cuomo.

The lawsuit seeks damages, including punitive damages, along with litigation costs, expenses, attorneys’ fees, and interest — all in an unspecified dollar amount.

Notably, the claims do not directly involve a Title VII civil rights claim.

A publicist for Bennett’s lawyers passed along the following statement on the plaintiff’s behalf.

“My career as a public servant was abruptly cut short because of Governor Cuomo’s and his top aides’ sexual harassment and retaliation against me after I complained about Governor Cuomo’s misconduct. They must all be held accountable for their actions,” Bennett said.

Her attorneys characterized the facts as “clear.”

“Attorney General Letitia James found that former Governor Cuomo created a sexually hostile work environment that hurt women, like Ms. Bennett, who worked for him. Investigators substantiated Charlotte Bennett’s allegations and found them to be part of a pattern and practice of sexually harassing behavior by Cuomo,” said Bennett attorney Debra S. Katz. “Those around him enabled him, placated him, and covered up his egregious behavior, managing out women who complained about his misconduct rather than insisting that their complaints be investigated as the law required. He and his aides repeatedly violated the law, and they must be held accountable.”

Glavin, Cuomo’s attorney, said in a statement to the New York Times that Cuomo “has always said he didn’t harass anyone.”

She said “more and more information” was being “uncovered showing how evidence favorable to the governor was suppressed and crucial facts ignored or omitted that undermined witness credibility.”

Glavin then promised to see Bennett in court.

Cuomo resigned on Aug. 10, 2021, after several accusations of sexual harassment.

A judge dismissed a misdemeanor forcible touching case against Cuomo on Jan. 7, 2022.

A state trooper sued Cuomo for sexual harassment in February 2022. That matter remains ongoing, but several of the defendants have moved to dismiss the case.

The full Bennett complaint is below: