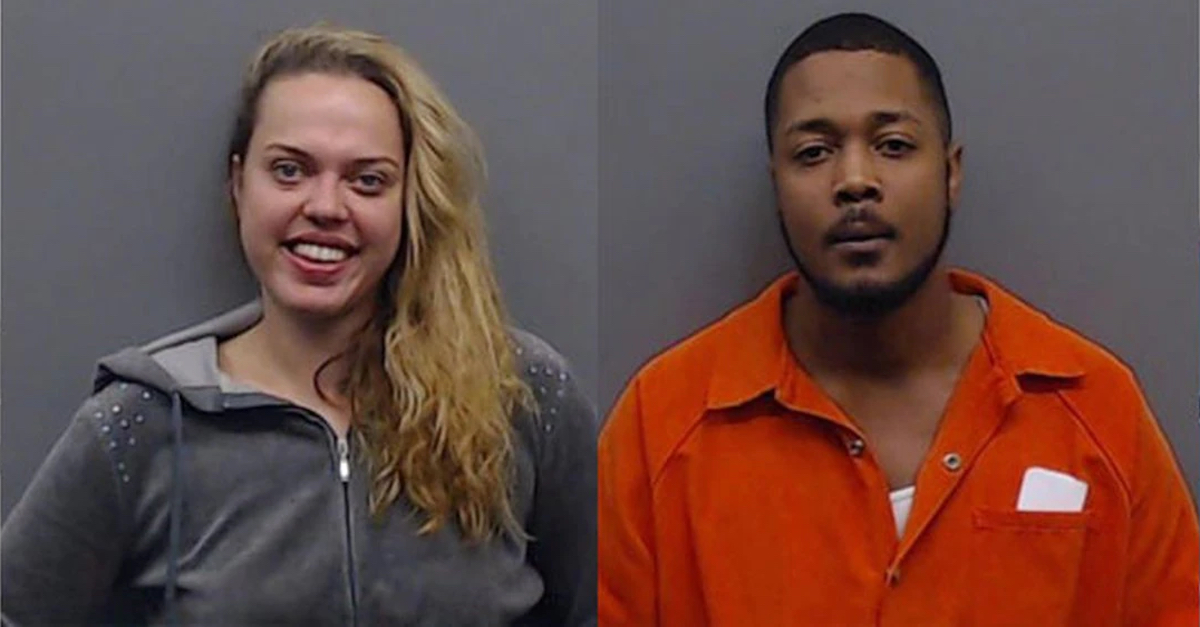 A 22-year-old woman and a 27-year-old man in Texas were arrested Saturday after they allegedly kidnapped two minor girls last month.

Deputies with the Smith County Sheriff’s Office took Teresa Swan Fletcher and Aaron Devonte Wallace into custody and hit them with two counts each of kidnapping, a third-degree felony, arrest records reviewed by Law&Crime show.

According to a probable cause affidavit filed in 114th Judicial District Court and obtained by Shreveport, La., CBS affiliate KSLA, one of the victim’s mothers on Feb. 17 called 911 and reported that her daughter was missing. The woman reportedly told a detective with the Smith County Sheriff’s Office that she had not seen her minor daughter since she and a friend left the home on County Road 420 on Sunday, Feb. 13 and got into a red four-door car allegedly driven by Aaron Wallace.

The mother reportedly described Wallace as being a “friend” of one of the minor girls. The victim’s mother reportedly told investigators that she believed her daughter was possibly being sex-trafficked by Wallace.

SCSO investigators soon learned that the victim’s minor friend had also not been seen since the morning of Feb. 13, per the affidavit. The victims reportedly continued to communicate with their friends and parents through the Facebook Messenger app for nearly two days, but both reportedly ceased all communications at approximately 11:45 a.m. on Feb. 15.

After her daughter stopped responding to messages, the victim’s mother contacted the girl’s boyfriend. The boy reportedly told her that the victim sent him several worrisome messages asking for his help, including one that was particularly alarming.

“If anything happens please no [sic] I love you,” the victim wrote, per the affidavit.

The boyfriend told SCSO deputies that the victim also sent him her cell phone GPS location, and said she needed help escaping the house which was located on Lindsey Lane. He reportedly went to the location in Tyler County and called the Tyler Police Department (TPD).

He showed police the messages from the victim, including one video message in which an adult female appeared with the victim. The adult female allegedly told the boyfriend that “his girlfriend was hers now,” as the KSLA report put it.

TPD officers reportedly went to the home and were let in after getting consent from the homeowner via a Ring doorbell. No one was inside the home but a TPD officer found a photograph of the adult woman who appeared in the video sent to the boyfriend. The woman was reportedly identified as Fletcher.

The victims reportedly returned home on Feb. 22 and spoke to SCSO detectives. Per the affidavit, the victim said she and her friend were at Fletcher’s Lindsey Lane home with Wallace when she felt something was wrong and began messaging her boyfriend for help.

Wallace purportedly spotted the victim’s boyfriend, became displeased, and dragged her outside the home.

“See that down there?” he allegedly said while pointing down the road. “Why the fuck is your ex down there? Did you send him the address?”

Wallace then allegedly stated, “Well, we gotta go,” and “dragged” the victim and her friend out the side door of the house. Fletcher and Wallace allegedly forced the minor victims into a different vehicle against their will. The car was allegedly being driven by a third adult whose name did not appear in the affidavit.

The unidentified adult allegedly drove Fletcher, Wallace, and the two victims to Shreveport, Louisiana where the three adults allegedly sex-trafficked the two minors.

“The victim explained that Fletcher used three cell phones and a silver laptop and that each cell phone was used for a different purpose,” KSLA reported. “Two of the phones were allegedly used for sex trafficking and prostitution.”

Authorities reportedly spoke with the other minor victim separately, and said the two girls’ stories matched up.

Fletcher and Wallace are currently being held in the Smith County Jail. Their bonds were both set at $500,000. Wallace has been arrested several times over the last decade on various charges, Smith County records show.

The sheriff’s office did not immediately respond to messages from Law&Crime seeking additional information about the case and asking whether the unidentified adult driver has been arrested.