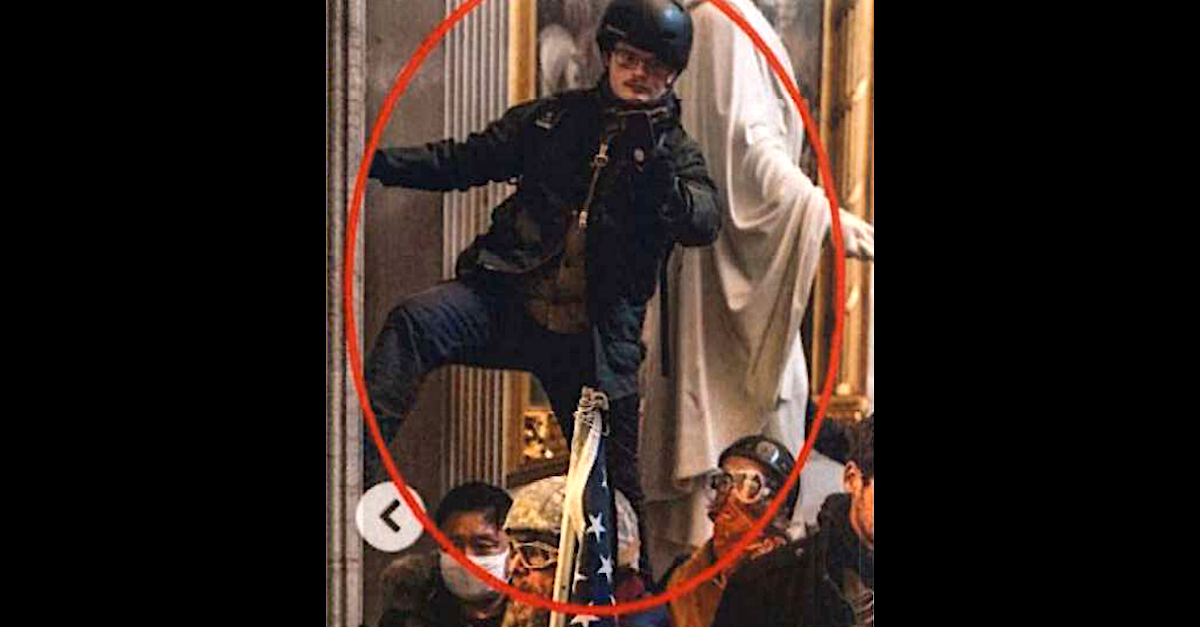 The North Carolina man who claimed to be an independent journalist “on the front lines of the assault on the [C]apitol” will be allowed to carry a concealed firearm while awaiting trial on misdemeanor charges.

Stephen Ethan Horn, 24, was seen in a photo posted by the New York Times Magazine among the crowd inside the Capitol building after Donald Trump supporters overran the police in an attempt to stop Congress from certifying Joe Biden‘s win during the 2020 presidential race. Horn was wearing a helmet and what appears to be other tactical gear, and he had apparently climbed atop the base of a statue so he could look down on the crowd.

He also told investigators that he entered the office of House Speaker Nancy Pelosi (D-Calif.).

Horn said that he was an independent journalist, although prosecutors said that an FBI tipster who identified Horn was “unaware of any media credentials Horn possessed.”

“I was on the front lines of the assault on the [C]apitol,” Horn said in a Facebook post, according to prosecutors.

“I did not enter the capitol building as part of the protest, or for cheap thrills, but to accurately document and record a significant event which was taking place,” he allegedly posted.

U.S. District Judge Timothy Kelly, a Trump appointee, granted Horn’s request Tuesday to modify the conditions of his pretrial release. Horn had asked for permission to carry a concealed weapon, which he is licensed to do in the state of North Carolina.

Since his arrest in April, Horn has been barred from possessing a “firearm, destructive device, or other weapon,” according to court filings.

At the hearing, Assistant U.S. Attorney Michael James argued that Horn shouldn’t be allowed to carry a gun because of his participation in the Jan. 6 siege which temporarily succeeded in stopping the peaceful transition of power.

James also said that allowing Horn to carry a gun could endanger the safety of pretrial services personnel and probation officers who supervise Horn ahead of trial and who make sure he’s in compliance with the conditions of his release.

James noted that Horn didn’t say in his papers that his request to have a gun for self-defense stems from specific threats related to his participation in the Jan. 6 riots.

“The defendant does not make an argument that ‘I need this for self-protection because since Jan. 6 I’ve been threatened by individuals,'” James said. “That’s not in any of his papers as I read it.”

According to a review of Horn’s court filings, Horn didn’t point to any specific threats beyond stating that his “personal circumstances have changed such that he now has the desire to possess a concealed handgun for self-defense purposes, as allowed under North Carolina law.”

At the hearing Tuesday, Horn’s attorney Marshall Ellis implied — but did not say outright — that Horn was facing threats because of his role in the Jan. 6 Capitol attack.

“Mr. Horn did receive threats recently that did lead him to file a police report,” Ellis said. “He did try to get a copy of that report for purposes of today’s hearing,” Ellis noted, but the report had not yet been prepared.

“That did lead to us filing the request,” Ellis added.

Ellis also said that Horn isn’t a “typical offender” who should be deprived of the right to carry a firearm.

“[Horn has] no criminal history, [he’s a] college graduate, employed — he’s just not the typical offender that we see in the Eastern District of North Carolina, and probably in D.C., too,” Ellis said. “That’s what makes this case different and why the firearm prohibition is not needed here.”

Kelly had indicated at the start of the hearing that he was inclined to grant Horn’s request — and he ultimately did.

“This is one of the challenges in these cases, to consider the [actions of individual defendants] but not close my eyes to the broader event that happened that day, and I have spent [time] in sentencing and various contexts describing exactly what I think about what happened that day and how serious it was because of how it robbed our country and interrupted our tradition of a peaceful transition of power,” Kelly said.

“The events of that day were extremely serious,” he added.

However, the fact that Horn didn’t have a criminal history — “not even an arrest, that’s pretty important to me,” Kelly said — and had received the requisite “mental fitness qualification” from North Carolina to carry a concealed firearm reassured the judge that Horn should be allowed to carry a gun.

Toward the end of the hearing, both James and Ellis told Kelly that the case appears to be headed for trial. Kelly noted that he has a backlog of cases, so it will likely be months before the case reaches a jury, if it doesn’t settle beforehand, as dozens of Jan. 6 misdemeanor cases already have.