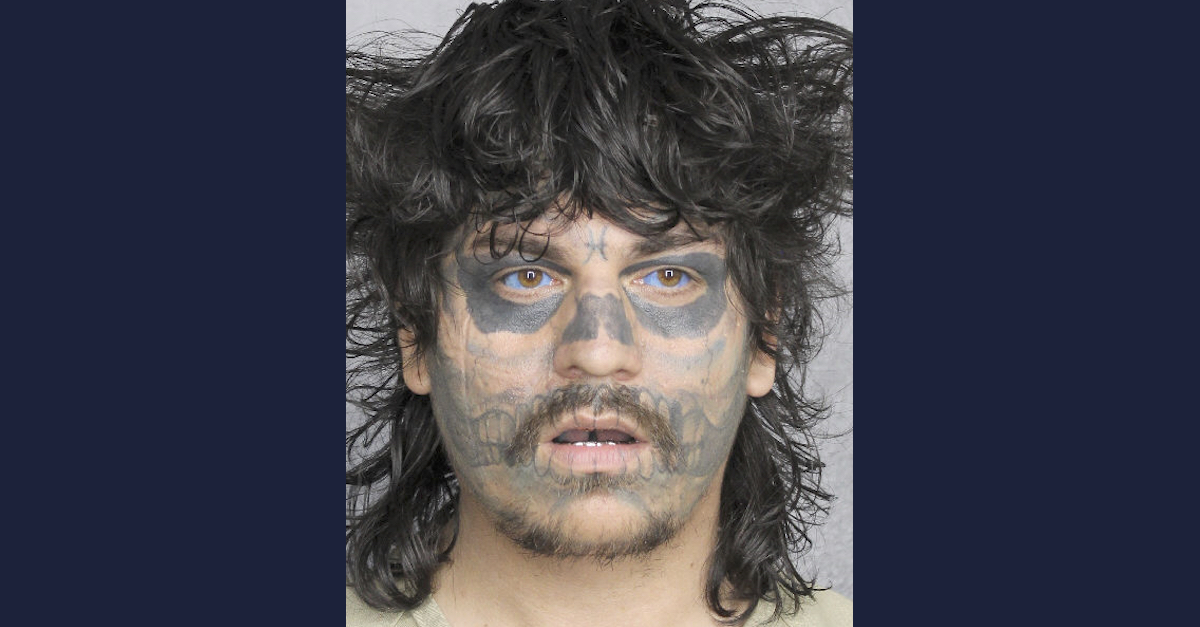 A Florida man was arrested for allegedly placing dead animals on a memorial to the victims of the Parkland school shooting massacre.

Robert Mondragon, 29, stands accused of three counts of removing or disfiguring a tomb or monument, violating a risk protection order, and violating his probation on five previous battery and indecent exposure charges, according to the Broward Sheriff’s Office. He is currently being held without bond in a North Broward County jail.

The specific allegations against Mondragon are as bizarre as they are disturbing. Detectives say they eventually turned up evidence that the defendant has a “fascination with mass school shootings.”

According to the BSO, the investigation began in late July of this year when “a school crossing guard discovered a dead duck with its chest cavity cut open” on a park bench at the MSD Memorial Garden, which is adjacent to Marjory Stoneman Douglas High School, the site where 14 children and three staff members were murdered on Aug. 14, 2018.

The next day the crossing guard discovered a similarly gruesome display: a dead raccoon on the same bench. That made a pattern. Ten days later, a sheriff’s deputy found a dead opossum on the bench.

Law enforcement then consulted surveillance footage. According to the BSO, they discovered that “a white Nissan with all black rims or tires with no hubcaps” arrived at the memorial late on the night before the opossum was found. Police claim the footage shows a man get out of the car, go to the passenger’s side, then enter the memorial for several minutes before returning to the vehicle and driving away.

After that, detectives were on the lookout for a vehicle that matched the description. And they allegedly did not have to wait long.

Late the very next night, a Sunday, a BSO Parkland district deputy “saw a white Nissan Sentra with illegal window tint that matched the vehicle description from the surveillance video,” the agency said. A traffic stop ensued wherein the deputy claims to have seen “bird feathers and blood on the front passenger side floorboard.”

That alleged discovery prompted an inquiry. Mondragon allegedly told the deputy that he had a dead bird in his car because he enjoyed “the metal and blood smell that emit from the dead animal.”

Details about what happened in the interim are scarce but the defendant was arrested and charged on the night of Aug. 4, 2022 with the probation violation and risk protection order violations.

After his arrest, the BSO says, detectives continued their “investigation regarding the dead animals intentionally placed on the memorial.” Search warrants were obtained for Mondragon’s car, home, cellular phone, and social media accounts. According to the sheriff’s office, investigators found a photo of the defendant holding a photo of a dead duck with a hole cut into its chest as well as a photo of a dead raccoon on the floorboard of a car’s passenger side.

[D]etectives said further investigation revealed Mondragon’s obsession with school shooters, both real and fictional. They said Mondragon’s facial tattoos resemble those of Tate Langdon, the character from the television series American Horror Story based on the Columbine High School massacre. They said they also found text messages about school shootings and internet searches about school shooters, how to break into steel doors, shootings involving multiple victims, pipe bombs, as well as slang terms for killing cops. Further concerning evidence revealed that two weeks before the end of the 2021/2022 school year, Mondragon walked the path the MSD school shooter took from the high school to Walmart on Feb. 14, 2018.

In comments to the South Florida Sun Sentinel, Broward Sheriff Gregory Tony reportedly described Mondragon as “a potential school shooter” who investigators were able to get “off the street.”

The sheriff went on to allege that the defendant has been “popping up on the radar since 2013″ and that he has a “desire to create an active shooter event in our school system,” citing his “alarming amount of inquiries on the Internet looking at old active shooter events.”

“He fits every classification that it’s coming,” Tony added. “We’ve been lucky, and luck is not a strategy.”

The perpetrator of the Parkland massacre, Nikolas Cruz, 24, is currently in the process of a trial to determine his eventual penalty. He pleaded guilty to the murders in October 2021.