Ex-Colorado Jail Guard Pleads Not Guilty to Driving to Vermont, Posing as U.S. Marshal, and Dumping Murder Victim’s Remains in the Snow 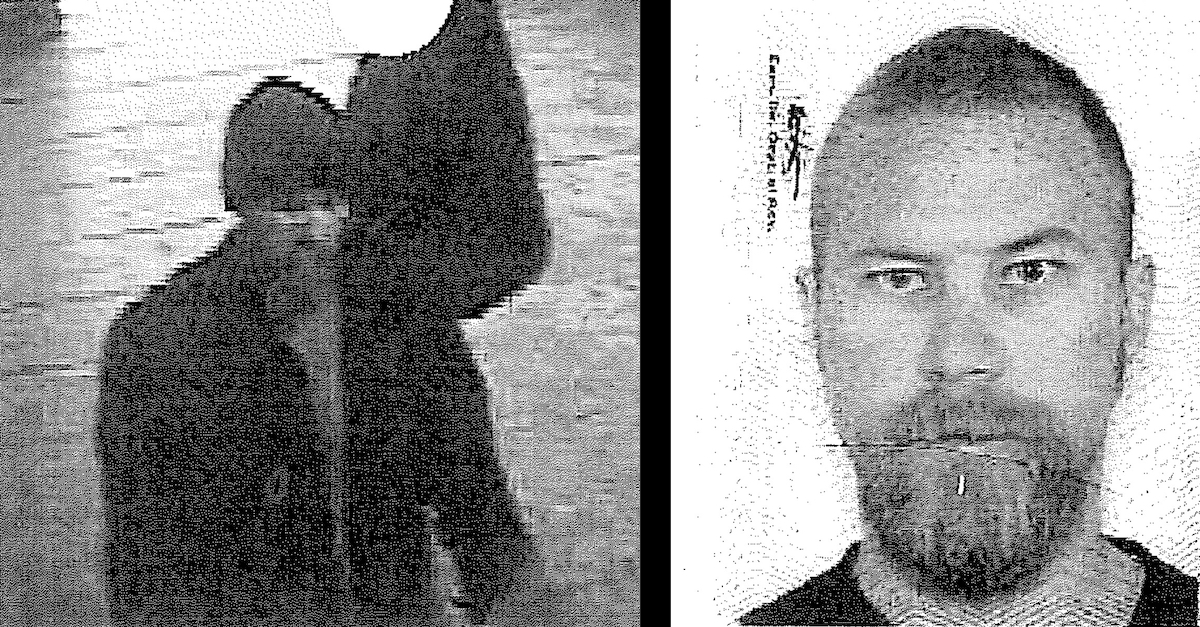 Walmart security footage (left) shows a man the FBI believes to be Jerry Banks, who is pictured at right in a Colorado driver’s license photo. (Images from an FBI affidavit filed in federal court in Vermont.)

A former Colorado jail guard who stands informally accused of killing a Vermont man as part of an alleged murder-for-hire has pleaded not guilty to a federal kidnapping count.

Jerry Banks, 34, of Fort Garland, Colorado, was charged in April with one count of kidnapping or abduction “for reward and otherwise” while “traveling in interstate commerce and using a facility and instrumentality of interstate commerce.”  Banks was arrested in Montana while working in Yellowstone National Park, the U.S. Attorney’s Office for the District of Vermont said on April 8 of this year.

As Law&Crime has previously reported in detail, the alleged interstate travel and communications were the lynchpin for the federal charge.  Though federal prosecutors have stated without equivocation that they believe Banks murdered Gregory Davis, 49, near St. Johnsbury, Vermont, on Jan. 6, 2018, Banks is not actually charged with murder. 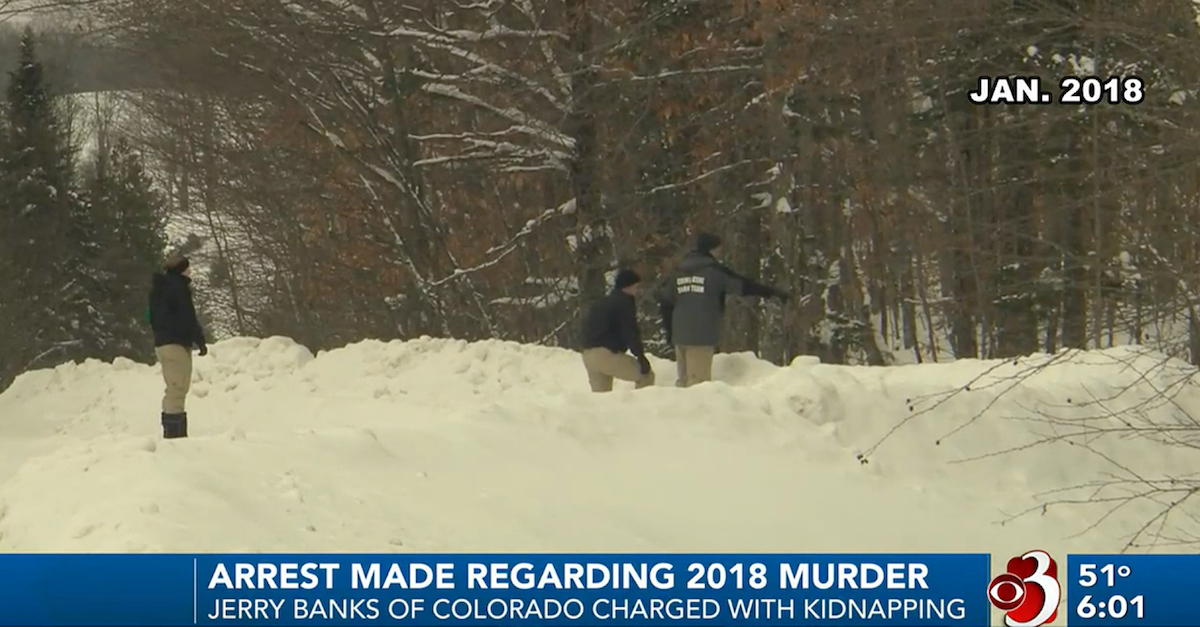 A 2018 screengrab from WCAX-TV shows the scene where Gregory Davis was found dead.

FBI affidavits say Davis was “arrested” in front of his wife and son at his home one winter night by a man pretending to be an apparently convincing version of a U.S. Marshal.  Prosecutors believe Banks was the phony who coerced or forced Davis away from his home under the guise of a supposed arrest warrant.  Banks then is said to have murdered Davis and dumped his body in a snowbank a few miles away from his house.

Local authorities told Burlington, Vermont CBS affiliate WCAX in 2018 that Davis was handcuffed and shot “multiple” times in the “head and torso.”  A passing driver found Davis’s body in the snowbank.

Banks allegedly bought fake law enforcement gear and U.S. Marshals Service regalia as part of the nefarious operation; the FBI says it has records of those transactions as evidence. 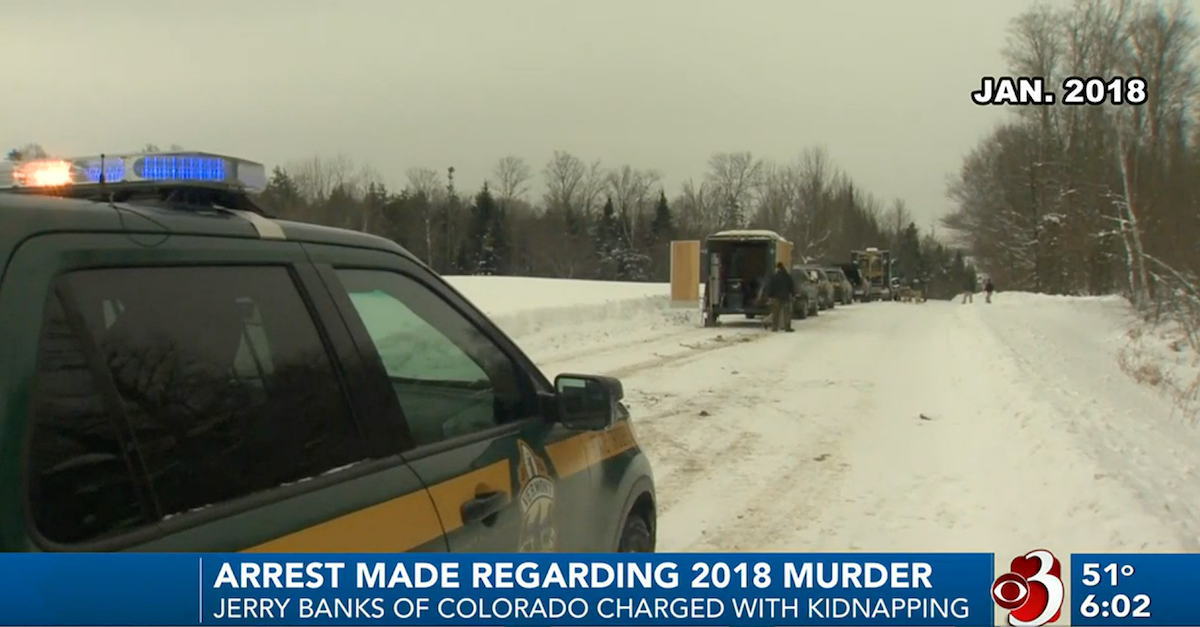 A 2018 screengrab from WCAX-TV shows the scene where Gregory Davis was found dead.

Court papers say a Kansas Highway Patrol officer stopped Banks for an alleged lane violation on Jan. 8, 2018, just two days after the killing.  The officer who conducted the stop described Banks as “extremely nervous” and said Banks’s vehicle contained “a gun, tactical vest and law enforcement equipment.”  A mattress was also in the vehicle, according to the FBI affidavit.  A man believed to be Banks also was caught by a Walmart security camera in Missouri buying a prepaid phone that was used to facilitate the murder, federal authorities have said.  The feds believe Banks used two burner phones as part of the scheme.

Banks had at least some law enforcement experience.  The Denver Post reported Friday that Banks was a part-time jail guard with the rural Costilla County Sheriff’s Office between Aug. 15, 2017, and Feb. 14, 2018, according to records maintained by the Colorado Peace Officer Standards and Training Board (POST).  In other words, Banks was a certified Colorado law enforcement officer when federal prosecutors say he murdered Davis on Jan. 6, 2018.

A clerk with the sheriff’s office who declined to give her last name said that Banks worked in the detention center. She didn’t know what date he stopped working there, but said he called one day and said he wasn’t coming in anymore. Banks’ arrest affidavit states he held a part-time job with the agency.

The sheriff’s office did not respond to a follow-up email Thursday requesting more information about Banks’ role at the agency and the dates of his employment.

The sheriff’s office also did not respond to a request for material filed by Law&Crime on Friday.

Online POST records suggest that Banks remains certified in the Centennial State, but the POST website explicitly says that any officer’s certification can be revoked if the officer is “the subject of a criminal investigation” for certain disqualifying crimes or if “criminal charges for such a crime” are filed.  All felonies are disqualifying offenses, according to state law, as are many misdemeanors; the “unlawful use or threatened use of physical force” is also disqualifying.

The murder plot also is alleged to have involved at least three other direct participants. Dr. Serhat Gumrukcu, 39, a research scientist from Los Angeles, California, and Berk Eratay, 35, of Las Vegas, Nevada, were both indicted for allegedly conspiring to use interstate commerce facilities — namely, cell phones — to call for the hit.  According to prosecutors, another man, Aron Lee Ethridge, 41, of Henderson, Nevada, was the man Banks called to “inform him [Ethridge] that Davis had been successfully kidnapped and murdered.” Ethridge is charged with conspiring to help kidnap Davis. 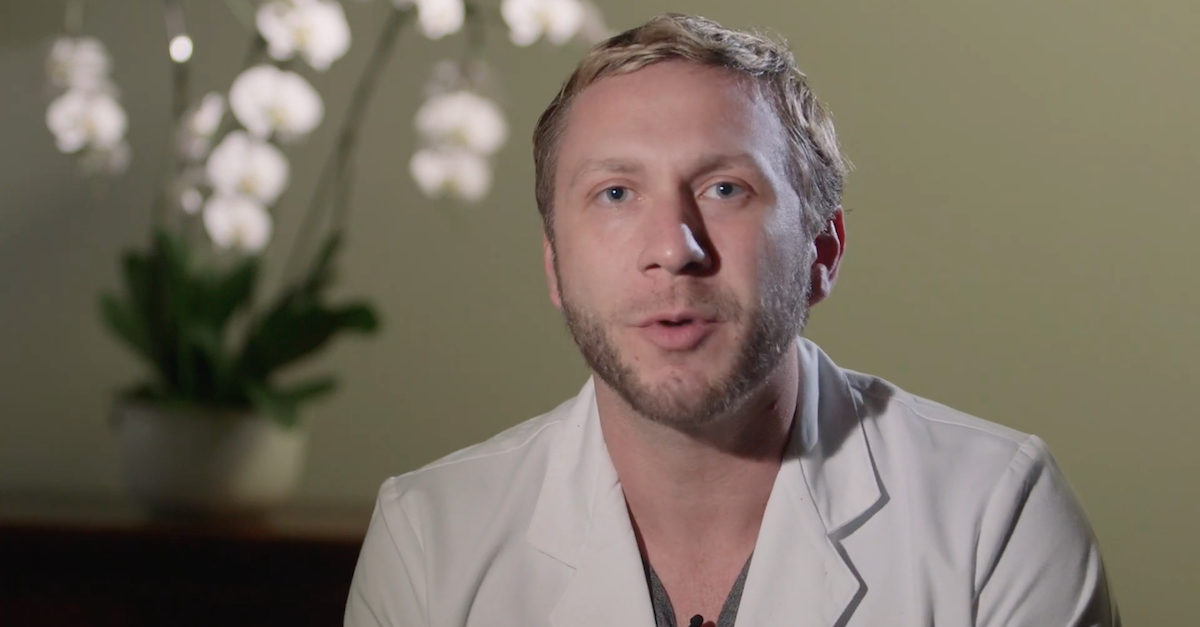 Documents in Eratay’s case laid out the alleged motive and characterized Gumrukcu as the ringleader:

As Law&Crime previously noted, the feds believe Serhat Gumrukcu wanted Davis dead because Gumrukcu was negotiating a multi-million-dollar deal involving Enochian Biosciences, a company he helped to launch.  Federal court documents allege that Davis potentially stood in the way of that deal.

“Gumrukcu therefore had a strong motive to prevent Davis from reporting yet another fraud, and likely threatening the Enochian deal,” the documents state.  “At present, Serhat Gumrukcu appears to own over $100 million worth of Enochian stock. In May 2022, about a week before his arrest, Serhat Gumrukcu generated $2 million in cash from an Enochian stock sale.”

Banks and Ethridge face a maximum possible sentence of life in prison.  Gumrukcu and Eratay face that punishment as well — or the death penalty.

“This defendant is eligible for detention because his case involves a crime of violence carrying a maximum term of imprisonment of ten years or more, an offense for which the maximum sentence is life imprisonment, and a serious risk that the defendant will flee,” prosecutors wrote while seeking pretrial detention (we’ve omitted the citations to federal statutes).  “The Court should detain the defendant because there are no conditions of release that will reasonably assure the appearance of the defendant and the safety of the community.”

The defendant’s prior actions also demonstrate a serious risk to the safety of potential witnesses. The complaint affidavit outlines strong evidence that the defendant killed someone he did not know for money. Searches conducted at his Colorado residence and his temporary quarters in Wyoming resulted in the seizure of firearms, including a 9 mm handgun and a ghost gun. Someone who would kill for money would likely kill or improperly influence a witness or otherwise seek to influence the course of a trial that would result in his life in prison.

The detention motion and order are both below:

Several other caches of documents in related cases are also below: