After Repeatedly Proclaiming His Innocence and Claiming He Was ‘Framed,’ Megachurch Pastor Pleads Guilty to Child Sexual Abuse 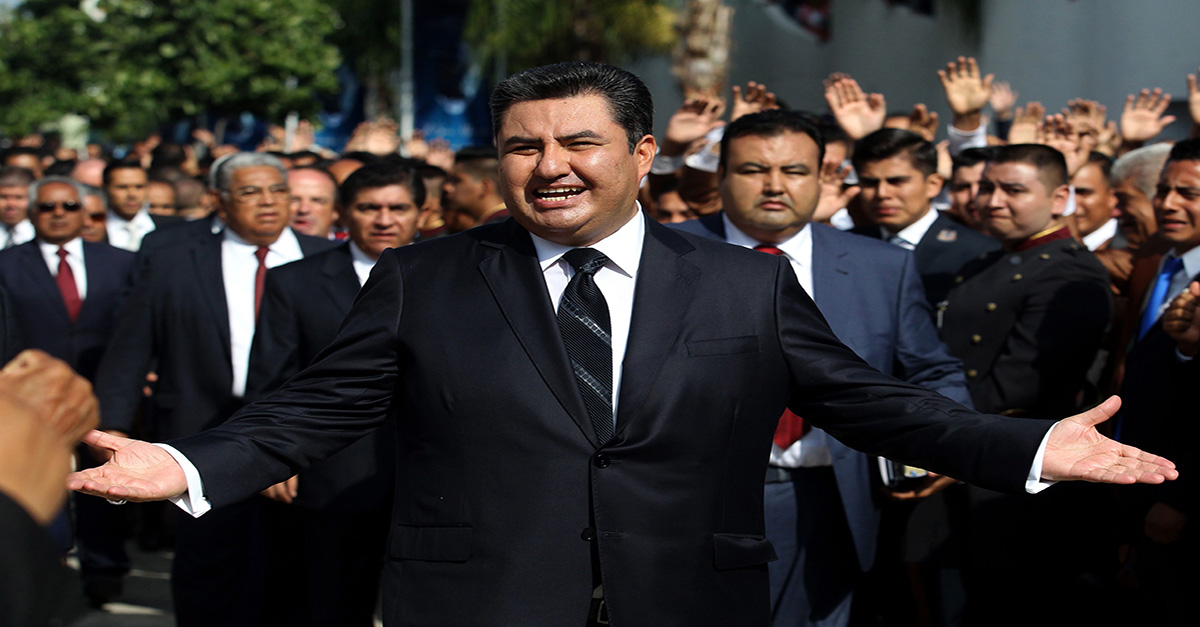 This picture taken on August 9, 2017 shows the leader of the Church of the Light of the World, Naason Joaquin Garcia, walking among his parishioners in Guadalajara, Mexico.

The leader of a prominent Christian megachurch pleaded guilty to multiple child sexual abuse charges on earlier this week.

Naasón Joaquín García, 53, admitted to two counts of forcible oral copulation involving minors and one count of a lewd act upon a child who was 15 in Los Angeles Superior Court on Friday.

As Law&Crime previously reported, Garcia styles himself as the “apostle” of the Church of the Living God, Pillar and Ground of the Truth, The Light of the World, which claims membership in excess of five million throughout the United States and dozens of other countries. He was indicted by the California Attorney General’s Office on sex trafficking charges and arrested in the summer of 2019.

The church is based in Mexico.

While initially held on $50 million bail, his attorneys claimed — in a bid to lessen the amount — their client was “framed” by women connected to “disgruntled former church members” and that he was actually “the victim of a concerted conspiracy to frame and extort him.”

Those efforts did not yield the desired results.

The defendant is currently jailed on $90 million bail.

“Today’s conviction sends a clear message that sexual exploitation is never acceptable in California,” Attorney General Rob Bonta (D) said in a statement. “We will hold you accountable if you break the law. As the leader of La Luz del Mundo, Naasón Joaquín García used his power to take advantage of children. He relied on those around him to groom congregants for the purposes of sexual assault.”

In October 2020, co-defendant, Alondra Ocampo, one of at least four co-defendants in the case against García, pleaded guilty to four felony counts involving the sexual abuse of minors. Investigators, citing five underage victims, described Ocampo as a “handmaiden” who groomed girls and sexually abused them before forcing them to sexually abuse other minor girls who were part of the apostle’s flock.

Ocampo’s guilty plea prepared her to testify against the defendant and was seen as a major blow to his legal defense — even as he, his attorneys, and his church adamantly maintained his innocence.

Around the same time, a judge in Los Angeles dismissed four counts of extortion and two counts of forcible rape of a minor and unlawful sexual intercourse with a minor against García, citing insufficient evidence. Those legal victories were praised by the church at the time.

“Today’s decision demonstrates, as we have always said, that the Apostle is innocent and his innocence will be judicially proven through the course of the trial” a church spokesperson said in a written statement to the Law&Crime Network’s Brian Ross Investigates in 2020. “We reiterate that his procedural and constitutional rights must remain in force, such as the presumption of innocence and the right to due process, as well as the right to be judged impartially and without bias.”

Those celebrations were ultimately short-lived.

“She actively recruited and groomed girls for him,” her attorney Fred Thiagarajah told the Associated Press. “She would target girls and bring them into his inner fold. She was tasked with sexualizing these girls and facilitating their abuse.”

Instead of casting his luck with a judge and jury, after years of defiance, the defendant performed a legal volte-face.

“Today’s conviction can never undo the harm, but it will help protect future generations,” the attorney general’s statement continued. “I am incredibly grateful to our team at the California Department of Justice for their dedication to securing justice and fighting abuse on behalf of the people of California. We will always stand with Californians against injustice.”

On Friday, Oaxaca pleaded guilty to assault likely to cause great bodily injury.

Ocampo will be sentenced some time in the future.

The fourth co-defendant indicted in the case, Azalea Rangel Melendez, remains at large.