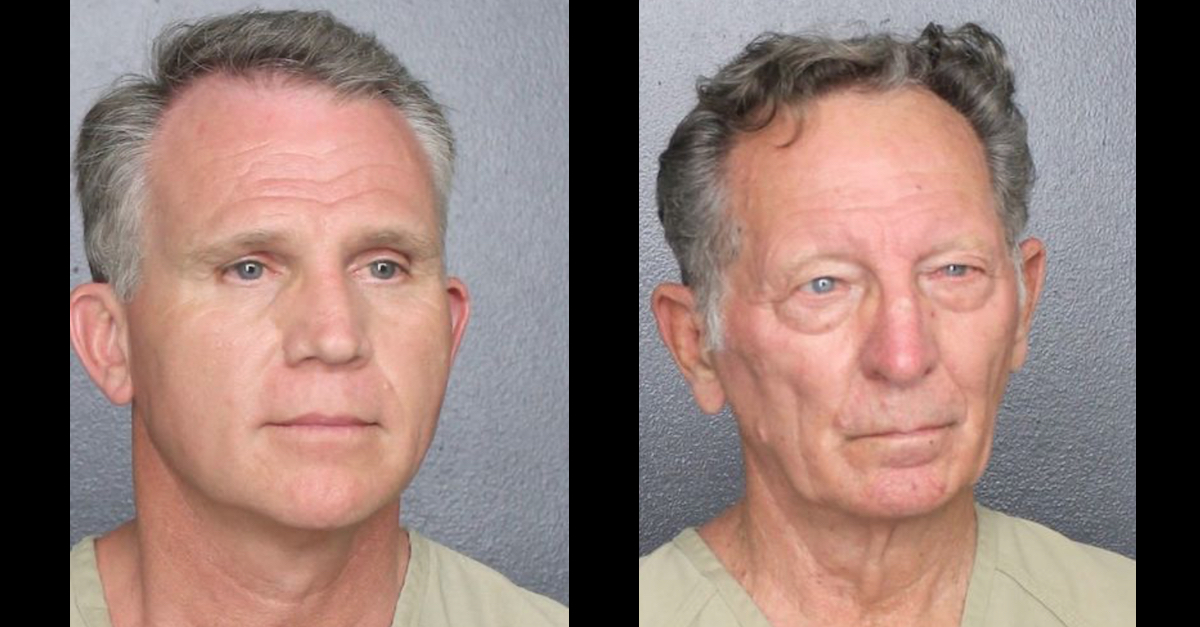 Two fake U.S. Marshals, Wayne Brown, Jr., 53, and Gary Brummett, 81, are facing criminal charges after prosecutors say they claimed to be real federal law enforcement officers while they fought to avoid wearing face masks at a South Florida hotel and restaurant. The men were arrested by a real U.S. Marshal after hotel employees became suspicious and called them in, federal court documents say.

An affidavit attached to a criminal complaint on file in the Southern District of Florida says local sheriff’s deputies first arrived at the Wyndham Deerfield Beach Resort in Deerfield Beach. The sheriff’s department called the real U.S. Marshal’s Office to figure out why two men — Brown and Brummett — claimed to be U.S. Marshals while in the hotel’s lobby and restaurant.

The affidavit explains what happened when authorities contacted the men in a downstairs restaurant:

BROWN JR and BRUMMETT were sitting at a dining table at the restaurant. BSO [Broward Sheriff’s Office] deputies requested to see their identification. On their belts, BROWN JR and BRUMMETT were wearing authentic appearing circular badges with a seven-point star that read “Cherokee Nation Marshal” along the circle and “Aniyvwiya Criminal Justice Deputy” within the star. BROWN JR. and BRUMMETT provided BSO deputies similar identification cards which were titled, “Aniyvwiya-Tribal-nation . . . Cherokee-Nation-Of-The-[In]dians . . . :Grand-Fire-Council: [Government/ID].” Around their necks, BROWN JR and BRUMMETT wore laminated cards titled “FACEMASK EXEMPT NOTICE/CARD” which stated “I am exempt from any ordinance requiring face mask usage in public . . . Wearing a face mask poses a mental and/or physical risk to me. Under the Americans with Disabilities Act (ADA), I am not required to disclose my condition to you.” The cards also listed a “Department of Justice ADA Violation reporting number: (800) 514-0301.” The interactions with BROWN JR and BRUMMETT were captured on BSO police body camera.

The hotel’s front office manager told the assembled authorities that the whole thing started when Brummett asked the front desk for coffee. When the manager and another employee asked Brummett to wear a mask, he said he was “medically exempted,” the document continues. When the hotel employees repeated the request, Brummett again refused and referenced the alleged $75,000 fine on his laminated ID card. When the employees requested for a third time that Brummett wear a mask, Brummett “pointed towards his belt badge” and claimed he was a federal law enforcement officer.

“Do you know what this means?” Brummett said, according to the affidavit. “I’m a ‘U.S. Marshal’ and can have you arrested if you force me to wear a mask.”

What Brummett probably didn’t anticipate was that one of the hotel employees has a cousin who is a real U.S. Marshal. Brummett’s behavior was so out of the ordinary according to that employee’s knowledge of her cousin’s demeanor that hotel management agreed to contact law enforcement “to determine the legitimacy of BRUMMETT’s claims.”

Brown is accused of similarly “pointing to the badge on his belt and showing the laminated card around his neck” when hotel staff asked him to wear a mask several days prior. “The Front Desk Agent advised that she continued to check BROWN JR into his hotel room, but thought it was strange for a federal agent to make an issue about wearing a mask,” the court papers say. Even before that interaction, Brown is accused of threatening to have the hotel manager arrested and the hotel fined if forced to wear a mask.

The real U.S. Marshal who responded to the hotel and who investigated the case said neither Brown nor Brummett are employees of the U.S. Marshals Service — nor have they ever been. The affidavit says the two defendants also are not — nor have ever been — employed by the Cherokee Nation Marshal Service and that their I.D. badges were fake.

A local prosecutor in Florida tweeted last year about badges which appear to be similar to the ones the defendants are accused of wearing.

“Please note that such cards have NO legal authority and businesses should not alter their mask policies based on them,” wrote Palm Beach County State’s Attorney Dave Aronberg in a tweet thread. “Many of these cards illegally feature the seal of the U.S. Department of Justice, which is a federal crime.”

My office has received reports of individuals attempting to use a "Face Mask Exempt Card" to evade Palm Beach County's mandatory mask order.

Please note that such cards have NO legal authority and businesses should not alter their mask policies based on them. 1/ pic.twitter.com/5Oc0s1wAJQ

Aronberg noted that the ADA had long ago issued a warning against the validity cards or their legal arguments. After such cards went viral last July, DOJ also debunked the idea that there is such a thing as a legitimate “Fake Mask Exempt Card.”

Brown and Brummett are charged with the false personation of a federal officer under 18 U.S.C. § 912. It reads:

Whoever falsely assumes or pretends to be an officer or employee acting under the authority of the United States or any department, agency or officer thereof, and acts as such, or in such pretended character demands or obtains any money, paper, document, or thing of value, shall be fined under this title or imprisoned not more than three years, or both.