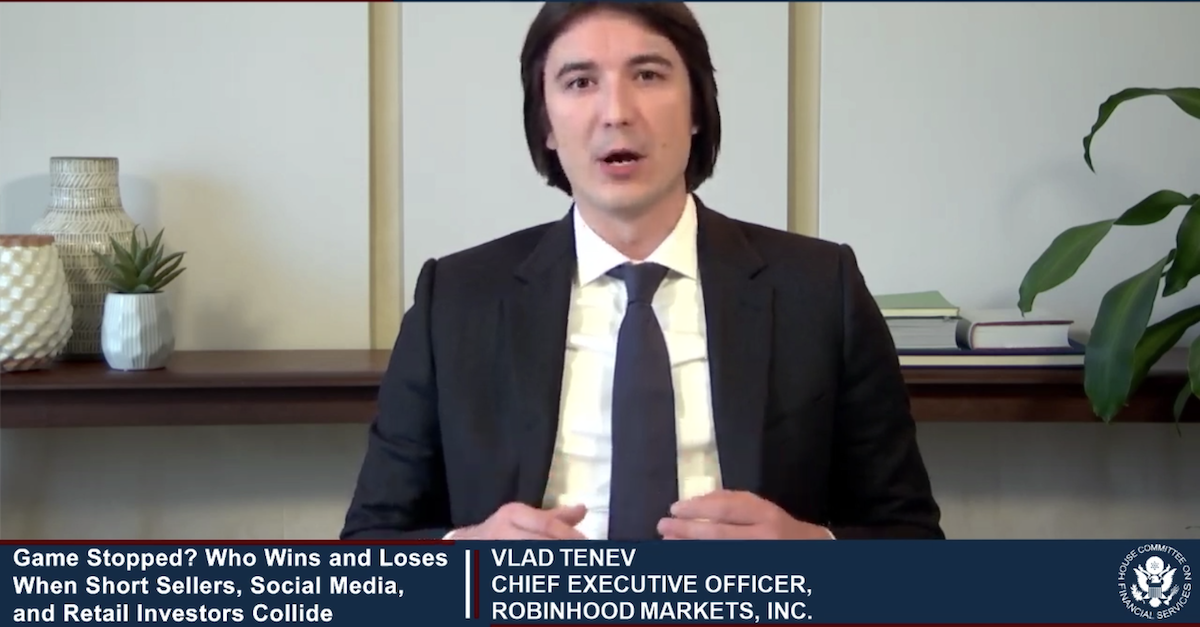 Under fire for Robinhood’s decision to stop “unprecedented” trading in GameStop in January, the company’s CEO Vlad Tenev denied that the decision represented caving to hedge fund investors, and multiple top hedge fund executives denied leaning on the company to do so.

“What we experienced last month was extraordinary, and the trading limits we put in place on GameStop and other stocks were necessary to allow us to continue to meet the clearinghouse deposit requirements that we pay to support customer trading on our platform,” Tenev wrote in prepared remarks that he recited on Thursday afternoon. “We have since taken steps to raise $3.4 billion in additional capital to allow our customers to resume normal trading across Robinhood’s platform, including trading in the stocks we restricted on January 28.”

“There are many whose beliefs that the system is rigged against them has been reinforced,” Waters noted in her introductory remarks.

That belief sparked progressive Congresswoman Alexandria Ocasio–Cortez from New York to immediately call for the proceedings on Jan. 28, the same day online brokerages limited the trading of GameStop, AMC Entertainment Holdings Inc. and other stock picks favored by the r/WallStreetBets subreddit.

“WallStreetBets may look sophomoric or chaotic from the outside, but the fact that we are here today means they’ve managed to raise important issues about fairness and opportunity in our financial system,” Reddit co-founder Steve Huffman testified.

The online collectives pushed those shares and others to all-time and yearly highs in an effort to squeeze out short sellers.

When pressed by Rep. Carolyn Maloney (D-N.Y.) on the restrictions, Tenev struck a note of contrition.

“For our customers, I’m sorry, and I apologize,” Tenev said. “Please know that we are doing everything we can to make sure this won’t happen again.”

Robinhood immediately became the target of a class action lawsuit over the decision, and the intense public interest in a fight pitting masses of common internet investors against billionaire hedge fund may have temporarily disabled the federal court database.

That background brought high anticipation to a hearing bringing together the central players of that drama under scrutiny: Tenev, Huffman, Melvin Capital CEO Gabriel  Plotkin, Reddit CEO Steve Huffman; and Keith Gill, a YouTube streamer known as “Roaring Kitty” known on Reddit by the handle “DeepF***ingValue.”

Sworn with them was an expert witness: Jennifer Schulp, director of financial regulation studies at the CATO Institute who noted that stock ownership is skewed toward the already wealthy. She made a point that, for all the ink spilled about the stock market rebellion involving GameStop, the ultimate effect would be limited.

“Despite the huge trading volume and rapid increase in value, only a small part of the market was affected,” Schulp said.

The Securities and Exchange Commission is looking into the events of late last month, and one securities law professor previously told Law&Crime that regulators would struggle to build a case, a judgment that Schulp appeared to agree with during the hearing.

“I cannot opine on whether any regulatory changes will be warranted based on this incomplete information,” Schulp said, through she added the answer likely will be “no.”

Facing much of the speculation about the regulatory crackdown was Gill, who was identified by the New York Times as one of the major players, but the YouTuber cast that proposition as silly.

“The idea that I use social media to promote GameStop stock to unwitting investors and influence the market is preposterous,” Gill testified.

To the short sellers in GameStop who lost billions, Gill added: “It is tragic that some people lost money, and my heart goes out to them.”

Rep. Patrick McHenry, the top Republican on the Committee, framed the inquiry as one of a “larger truth: a fundamental change is happening.”

Noting that many traded “in protest,” McHenry pressed Tenev on why Robinhood restricted customers on the “buy” side only.

“Preventing customers from selling is a very difficult and painful experience,” Tenev replied.

Kenneth Griffin, a billionaire Republican mega-donor who is Citadel’s top executive, disavowed any role in Robinhood’s action, but he kept his cards close to the vest under questioning by Rep. Brad Sherman, a California Democrat who exploded at what he characterized as the CEO’s evasions.

“You are doing a great job of wasting my time,” Sherman told Griffin at one point. “If you are going to filibuster, you should run for the Senate.”

Like Tenev, Melvin Capital’s CEO denied any role in the trading restrictions.

“Like you, we learned about those visits from news reports,” Plotkin testified.

Claiming to be the victim of a “misleading frenzy,” Plotkin described being the target of antisemitic abuse and vitriol.

“It’s very clear we need a second Holocaust,” he recalled one message stating. “The Jews can’t keep getting away at this.”

The hearing is ongoing.

(Screenshot of the hearing from USCongress.gov)