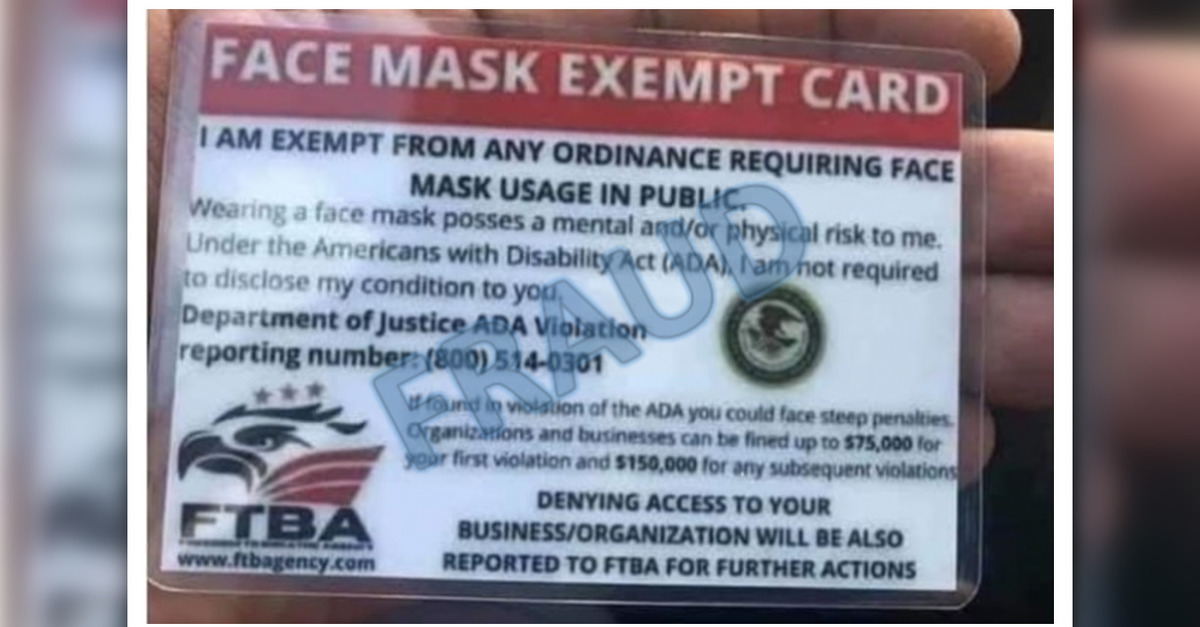 The U.S. Department of Justice (DOJ) is making an effort to combat misinformation about the novel coronavirus (COVID-19) that is currently being passed around among people critical of public safety measures used to slow the spread of the deadly contagion.

“Do not be fooled by the chicanery and misappropriation of the DOJ eagle,” U.S. Attorney for the Middle District of North Carolina Matthew G.T. Martin said in a statement earlier this week. “These cards do not carry the force of law. The ‘Freedom to Breathe Agency,’ or ‘FTBA,’ is not a government agency.”

I AM EXEMPT FROM ANY ORDINANCE REQUIRING FACE MASK USAGE IN PUBLIC.
Wearing a face mask posses [sic] a mental and/or physical risk to me. Under the Americans with Disability [sic] Act (ADA), I am not required to disclose my condition to you.

The card advises holders to file a “Department of Justice ADA Violation” and directs users to the official ADA Information Line.

“If found in violation of the ADA you could face steep penalties,” the card’s text continues. “Organizations and businesses can be fined up to $75,000 for your first violation and $150,00 for any subsequent violations.”

A final all caps message on the card reads: “DENYING ACCESS TO YOUR BUSINESS/ORGANIZATION WILL BE ALSO REPORTED TO FTBA FOR FURTHER ACTIONS.”

The card claims to have been issued by the so-called “Freedom to Breathe Agency,” which is not a government agency and does not appear to be a real organization–at least not anymore.

“We are a movement of proud American citizens who are dedicated to protecting their freedom and liberty,” an archived version of their website explains. “​Our team consists of people from all walks of life from attorneys, doctors, business owners, CEOs, moms and dads who want to make a difference in this world and create a promising future for our children.”

The group also has the following mission statement:

Oxygen is No.1 nutrient for every living organism including humans. Wearing a mask is an unhealthy obstruction of oxygen flow that can lead to hypoxemia and hypoxia, can permanently damage the brain, lungs, heart and about any organ. We must protect our birth right to breathe. This is NOT negotiable. FTBA is an agency designed to stop face mask orders from spreading nationwide and globally.

According to U.S. Attorney Martin, the false information is also being shared via “postings” and “flyers on the internet.” The DOJ also noted that they do not endorse the FTBA’s legal advice.

“U.S. Attorney Martin urges the public not to rely on the information contained in these postings and flyers and to visit http://www.ADA.gov for official information about the Americans with Disabilities Act,” the DOJ statement says.

Wrongful use of government seals can be a federal crime.

Law&Crime reached out to the email address contained on the FTBA’s since-lapsed website but no response was forthcoming at the time of publication.