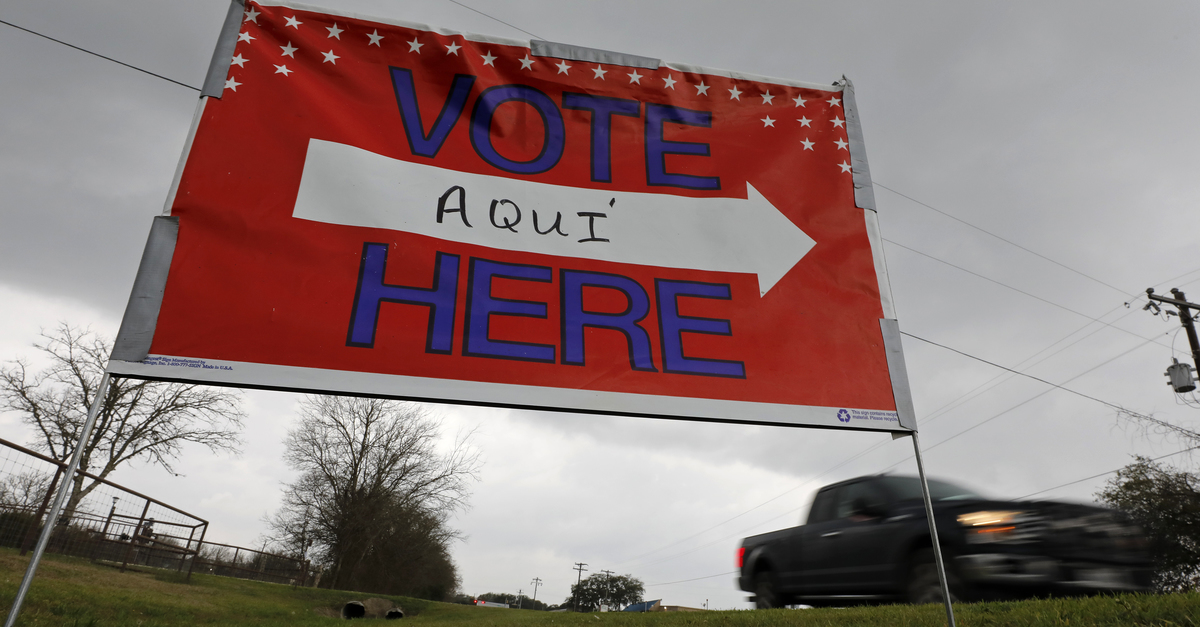 A Texas appeals court sided with the Democratic Party and a group of individual voters on Thursday in a ruling that would drastically expand the availability of mail-in voting–at least for the time being.

In a 2-1 decision, the Houston-based Court of Appeals for the Fourteenth Judicial District left intact a temporary injunction originally put into place last month by Austin-based District Judge Tim Sulak.

The lower court’s order liberally interprets a section of the Texas Election Code which allows residents to cast ballots by mail if they have “a sickness or physical condition that prevents the voter from appearing at the polling place on election day.” Sulak’s injunction was specifically keyed toward providing greater vote-by-mail access amidst the ongoing novel Coronavirus (COVID-19) pandemic.

The appeals court did not rule on or consider the merits of that decision, however, and simply allowed for the injunction to stand while the case makes its way through the legal system.

“We conclude that under the circumstances presented here, where appellees allege irreparable harm, under the binding authority of the Austin Court, we must exercise our inherent authority,” the appeals court ruling notes. “We conclude that such a temporary order is necessary in this case to preserve the parties’ rights. Accordingly, we grant appellees’ motion for temporary orders under [the relevant rule of appellate procedure] and order that the trial court’s temporary injunction remains in effect until disposition of this appeal.”

The upshot of the order is that Sulak’s ruling will stand while Texas Attorney General Ken Paxton seeks to overturn the decision on appeal. A hearing has not yet been scheduled over the actual arguments and legal issues in the pitched battle between voting rights advocates and the Lone Star State’s ruling Republican Party.

Paxton previously filed a fiery 75-page brief arguing against the temporary injunction by claiming that Sulak had misinterpreted Texas law and, in the process, run afoul of the separation of powers.

“The [lower court’s] order is entirely untethered to the language passed by the Legislature,” the prior filing argued. “It is unbounded in time or location. It eschews the deference due to the political branches in this type of crisis. And it cannot be allowed to stand.”

The legal controversy began when a group of voters sued the Travis County Clerk and the Texas Secretary of State–who was immediately removed from the lawsuit–seeking a declaration interpreting the Texas Election Code in favor of expanded vote-by-mail access. The plaintiffs, quickly joined by voting rights boosters and Democratic Party organizations, claimed that all Texas voters have a sickness or physical condition that prevents them from accessing polling locations during any 2020 elections due to the ongoing pandemic.

Paxton’s office intervened in an effort to shut down that train of thought. He argued that there is no constitutional right to vote by mail. But since Paxton’s own decision to interfere in the originally local dispute had legally roped the State of Texas back into the matter, the plaintiffs asked for the injunction to apply to the entire state. Judge Sulak ruled against the State of Texas, expanded access, and prohibited officials from denying the provision of a mail-in ballot to any voter who fears contracting the Coronavirus.

There’s also a substantially similar lawsuit making its way through the federal court system. It contains the exact same plaintiffs asking for essentially the same relief. On Wednesday, a group of third-party intervenors accused Paxton and Texas Governor Greg Abbott of using “illegal and unconstitutional” methods to prevent “younger” and “minority” voters from voting during the pandemic.

“[Paxton and Abbott] have improperly sought to restrict access to absentee ballots in the midst of a pandemic, using an unduly narrow vote-by-mail policy coupled with threats of criminal prosecution, to force voters to choose between jeopardizing their health by voting in person or not voting at all,” the Wednesday intervenor filing begins. “This practice unduly burdens the right to vote, and that burden falls disproportionately on minority voters. At the same time, Defendants have made absentee ballots freely available to anyone age 65 or older, thus discriminating against younger voters.”

A formal complaint accusing Paxton of felony election fraud was filed against Paxton over that threat earlier this week.

[image via Edward A. Ornelas/Getty Images]