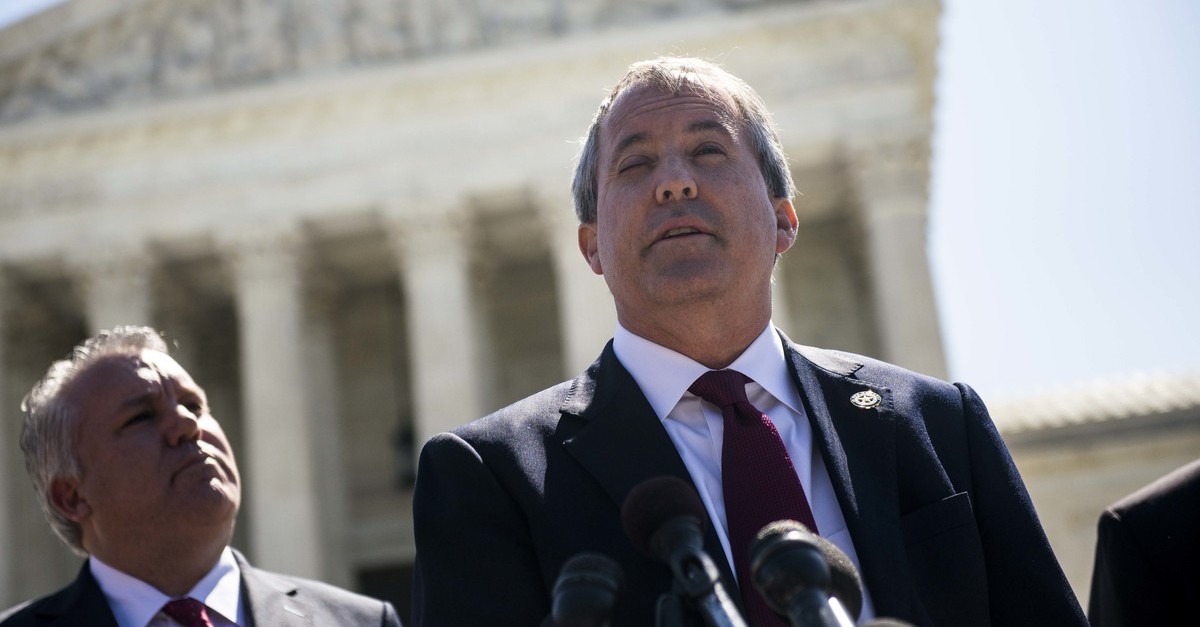 Texas Attorney General Ken Paxton is threatening voters and voting rights groups with felony charges if they request mail-in ballots due to fears of the novel Coronavirus (COVID-19) pandemic.

“Fear of contracting Covid-19 unaccompanied by a qualifying sickness or physical condition does not constitute a disability under the Election Code for purposes of receiving a ballot by mail,” Deputy Attorney General for Legal Counsel Ryan Vassar wrote in an advisory opinion addressed to the Lone Star State legislature on Wednesday.

“To the extent that third parties advise voters to apply for a mail-in ballot based solely on fear of contracting Covid-19, such activity could subject those third parties to criminal sanctions,” the letter dated April 14, 2020, continues. “However, whether specific activity constitutes an offense under these provisions will depend upon the facts and circumstances of each individual case.”

Paxton’s shot across the bow to voting rights groups advocating the use of absentee ballots for voters who fear contracting the deadly virus highlighted two specific prongs of the Texas Election Code as likely potential sources of criminal charges.

The first, § 84.0041, relates to the “Fraudulent Use of Application for Ballot by Mail” and violations of the law are punishable as state jail felonies. The second section highlighted in the controversial legal opinion, § 276.013, the state’s general “Election Fraud” law, is technically a Class A misdemeanor but has several qualifying sections which can easily increase penalties for violations to felony charges.

It’s clear, however, that Paxton’s admonition to would-be absentee voters in Texas and organizations coalescing around the nascent national push for vote-by-mail are being threatened with two separate felony charges because the penalty enhancement in the general election fraud statute also applies to anyone who commits “another offense under [the Election Code] in the same election.”

The advisory opinion was spurred on by a request from the Texas House Committee on Elections.

Addressed to Chair Rep. Stephanie Klick (R), the three-page letter purports to tightly interpret the Texas Election Code’s guidelines on when voters are allowed “access to early voting by mail.”

“You have asked us for guidance on whether a qualified voter who wishes to avoid voting in-person because the voter fears contracting COVID-19 may claim a disability entitling the voter to receive a ballot by mail regardless of whether the voter would need personal assistance to vote in-person or risk injuring their health because of a sickness or physical condition,” the letter to Klick begins.

The sticking point, per Paxton and Vassar, is the definition of “disability” under state law as it relates to a request for an absentee ballot.

“We conclude that, based on the plain language of the relevant statutory text, fear of contracting COVID-19 unaccompanied by a qualifying sickness or physical condition does not constitute a disability under the Election Code for purposes of receiving a ballot by mail.”

The very end of the threat from the Texas AG’s office says, “Please note that as discussed above this response is not an official opinion of the Office of the Attorney General issued under section 402.042 of the Texas Government Code, nor is it an exhaustive memorandum of law; rather, it is an informal letter of legal advice offered for the purpose of general guidance.”

Paxton’s dire missive was publicized on the same day that a judge in Texas made an initial finding amenable to the idea of allowing all Texans to vote by mail in the upcoming general election. The status of that order, however, is far from clear or set in stone.

The American Civil Liberties Union quickly blasted out a press release heralding the judge’s decision. Minutes after that, however, the same judge appeared to have reversed their own guidance, according to ProPublica reporter Jessica Huseman.