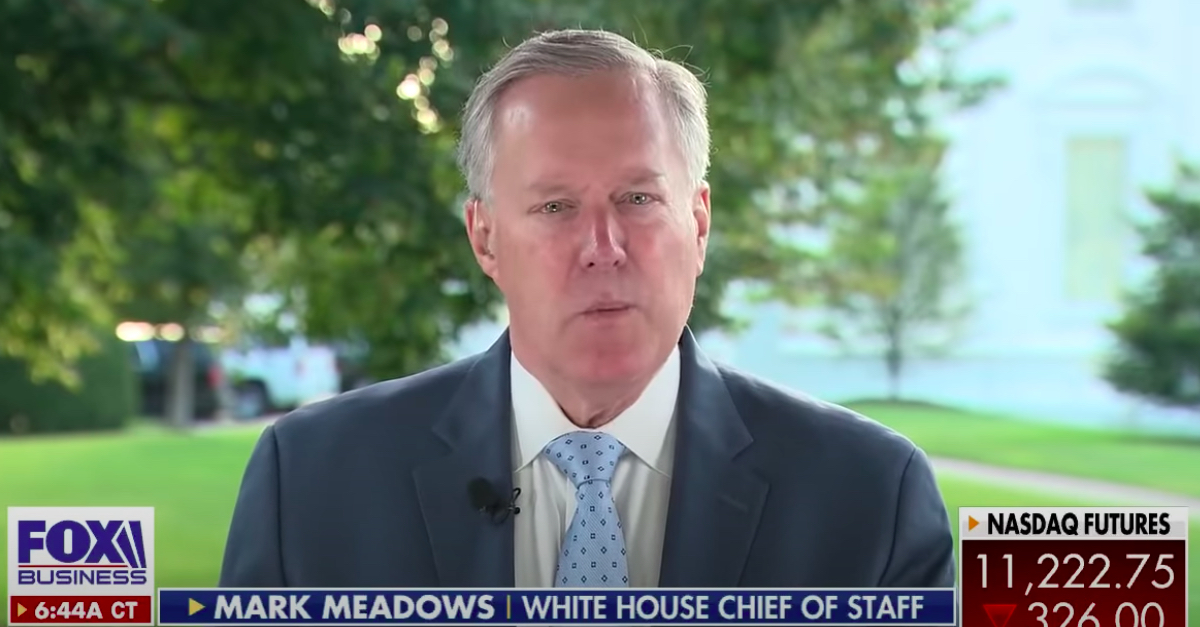 White House Chief of Staff Mark Meadows on Tuesday essentially reiterated the Justice Department’s assertion that President Donald Trump was lying when he told his followers that he had declassified “any and all” documents related to the federal government’s investigation of the “Russia Hoax.” In a declaration submitted in response to an order from a federal judge, Meadows said he spoke with Trump about the declassification tweets and confirmed that the president did not actually mean what he said.

“[O]n October 16, 2020, I conferred with the President concerning his intentions with respect to two statements he made on Twitter on October 6, 2020 relating to declassification,” read the statement. “The President indicated to me that his statements on Twitter were not self-executing declassification orders and do not require the declassification or release of any particular documents, including the FD-302 reports of witness interviews prepared by the Federal Bureau of Investigation in connection with the investigation conducted by Special Counsel Robert Mueller III.”

“Instead, the President’s statements related to the authorization he had provided the Attorney General to declassify documents as part of his ongoing review of intelligence activities relating to the 2016 Presidential election and certain related matters,” Meadows said.

Meadows’s declaration came in response to an emergency motion filed by BuzzFeed News journalist Jason Leopold, who sought completely unredacted portions of the Mueller Report and FBI witness interview materials (302s). Attorneys from the DOJ insisted that the president had given a blanket declassification order, despite tweeting that he had authorized the “total declassification” (i.e., “no redactions”) of “any and all” documents pertaining to the “Russia Hoax.”

“I have fully authorized the total Declassification of any & all documents pertaining to the single greatest political CRIME in American History, the Russia Hoax. Likewise, the Hillary Clinton Email Scandal. No redactions!” Trump tweeted.

Less than an hour later, Trump tweeted about the subject again: “All Russia Hoax Scandal information was Declassified by me long ago. Unfortunately for our Country, people have acted very slowly, especially since it is perhaps the biggest political crime in the history of our Country. Act!!!”

After requiring the DOJ to weigh in on the president’s statements, Senior U.S. District Judge Reggie Walton, a George W. Bush appointee, then ordered the DOJ to “confer with the White House in order to advise the Court as to the White House’s official position regarding declassification and release to the public of information related to the Russia investigation.”

Meadows and the DOJ have all been placed in the awkward position of having to tell Judge Walton that Trump was not telling the truth about wielding his presidential authority by tweet.

“The Court cannot infer that any such sweeping order exists based on the President’s Twitter statements because they merely suggest that the President ‘authorized’ the ‘declassification’ of unspecified information,” the DOJ wrote in court documents submitted six days ago. “The Twitter statements do not refer to any specific document and do not indicate that the President was exercising his Constitutional authority to declassify specific information. They were not an order to declassify particular material.”

Walton is the federal judge who called out Attorney General Bill Barr for “distort[ing]” the Robert Mueller’s findings in a public statement that preceded the release of the Mueller report. Because Barr “lacked candor” on the matter, Walton ordered the DOJ to submit the full Mueller Report under seal so that he could review redactions in his chambers.

Walton read the entire Mueller report and ordered the DOJ to answer a spreadsheet full of questions about the report’s publicly hidden contents. The judge eventually found that the DOJ improperly redacted sections of the Mueller report pursuant to the deliberative process privilege contained in Exemption 5 of FOIA, and ordered that information released before the election. At the same time, Walton found DOJ redactions of FBI 302s fell within legal exemptions to the department’s obligations under FOIA.

Meadows’ Statement on Declassification by Law&Crime on Scribd