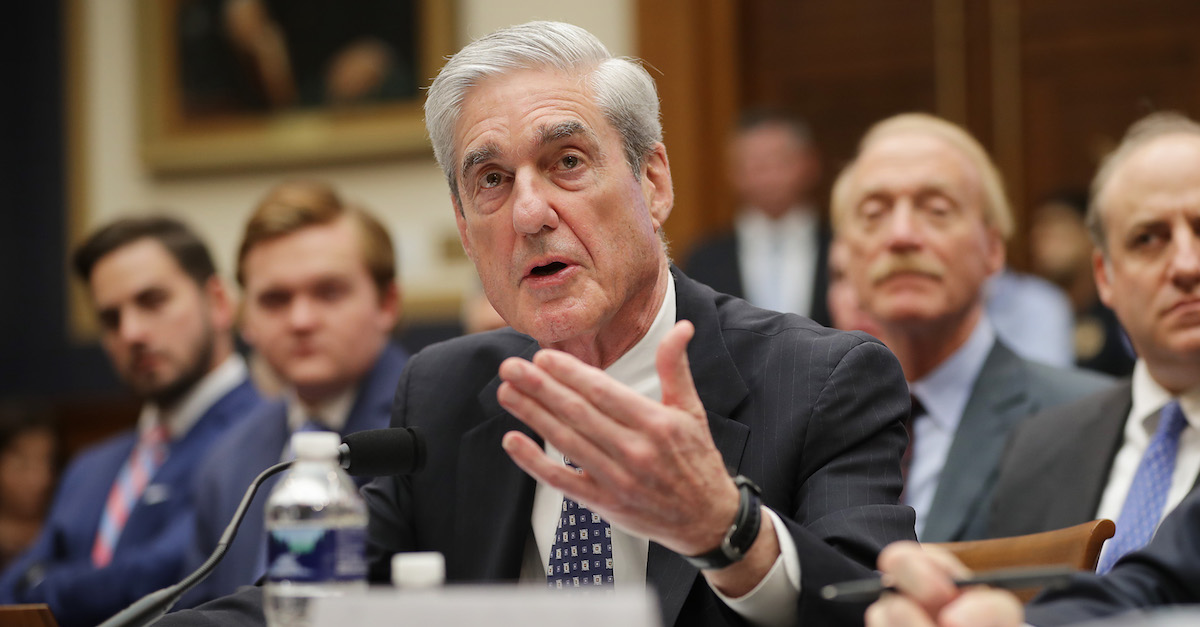 A federal judge sided with the Trump administration on Thursday in a lawsuit challenging the Justice Department’s redactions of former special counsel Robert Mueller’s investigation of Russian meddling in the 2016 presidential election and obstruction of justice. Senior U.S. District Judge Reggie Walton, who previously read the entire Mueller report as part of a related case probing DOJ redactions, granted the administration’s request for summary judgment. Walton reasoned that DOJ redactions of FBI reports of witness interviews (302s) fell within legal exemptions to the department’s obligations under the Freedom of Information Act (FOIA).

The consolidated lawsuit stemmed from a series of FOIA requests from multiple media outlets including Buzzfeed and CNN. The plaintiffs challenged redactions of memos and 302 reports produced by the FBI relating to any and all of the witnesses interviewed by Mueller’s team. Per Politico:

Walton has ordered monthly releases of the FBI’s so-called “302” reports on roughly 500 witness interviews, but both news outlets complained that the redactions from those releases were excessive and legally unjustified. Lawyers for BuzzFeed and CNN also argued that the government should not be able to withhold portions of the records in order to obscure serious government misconduct.

The DOJ previously produced an annotated version of the Mueller report identifying the specific FOIA exemptions that the agency was relying on in withholding the requested information, mainly citing to 5 U.S.C. § 552(b)(5), better known as “Exemption 5.” Exemption 5 is extremely broad and essentially protects against the production of records deemed to be either the product of attorney work or presidential communications records which, if disclosed, may inhibit the candid exchange of views deemed necessary for the government to pursue effective decision-making processes.

Despite previously coming down hard on Attorney General William Barr for having “distorted” the findings of the redacted Mueller report, Judge Walton agreed with the administration on the legality of certain redactions. Walton first addressed the department’s invocation of attorney work product privilege, writing that the information withheld from the 302 reports fell “squarely within the scope of the privilege.”

Plaintiffs had claimed that even if the information was covered by the privilege, it still had to be disclosed because it was evidence of “extreme governmental misconduct.” Walton rejected the argument, reasoning that the exemptions did not constitute wrongdoing.

“None of his atmospheric claims of wrongdoing calls into question the propriety of any individual withheld record,” Walton wrote. “The plaintiffs have failed to produce any evidence showing ‘that the [Department] [handling its] FOIA request is engaged in illegal activity,’ or ‘unprofessional behavior [on the part of the Department’s lawyers that] [would] vitiate the work product privilege,’. Lacking any such evidence of misconduct on the part of the Department, the plaintiffs’ argument must be rejected.”

Walton had a similar reasoning for accepting the administration’s invocation of the presidential communications privilege, which plaintiffs alleged was being systematically abused to withhold any information viewed as politically damaging to the president.

“[W]hile the plaintiffs’ position is understandable, under the current state of the law, they have failed to provide the Court with sufficient evidence that calls into question the Department’s redactions in this case. Therefore, the plaintiffs’ argument is not supported by the record or existing law on the subject,” Walton wrote. “The Department’s declaration is sufficiently specific for the Court to conclude that the Department has appropriately withheld information pursuant to the presidential communications privilege because, as the Department represents, the withheld information describes communications concerning ‘possible official public statements[] [that] the President personally participated in developing or was anticipated to participate in developing.’”

Walton, a George W. Bush appointee, is also presiding over a lawsuit filed by the Electronic Privacy Information Center (EPIC) and BuzzFeed. Back in June, Walton ordered the DOJ to answer his questions “regarding certain redactions of the Mueller Report” at an ex parte (one party only) hearing. The order came down after Judge Walton reviewed the full Mueller report in his chambers.

“Having reviewed the unredacted version of the Mueller Report, the Court cannot assess the merits of certain redactions without further representations from the Department,” Walton said.