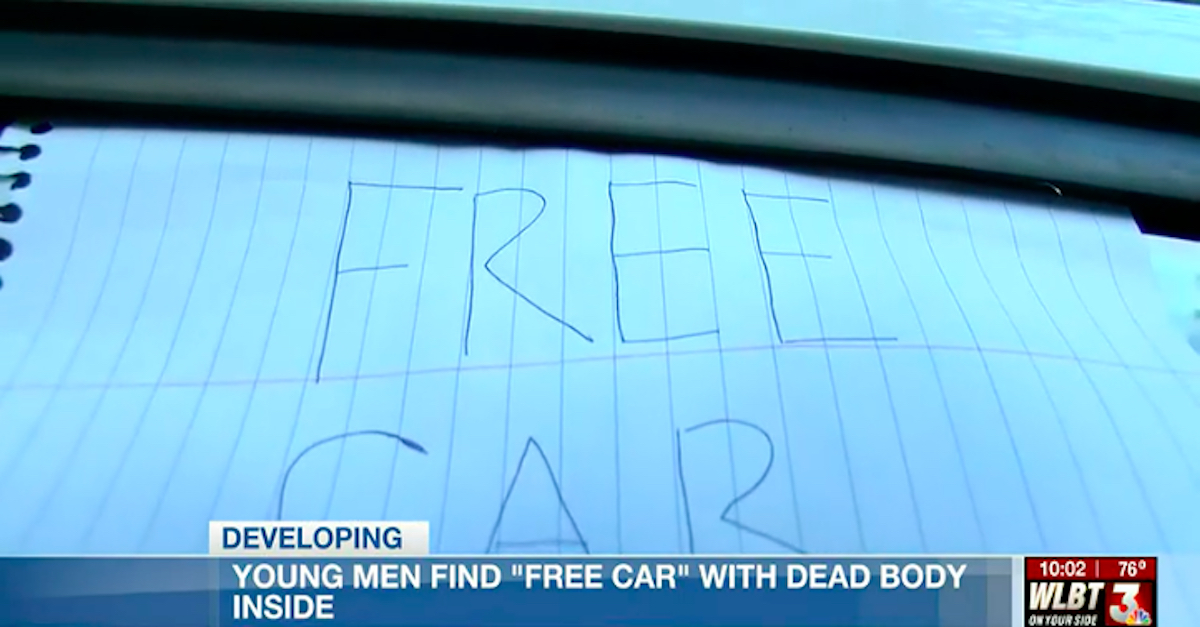 When two men in Mississippi came across a vehicle with the keys in the ignition and a sign reading “free car,” they jumped in and drove it to the home of one of their family members. But police say their free ride took a turn for the worse when they arrived at their destination and took a closer look at the vehicle, discovering that a naked corpse had been stuffed in the trunk.

According to a report from local NBC-affiliated news station WLBT-TV, police say the men found the car abandoned in the city of Byram and drove it—dead body and all—more than 20 miles to Copiah County before they realized they were transporting human remains.

Copiah County Sheriff Byron Swilley on Sunday said the body found in the car has been identified as 34-year-old Anthony Mccrillis. County Coroner Ellis Stuart said the body had been in the car for multiple days and was discovered without any clothing.

“He was identified through his tattoos and confirmed through his immediate family of his identity,” Byram Police Chief David Errington told the station. He said Mccrillis’ body did not present any obvious signs of trauma.

Errington added that the vehicle, which belonged to the victim, had reportedly been spotted in Byram, Copiah County, and Jackson over the last several days.

An officer first reported seeing Mccrillis’ car parked on the side of Old Byram road Saturday morning at approximately 9:30 a.m.

“It stayed there all day long for sure until 6 p.m.,” Errington said. “Saturday night, it was still seen by another employee from the junkyard.”

Errington said that investigators with the department were able to determine that Mccrillis was alive on Friday evening at approximately 9 p.m. when he was captured on home surveillance camera footage.

According to WLBT, the junkyard Errington referred to is called Starz Auto Sales. Dan Peacock, the manager of Starz, spoke to the station and said he saw the car on Saturday, passing by it multiple times, but that it was gone by Sunday.

Errington said that the Byram Police Department is currently taking the lead in the investigation until a final determination is made regarding jurisdiction.

Authorities are not certain where the original crime took place. Errington said that investigators will process the car for evidence and an autopsy will be performed on Mccrillis to determine his cause of death.