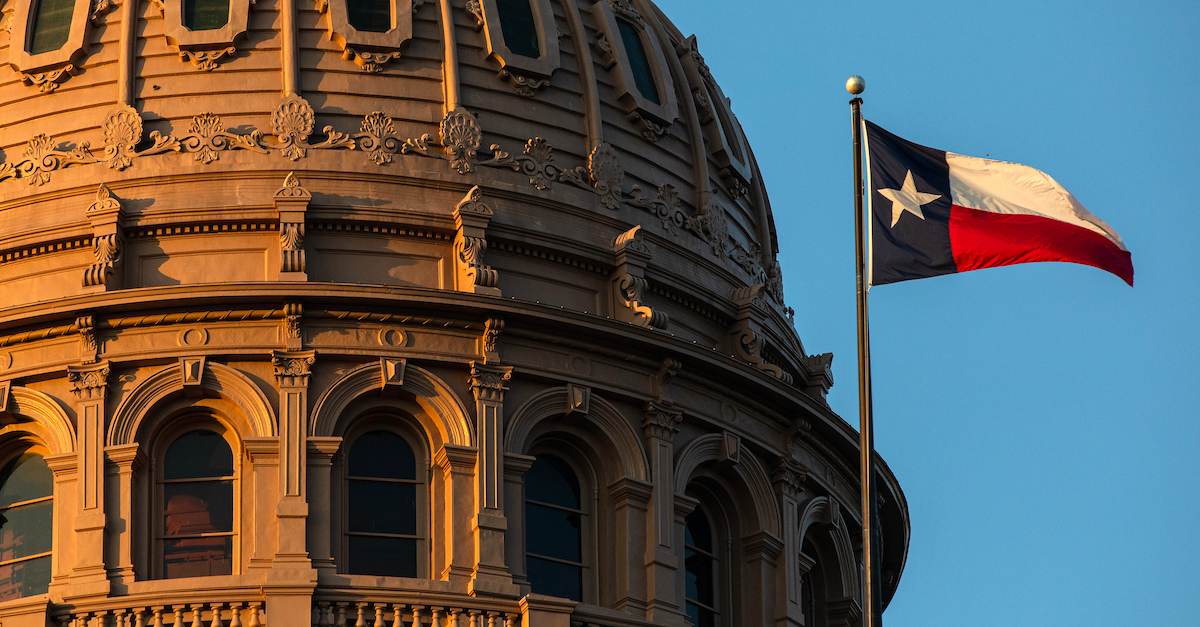 The Texas State Capitol is seen on the first day of the 87th Legislature’s third special session on September 20, 2021 in Austin, Texas.

One of the plaintiffs who recently sued an abortion doctor under a new Texas law has now moved to intervene in a lawsuit filed against the Lone Star State by the U.S. Department of Justice. Through a four-page motion, Oscar Stilley implores a federal district court judge to acknowledge his “authority” to sue Dr. Alan Braid under Texas S.B. 8, also known as the “Texas Heartbeat Act.”  S.B. 8 took effect in September after the U.S. Supreme Court refused to block it. Stilley argues that the law gives him “property rights” that the federal government is trying to take away.

In an opinion piece for the Washington Post, Dr. Braid announced that he had ended a pregnancy in violation of S.B. 8 — though his article largely warned that he watched “teenagers die from illegal abortions” prior to Roe v. Wade. Braid’s piece, in essence, egged S.B. 8 plaintiffs into filing litigation against him under the new Texas law that created a legal pathway for any private individual to sue any doctor who performed any abortion anywhere in the state after embryonic cardiac activity became detectable — usually about six weeks into pregnancy.

Another plaintiff separately sued Braid under S.B. 8 in an attempt to hasten the demise of the constitutionally questionable Texas law.

Stilley, of Arkansas, told a federal judge that he “thus far invested the sum of $295.29” while pressing his S.B. 8 claim in a Texas state court. He also said he “plans future litigation against various defendants not yet known, should all or part of SB8 be declared constitutional.”

Stilley wishes to intervene for the protection of his legal and property rights under SB8.

If intervention is granted, Stilley plans to present only those non-frivolous arguments in favor of SB8 that would tend to show that SB8, or part thereof, is constitutional and legally valid.

“It . . . appears that said intervenors might hope that the Court will engage in a de facto redrafting the language of SB8, in order to save something out of the law,” Stilley stated. He expressed a desire to know precisely what the intervenors and/or Texas Right to Life planned to salvage from S.B. 8 and whether they have any “legal authority . . . suggesting that courts, as a general rule, have the power to redraft a statute to save part of it.”

Stilley then admitted to the federal judge overseeing U.S. v. Texas that he (Stilley) is “in federal custody, on home confinement” and asked that any “court appearances, if necessary” be “allowed via Zoom videoconferencing.”

In his original S.B. 8 lawsuit against Dr. Braid, Stilley described himself as a “disbarred and disgraced former Arkansas lawyer” who was in the process of serving 15 years “on utterly fraudulent federal charges of ‘tax evasion’ and ‘conspiracy,’ all of which repeatedly changed and morphed away from the purported grand jury indictment, to whatever new theory the government chose to espouse at a given time.”

A judge has not ruled on whether or not Stilley will be able to join the current federal lawsuit filed by the DOJ against Texas. The federal government seeks to challenge S.B. 8 because “[i]t is settled constitutional law that ‘a State may not prohibit any woman from making the ultimate decision to terminate her pregnancy before viability,'” the DOJ stressed in its opening salvo.

As Stilley mentioned, a series of other intervenors filed separate attempts to inject themselves into the federal-government-versus-state-government case earlier in the week.

Those intervenors — Erick Graham, Jeff Tuley, and Mistie Sharp — filed affidavits which declare that they have “no intention of suing any abortion provider.”  Rather, their individual litigation tactics are aimed at others, such as employers, insurance companies, municipalities, and other entities “if they pay for or reimburse the costs of a post-heartbeat abortion.”  Those entities, in the eyes of the earlier intervenors, are engaged in conduct “clearly unprotected by the Constitution” and “cannot plausibly assert an ‘undue burden’ defense” under existing law and U.S. Supreme Court precedent.

The actual motion to intervene from the three original intervenors explains their legal postures at length (citations omitted):

The United States is attempting to deprive Mr. Graham, Mr. Tuley, and Ms. Sharp (as well as countless others) of their state-law right to bring private civil-enforcement suits against individuals and entities that violate the Texas Heartbeat Act. And it is seeking to prevent them from bringing any civil-enforcement lawsuits under Senate Bill 8, even when they sue over conduct that is clearly unprotected by the Constitution. The categorical, across-the-board injunction that the United States is seeking defies the severability requirements in Senate Bill 8, which instruct this Court to sever and preserve every constitutional provision and every constitutional application of the statute. Mr. Graham, Mr. Tuley, and Ms. Sharp seek intervention to preserve their state law rights and to ensure that Senate Bill 8’s severability requirements are observed and enforced.

The Graham/Tuley/Sharp motion to intervene then explains who and what each intervenor hopes to challenge (again, citations omitted):

Mr. Graham, for example, intends to sue only employers and insurance companies that provide or arrange for coverage of abortions that violate Senate Bill 8. Mr. Graham also intends to sue the city of Austin if it uses taxpayer money to subsidize the provision of post-heartbeat abortions performed in Austin, as it was doing before the Heartbeat Act took effect. Mr. Graham has focused on these entities because the Supreme Court has made clear that there is no constitutional right to taxpayer subsidies or private insurance coverage of abortion, so there is no possible argument that any of Mr. Graham’s intended lawsuits would violate the Constitution or anyone’s constitutional rights.

And, elsewhere, as to Tuley:

Mr. Tuley intends to sue only individuals or entities that perform or assist abortions that are clearly unprotected under existing Supreme Court doctrine, which include: (a) non-physician abortions; (b) self-administered abortions; and (c) post-viability abortions that are not necessary to preserve the life or health on the mother. Mr. Tuley has decided to target these individuals and entities because the Supreme Court has made clear that there is no constitutional right to abortion in any of these scenarios, so there is no conceivable argument that any of those intended lawsuits would violate the Constitution or anyone’s constitutional rights.

And, as to Sharp:

Read the Graham/Tuley/Sharp motion to intervene below: