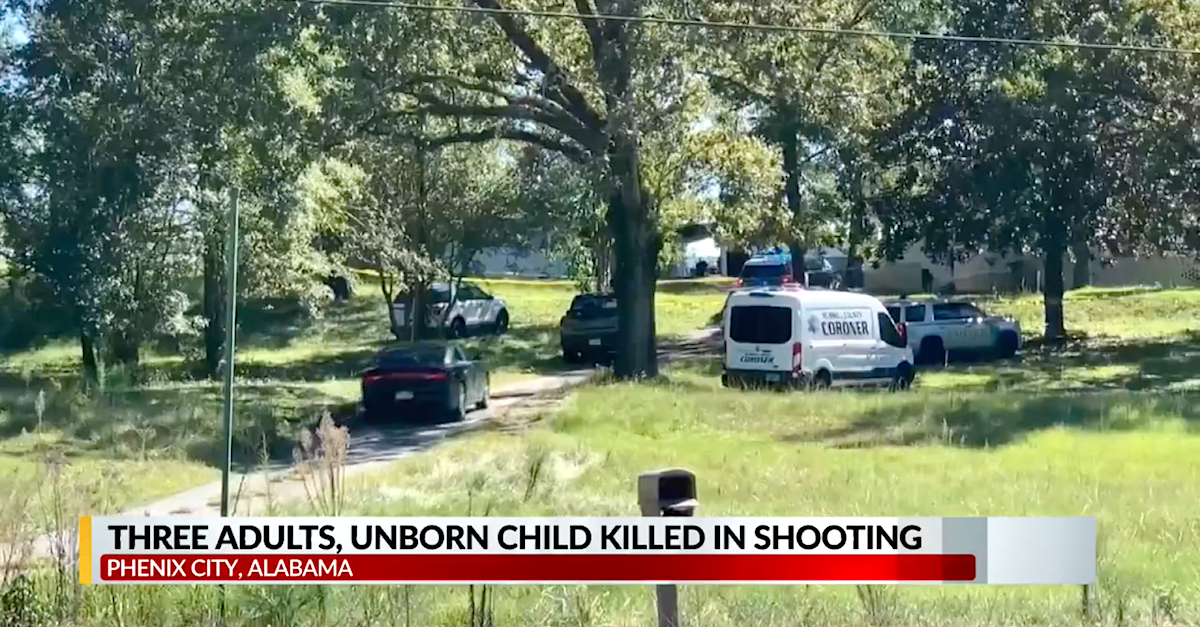 A television screengrab shows the scene in Phenix City, Alabama, where four people, including an unborn child, died in a murder-suicide.

A pregnant woman and her unborn child were among three victims gunned down by a man in Alabama who took his own life Friday.  Law enforcement authorities say an apparent domestic incident touched off the killing spree.  That’s according to reports from NBC affiliate WTVM-TV and CBS affiliate WRBL-TV.

According to the reports, Russel County Coroner Dr. Arthur Sumbry, Jr. confirmed that 35-year-old Jessica Martin, 40-year-old Richard Cook, and an infant child whose name was not released were fatally shot at a home located at the 3700 block of U.S. Highway 80 in Phenix City on Friday.  The infant appears to have been Martin’s unborn child.

Officers with the Phenix City Police Department responded to a call about a shooting at the residence Friday afternoon. First responders on the scene reported initially finding Cook deceased from what appeared to be multiple gunshot wounds. Jessica Martin was found next. She was alive but critically wounded. Emergency paramedics immediately transported her to Piedmont Columbus Regional Midtown Hospital where doctors and medical personnel attempted life-saving procedures, but she was pronounced dead shortly after arriving at the facility.

Medical teams also struggled to save the life of the baby Martin was carrying.

“An attempt to save the unborn child was made, but the child also was pronounced dead from a gunshot wound,” the department said in a press release concerning the incident.

Several witnesses in the area reported hearing gunshots and then seeing a male suspect flee form the scene. The man, later identified as 47-year-old Jeffrey Lynn Martin, reportedly ran into a wooded area near the house where the shooting took place.

Deputies with the Russell County Sheriff’s Department and agents with Alabama Law Enforcement Agency (ALEA) set up a perimeter around the wooded area. With the help of a tracking dog and helicopter aerial support, investigators were quickly able to locate Jeffrey Martin. He was found dead at a campsite in the woods — bringing the death count to four individuals including the unborn child. Law enforcement officers reported that Jeffrey Martin’s cause of death appeared to be a self-inflicted gunshot wound.

The department said it is continuing to investigate this incident and asked that anyone with information related to the investigation to please contact PCPD at 334-298-0611 or 334-448-2825.