Woman Who Said She Was Looking to ‘Find a Proud Boy’ on Jan. 6 Is Now Looking at Federal Charges 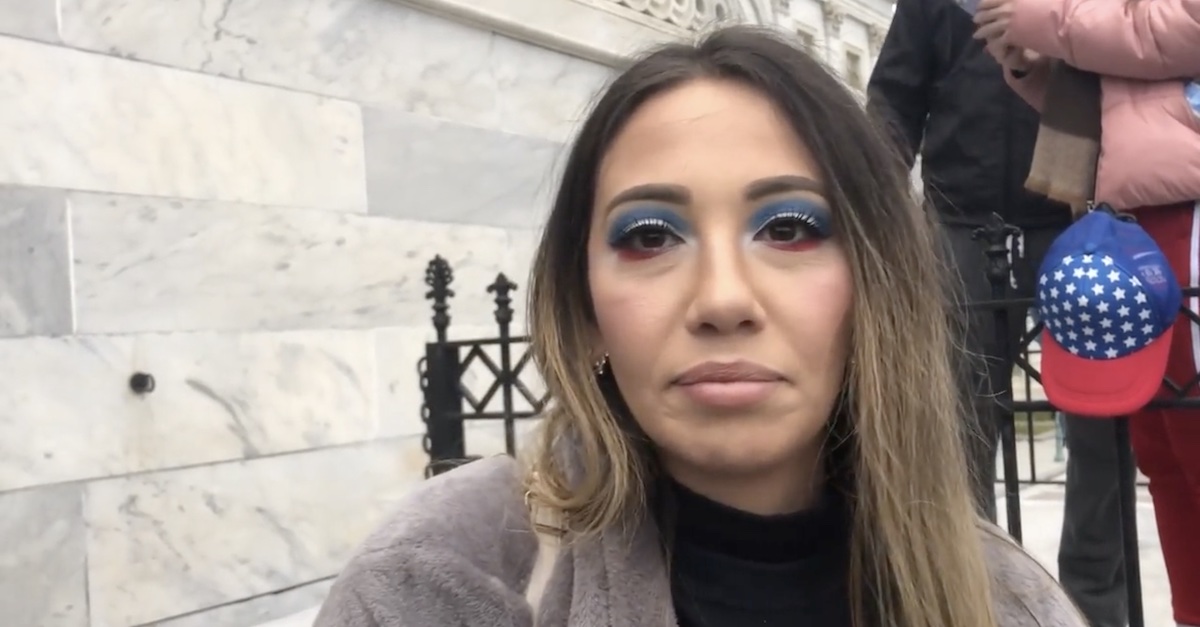 A 27-year-old California woman was arrested in Alabama on Friday in connection with siege of the U.S. Capitol, the Department of Justice said. The suspect was identified as Stephanie Baez in no small part because she was recorded on Jan. 6 providing her Instagram handle while declaring that she loves the Proud Boys and was hoping to “find a Proud Boy” that day. Although the odds of that coming to fruition were likely higher than usual, Baez has found a couple of federal charges instead.

According to the FBI, Baez is the individual seen inside the Capitol Crypt on Jan. 6 wearing a T-shirt with 1984 author George Orwell’s face on it and the words “Boy, did I call it or what?”

The FBI said that this very same individual was wearing the same attire in a selfie posted to the Instagram handle that she revealed in the aforementioned video. The FBI further said Baez admitted that she’s the woman in the pictures and that the Instagram account is hers. 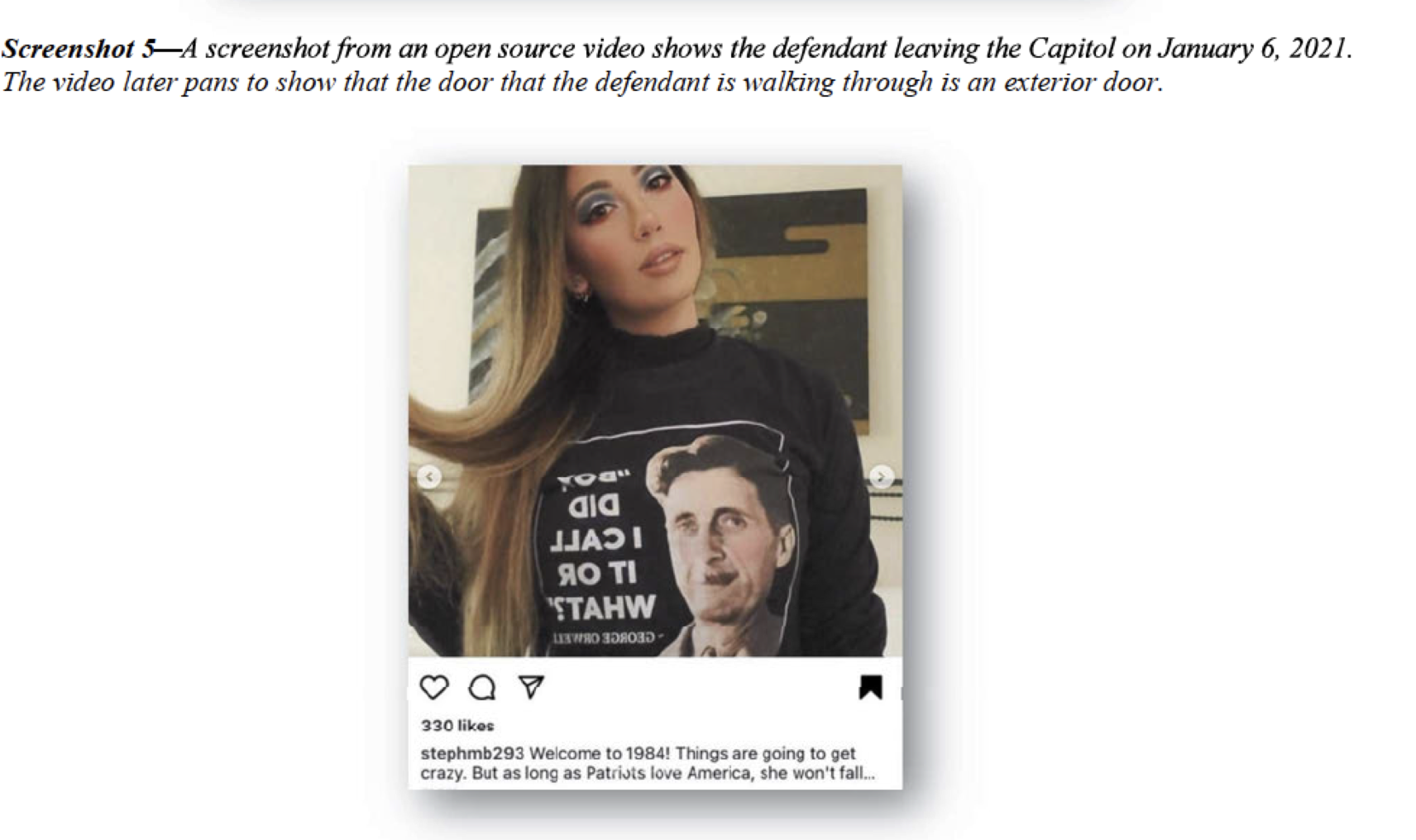 “Welcome to 1984! Things are going to get cray,” she wrote. “But as long as Patriots love America, she won’t fall.”

The feds said they interviewed Baez on April 27 and that she allegedly explained her presence inside the Capitol as seizing a tourism opportunity.

“The defendant further claimed that she had authority to be inside the Capitol because she had looked up the Capitol’s hours ahead of time and confirmed that the Capitol would be open so that she could tour it. She said her reason in looking up the Capitol was because it was so close to where Trump was speaking, and she was just checking out what else in the area that see while in Washington, D.C.,” the complaint said.

The complaint also includes a series of statements Baez allegedly made on Instagram. Let’s just say that some of these statements are being viewed as incriminating.

From here, there was 1) an admission to being tear gassed; 2) an attempt to downplay what Donald Trump supporters did on Jan. 6 because “blm/ANTIFA destroyed small businesses”; 3) a statement that Trump supporters were “pissed” and a suggestion that they might “try storming the Supreme Court” as well; 4) “Lol I’m acting like a reporter”; 5) a message saying “Welp time to get back and storm the building” after Congress was able to resume counting the Electoral College votes that Joe Biden won; a message on Jan. 13 saying people were “mad” because the “election was stolen,” but “Trump was an angel!” so there was no incitement—plus “Antifa was there 100%”. 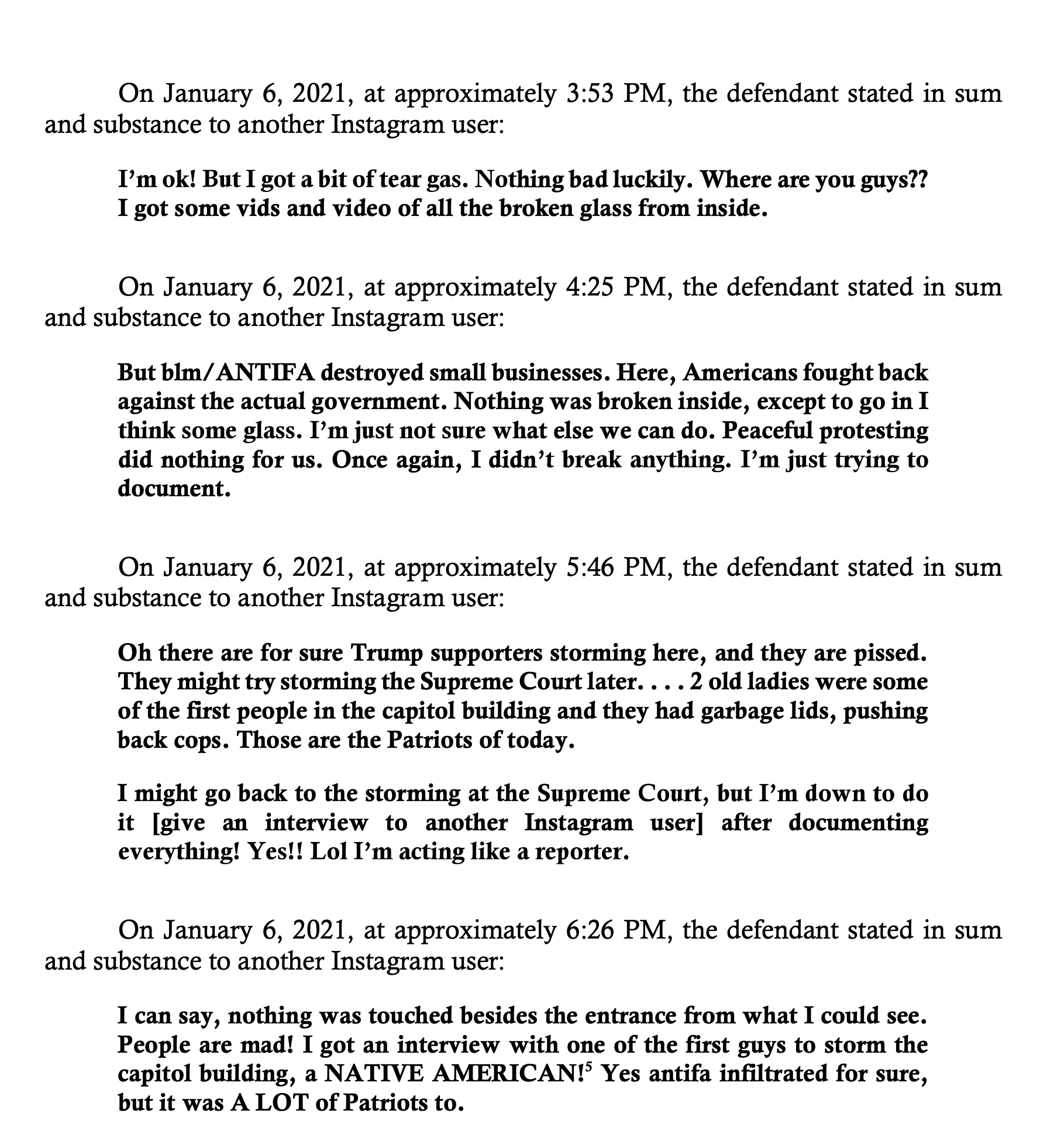 Baez now faces charges for Knowingly Entering or Remaining in any Restricted Building or Grounds Without Lawful Authority, and Violent Entry and Disorderly Conduct on Capitol Grounds.

Law&Crime reached out to see if Pierce had comment on his client’s behalf.

“Ms. Baez will be pleading not guilty. We intend to take the case to trial and seek a full acquittal,” Pierce said in an email.

Baez’s initial appearance in court was last Friday. The court docket shows that the government did not seek Baez’s detention. She was released on $10,000 bond with conditions and is scheduled to appear in court for a virtual hearing at 1 p.m. on Wednesday, June 9.