Proud Boy ‘Milkshake’ Caught ‘at the Front Lines’ of Jan. 6 Assault on Police Officers Is Under Arrest: FBI 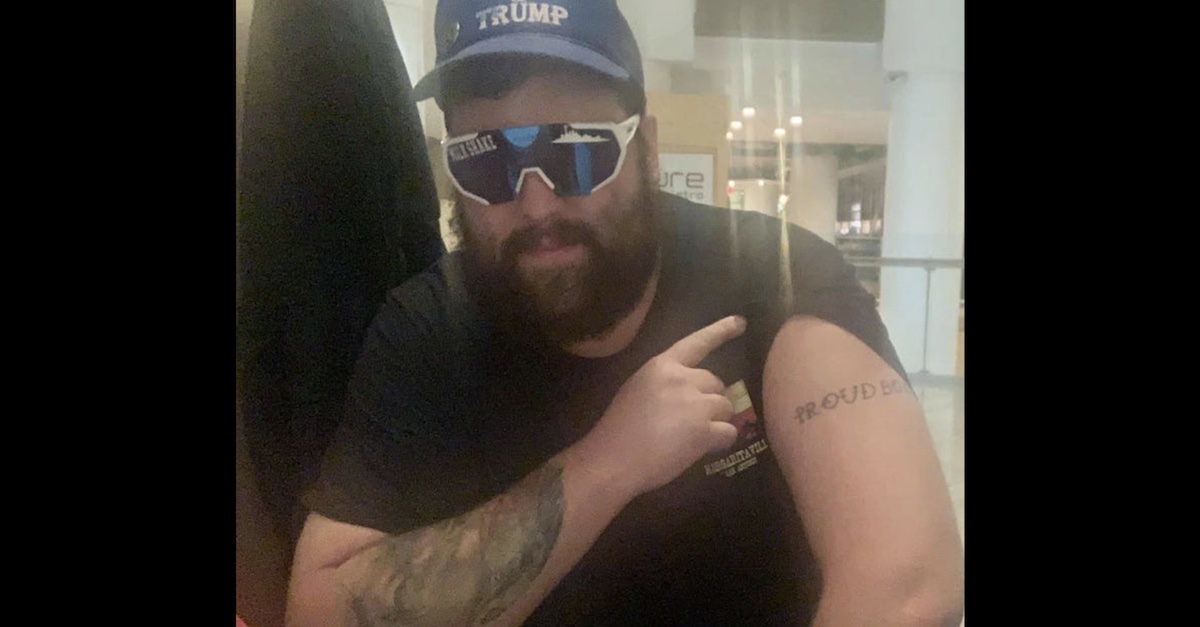 A Proud Boys member known as “Milkshake” who was called an “idiot” by a member of his own group for yelling “Let’s take the fucking Capitol” on Jan. 6 is now under arrest. Daniel Lyons Scott, a 28-year-old Florida man who said he has also lived in Seattle, was arrested in the Sunshine State on Thursday and made his initial court appearance in the afternoon.

The court docket shows that Scott was appointed defense attorney Che Lopardo pursuant to the Criminal Justice Act (“the CJA establishes a comprehensive system for appointing and compensating legal representation for accused persons who are financially unable to retain counsel in federal criminal proceedings”).

Charging documents say that Scott was “at the front lines” of an assault on police officers. The FBI said that the individual in the blue “God, Guns & Trump” hat wearing an olive-green jacket is “Milkshake.” 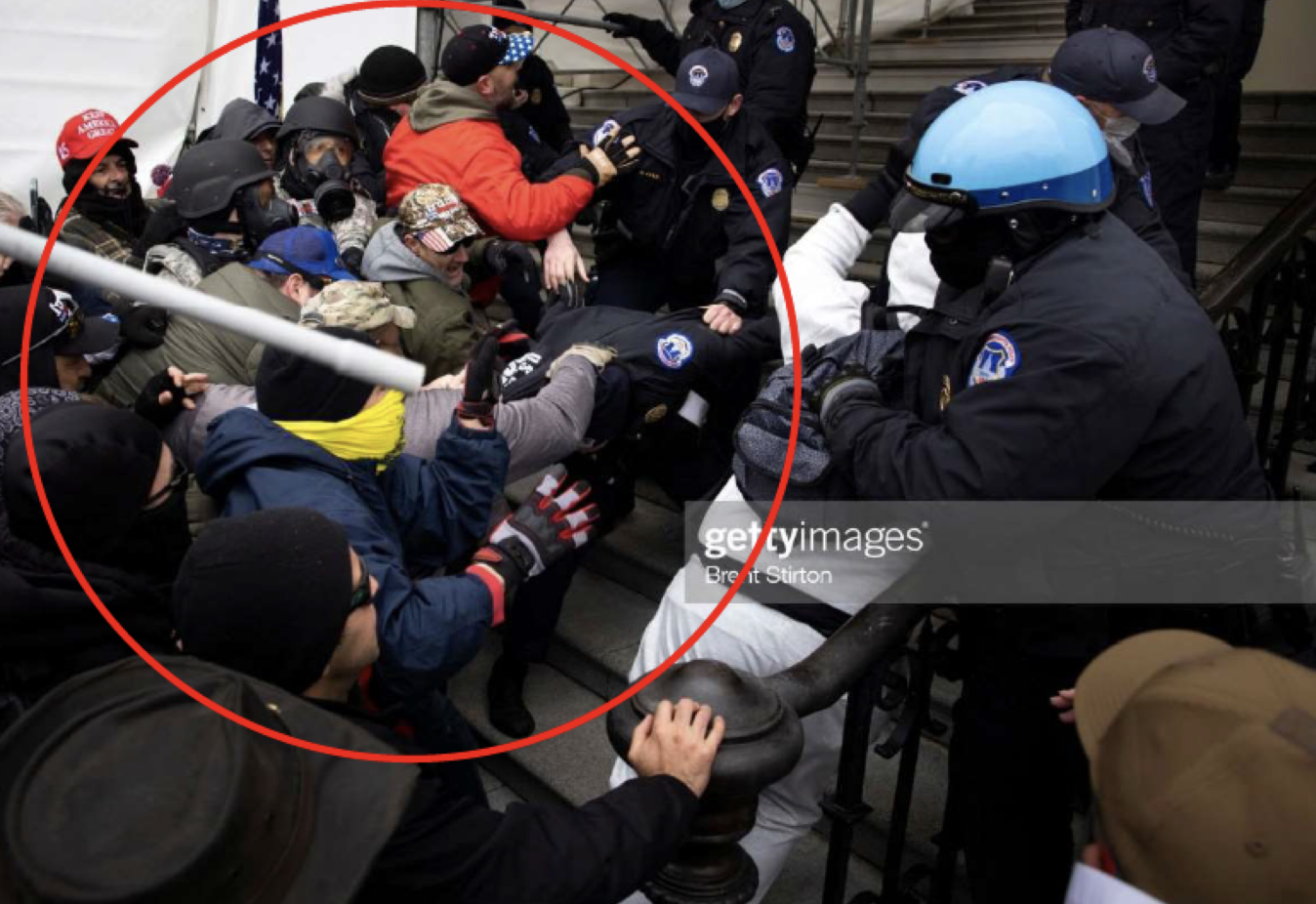 “SCOTT can be seen pushing two U.S. Capitol Police officers backward, up the steps. He appears to be one of the first, or perhaps the first, persons to initiate contact with law enforcement at this locations,” the documents say. “SCOTT then appears to pull one of the two officers into the crowd for approximately 3-4 seconds before another officer is able to pull the officer out of the crowd.”

For the purposes of establishing Scott’s identification, the government cited a number of news articles.

“On January 31, 2021, an online news publication posted an article titled ‘Arlington Proud Boy ‘Milkshake’ fought police at U.S. Capitol,” documents continue. “In that article were the following photographs of an individual that the article identified as ‘Daniel Lyons Scott.’ According to the author of the article, SCOTT had been quoted by the same publication in 2019 in an article about the Proud Boys organization.” 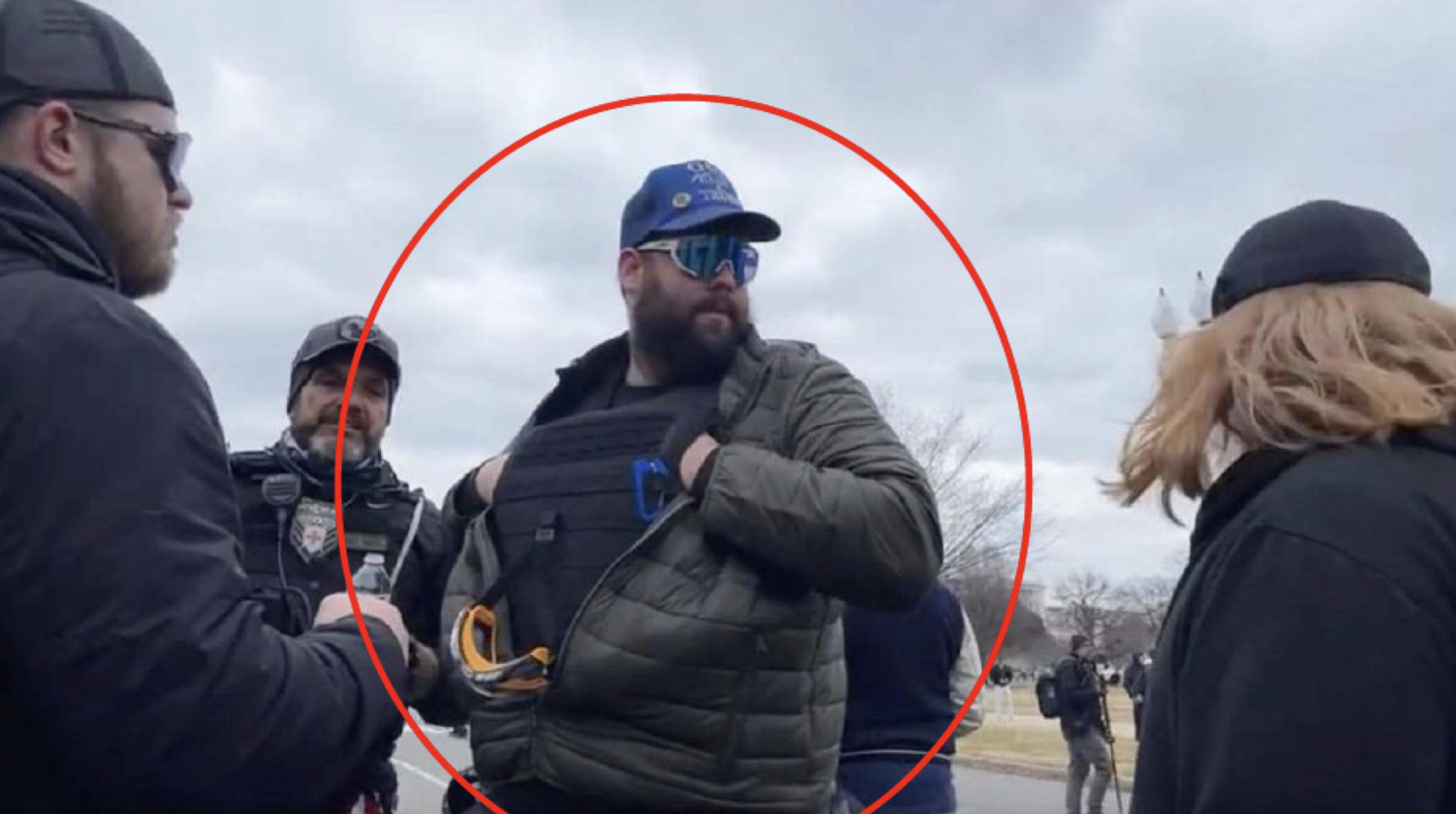 Daniel Lyons Scott (center) pictured next to fellow accused Capitol defendant Ethan Nordean (left). Nordean was the one who called “Milkshake” an “idiot” for yelling “Let’s take the fucking Capitol!”

The government also referred to a May 2020 Wonkette article headlined, “Proud Boys Tore Down A Covid-19 Memorial, Because Caring That People Died Is for Commies.”

In that story, Scott was pictured in a “black ballistic vest” that said “PROUD BOY” on it, displaying tattoos. 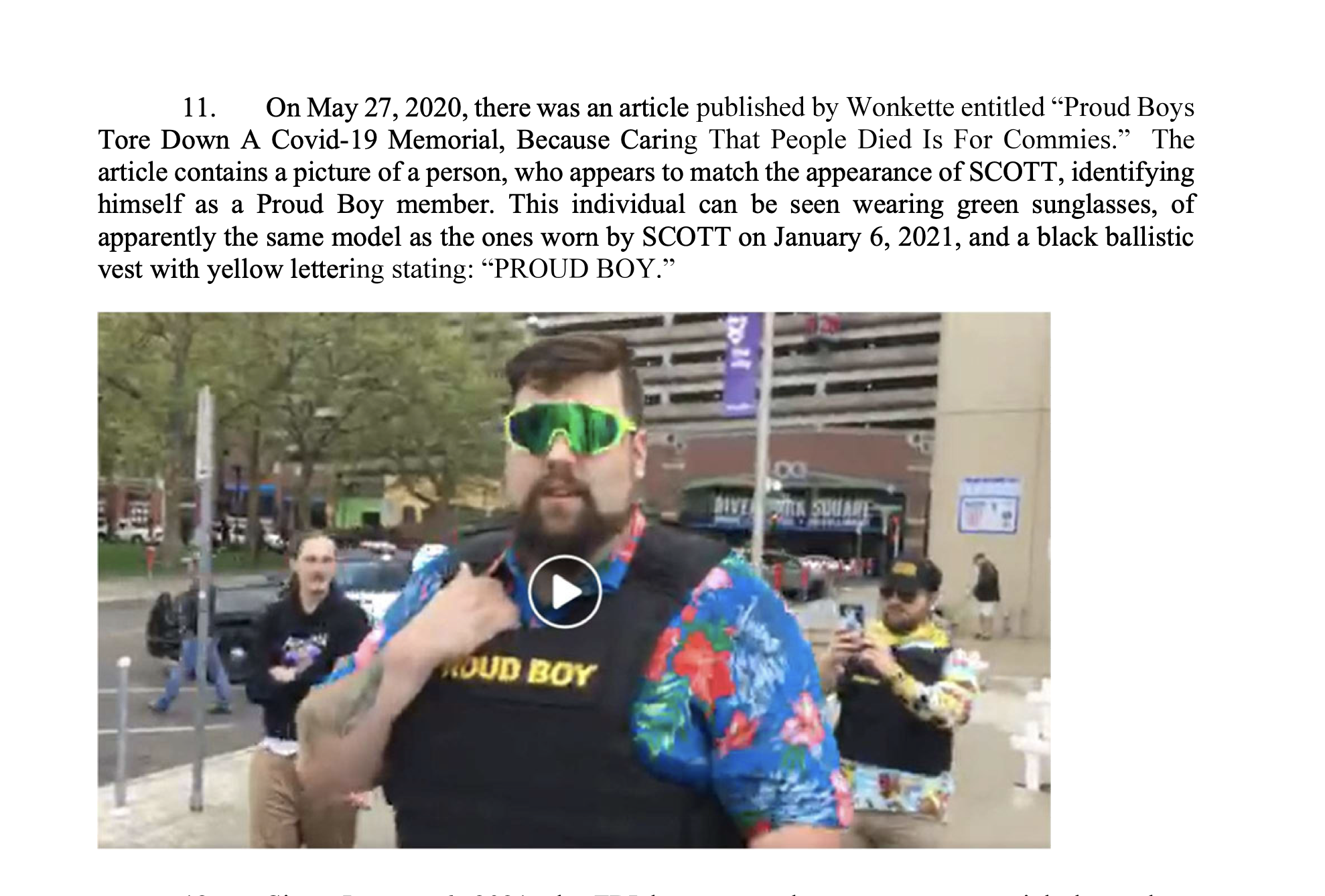 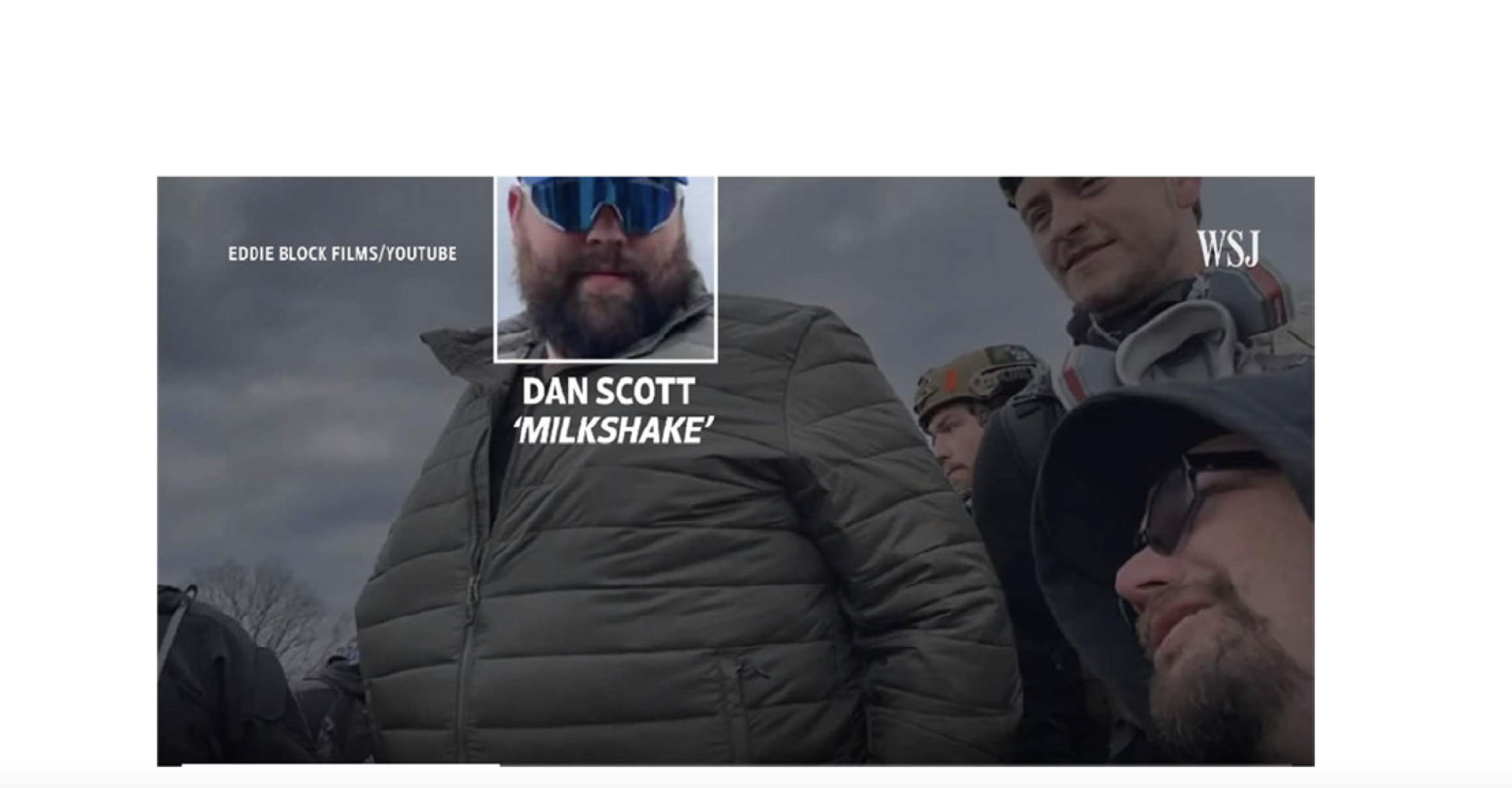 Beyond referring to news stories, the FBI said it interviewed two witnesses who know Scott. One of them confirmed Scott was in D.C. on Jan. 6. The other confirmed that Scott was the person in this picture: 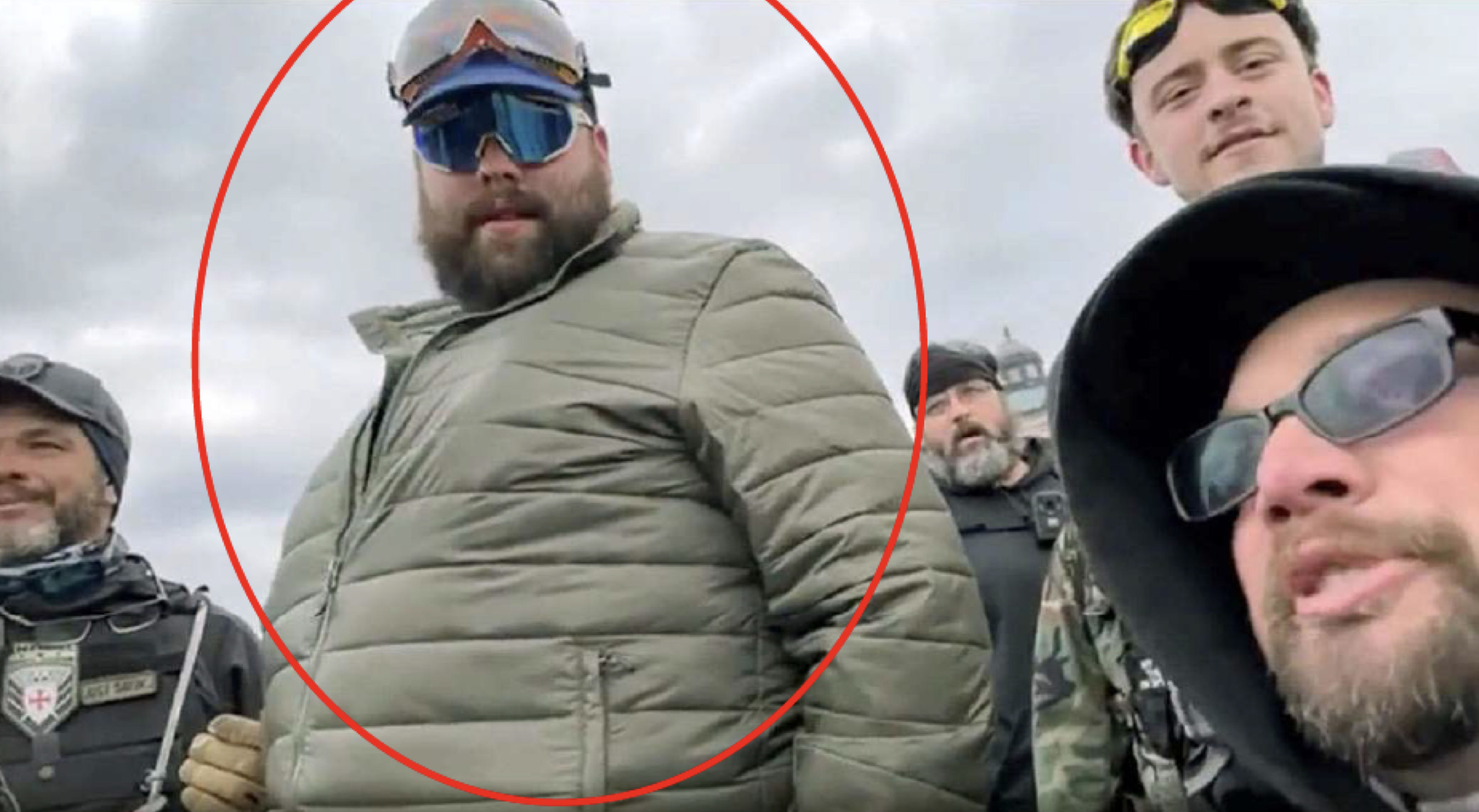 Witness-2 described Scott as “tall, hairy, overweight, and having a tattoo that reads ‘Proud Boy’ on his arm.”

The feds also included an image of Scott next to Christopher Worrell, another individual facing federal charges for Jan. 6. 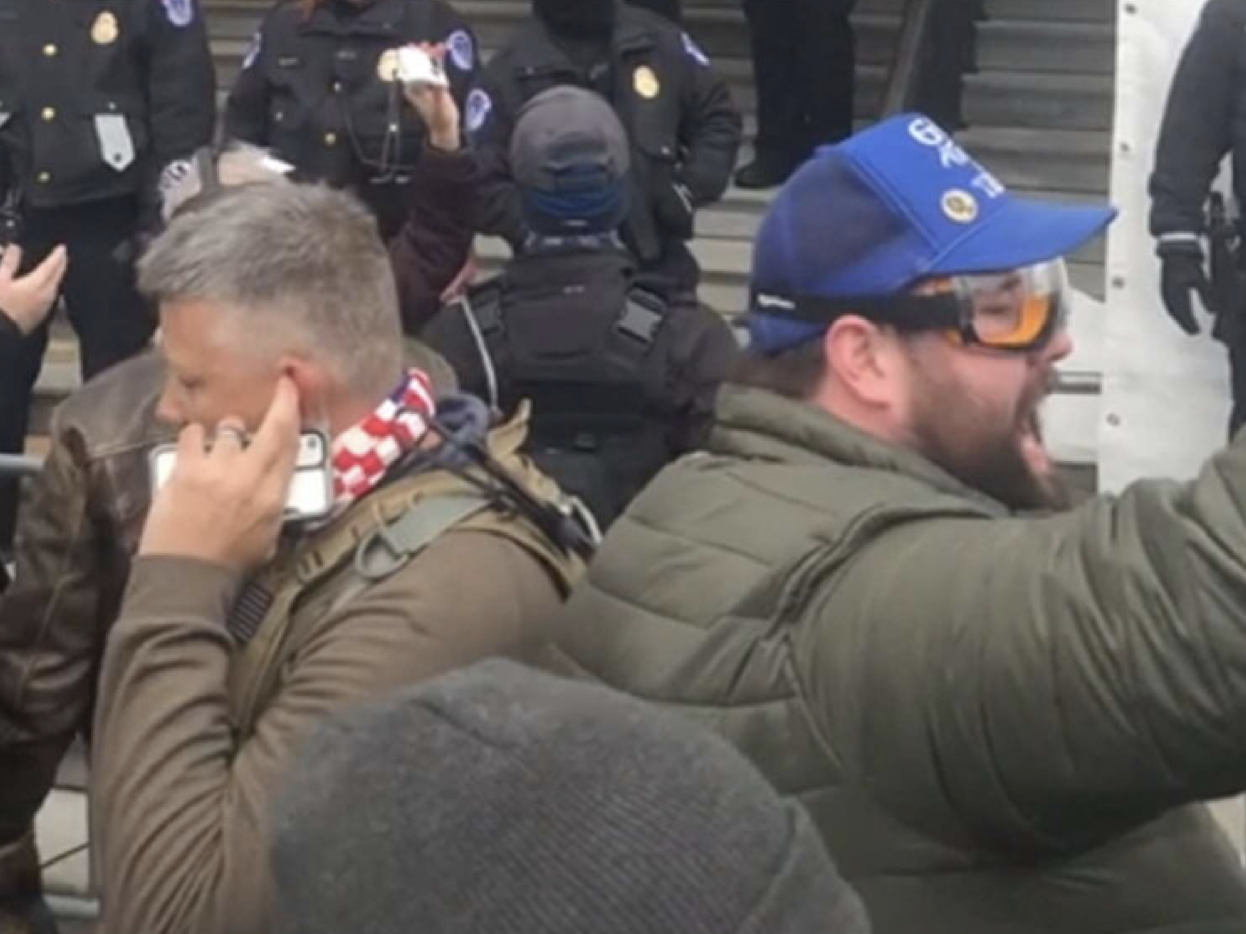 Christopher Worrell stands next to a shouting “Milkshake.”

The FBI said this photo appears to have been taken before the mob breached the line of police officers pictured in the background.

“Other images from open-source websites show this same individual on U.S. Capitol grounds, just outside the Capitol on the lower west plaza. This area is on the U.S. Capitol grounds under 40 U.S.C. § 5104(e) and is within a restricted building or grounds under 18 U.S.C. § 1752. SCOTT is identifiable based on his blue hat with a pin and white lettering; black goggles with yellow/orange trim; olive green jacket; and facial hair and general appearance. Behind SCOTT is a line of law enforcement officers standing on steps leading to the Capitol building,” documents say. “That same line of law enforcement officers, in that same location, was later breached by the crowd.”

According to the Department of Justice, Scott has been charged with several federal crimes, including for assaulting police, obstructing Congress, and engaging in violence on Capitol grounds. The charges:

Knowingly Entering and Disorderly Conduct in any Restricted Building or Grounds;

Knowingly Engaging in Act of Physical Violence in any Restricted Building or Grounds;

Disorderly Conduct and Act of Physical Violence on Capitol Grounds;

Assault on a federal officer with physical contact and intent to commit another felony.