‘We Are Armed and Nearby Your House’: Man Who Believed Trump Won Allegedly Threatened New York Congressman’s Family (Update) 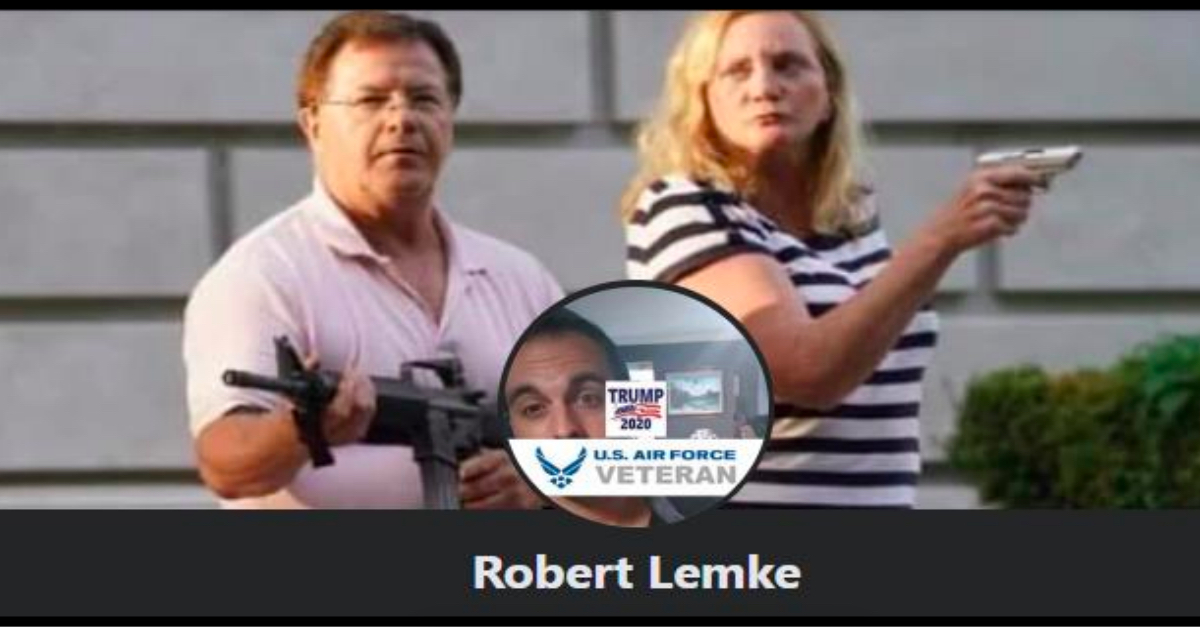 A man who officials say falsely claimed to have been a U.S. Air Force Captain and retired police sergeant with the Alameda County Sheriff’s Office was arrested by federal authorities Tuesday morning for allegedly making a series of threats against the family of a New York congressman who did not support former President Donald Trump’s false claims that he was the true winner of the 2020 election.

According to a criminal complaint unsealed in the Southern District of New York on Tuesday, Robert Lemke, 35, sent several text messages to the unnamed east coast lawmaker’s family on Jan. 6, the same day that Trump supporters stormed the U.S. Capitol Complex with members of Congress still inside sheltering in place.

“Your brother is putting your entire family at risk with his lies and other words. We are armed and nearby your house. You had better have a word with him. We are not far from his either. Already spoke to [Congressman-1’s son] and know where his kids are,” Lemke allegedly said to the congressman’s brother via text message. The messages also included a photo of a house in the same neighborhood where the congressman’s brother lived.

“[Y]our words have consequences. Stop telling lies; [Joe] Biden did not win, he will not be president. We are not[] white supremacists. Most of us are active/retired law enforcement or military,” he added, possibly referring to the Oath Keepers or another right-wing militia group. “You are putting your family at risk. We have armed members near your home . . . . . Don’t risk their safety with your words and lies.”

Lemke is also accused of sending messages to the congressman’s sister-in-law, telling her to calm her husband down and claiming that two were being spied on.

“We saw on the hidden camera, he was quite stirred up. You need to have him talk with [Congressman 1]. Thanks,” the message said.

Rep. Hakeem Jeffries (D-N.Y.) later confirmed that he was the unnamed congressman. Subsequent news stories also said that there was no evidence that Lemke ever served in the Air Force or worked in the Alameda County Sheriff’s Office. Per NBC:

However, the Air Force had no record of a Robert Lemke matching his description ever having served, the Pentagon said Tuesday afternoon.

The FBI contacted the Alameda County Sheriff’s Office earlier this month about Lemke and agents were told no one of that name had ever been employed by the department, Sgt. Ray Kelly told NBC News.

“That man never worked here,” Kelly said. “I talked to the FBI weeks ago. He made it up. It’s like me saying, ‘I worked at NBC with Tom Brokaw.'”

Though Lemke did not attend the Jan. 6 insurrection at the U.S. Capitol, a catalogue of his social media posts provided in the charging document made clear that he had fully bought into the false conspiracy theory that Democrats stole the election from Trump.

“Folks. Be ready for war. Trump has refused to cede. Evidence shows fraud occurred and the Supreme Court cases will be successful,” he wrote in a Nov. 7 Facebook post, per the complaint. “We blockchained and watermarked ballots in 16 states. Trump will prevail.. Spread this message. . . . FAITH my fellow Republicans. Do not give up. Keep an eye out for a variety of protests, and Stop The Steal Facebook groups for updates.”

The charging document also noted that the background of Lemke’s Facebook page displayed a small photo of Lemke’s face partially covered by the words “Trump 2020” atop a large background photo of Mark and Patricia McCloskey, the St. Louis attorneys who were criminally charged after pointing guns at Black Lives Matter protesters outside of the last summer.

Lemke is also alleged to have sent threatening messages to the unnamed relative of a journalist, which said: “[The Journalist’s] words are putting you and your family at risk. We are nearby armed and ready. Thousands of us are active/retired law enforcement, military, etc. That’s how we do it.”

“As alleged, Robert Lemke was dissatisfied with the results of the 2020 Presidential Election and subsequent statements about the election made by a U.S. Congressman and journalist. Rather than peaceably disagree, Lemke allegedly threatened to harm those individuals’ families, demanding they retract their statements,” acting Southern District of New York U.S. Attorney Audrey Strauss said in a statement. “The electoral process is the essential mechanism through which our democracy functions. While in any election it is inevitable that some will be disappointed in the result, threats of violence cannot and will not be tolerated.”

Editor’s note: this story was updated post-publication to reflect that the Pentagon and Alameda County Sheriff’s Office both said that, contrary to the defendant’s claims, there were no records of Robert Lemke serving in the Air Force or being a police sergeant.