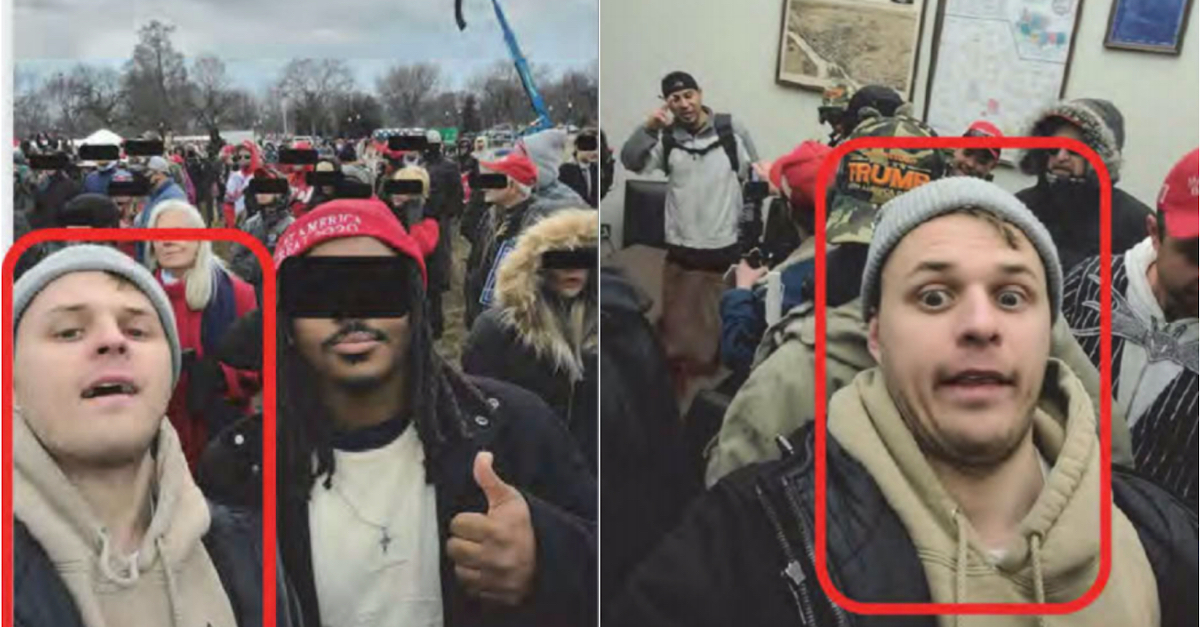 Embedded in an FBI affidavit, the photos of accused U.S. Capitol rioter Karol Chwiesiuk circle the suspect in red.

In the lead up to Jan. 6th, a Chicago police officer received several messages from a longtime friend warning him away from the U.S. Capitol. One text colorfully reminded him that Donald Trump was defeated (“Fat man child lost”), and another message informed him about the “1-65” losing streak that Rudy Giuliani,  “Kraken” lawyer Sidney Powell and other pro-Trump allies racked up in court.

Chicago officer Karol Chwiesiuk, 29, didn’t listen, and as a manhunt for the rioters ramped up about a week later, the Windy City cop wrote back to the same friend friend: “N***a, don’t snitch,” prosecutors said in court papers unsealed on Friday.

Chwiesiuk’s criminal complaint, which leaves the use of the N-word uncensored, charges him with knowingly entering a restricted building and disorderly conduct on Capitol grounds.

The FBI’s affidavit catalogues a series of messages with a friend prosecutors say Chwiesiuk kept in contact with for more than a decade.

Though the person’s identity is known to authorities, court papers identify the friend only as the phone’s “SUBSCRIBER,” and the back-and-forth begins with Chwiesiuk apparently announcing three days before the siege about his intention to go Washington to “save the nation.” 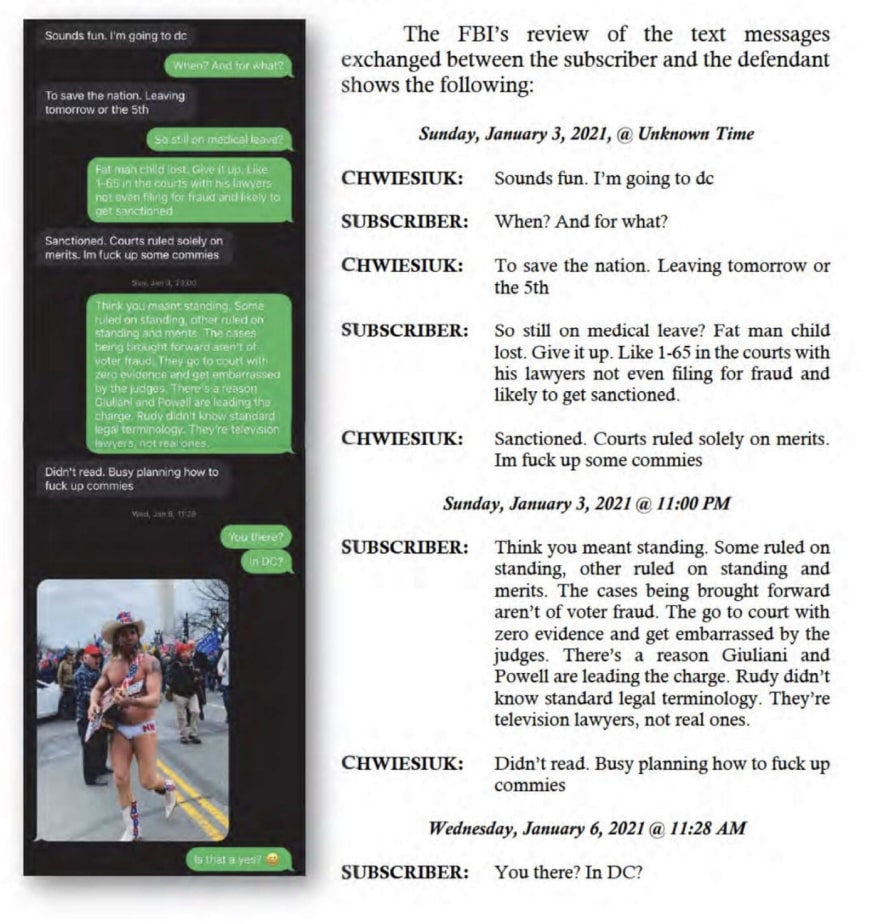 SUBSCRIBER: When? And for what?

CHWIESIUK: To save the nation. Leaving tomorrow or the 5th

SUBSCRIBER: So still on medical leave? Fat man child lost. Give it up. Like 1-65 in the courts with his lawyers not even filing for fraud and likely to get sanctioned.

In this exchange, Chwiesiuk appears to be botching a pro-Trump talking point that the staggering series of losses by the then-president and his allies did not count because courts dismissed the cases on standing grounds, without reaching the merits.

That was never true: Some courts threw out the cases for procedural deficiencies, including standing, and other judges considered the merits of the case, before rejecting them as meritless.

When the conversation picked up again on Jan. 3, the well-informed friend appeared to be setting Chwiesiuk straight—with some additional digs at “television lawyers” Giuliani and Powell. Chwiesiuk allegedly replied, “Didn’t read”:

SUBSCRIBER: Think you meant standing. Some ruled on standing, other ruled on standing and merits. The cases being brought forward aren’t of voter fraud. The go to court with zero evidence and get embarrassed by the judges. There’s a reason Giuliani and Powell are leading the charge. Rudy didn’t know standard legal terminology. They’re television lawyers, not real ones.

CHWIESIUK: Didn’t read. Busy planning how to fuck up commies.

According to prosecutors, Chwiesiuk continued to regale his friend about his exploits at the Capitol that day, forwarding photographs from D.C. of the Naked Cowboy and a Black man wearing a MAGA hat. 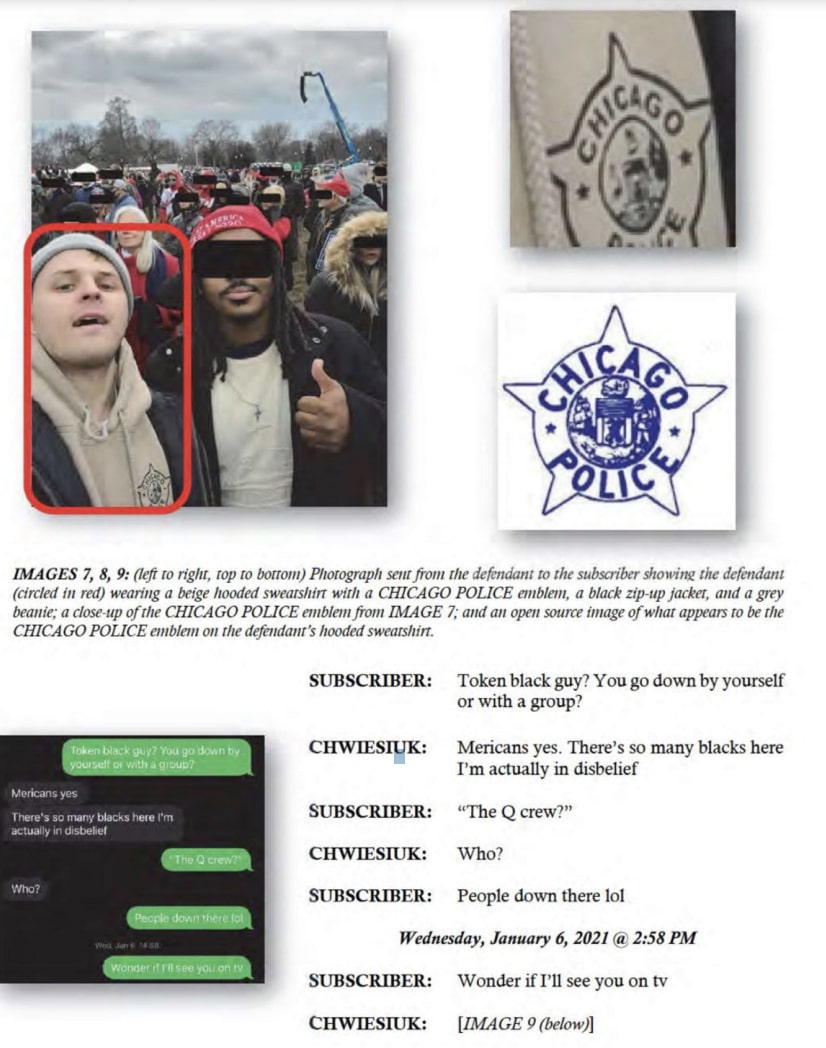 “Token black guy?” the friend scoffed, according to the affidavit. “You go down by yourself or with a group?”

There is no mention of that in any of the quoted exchanges.

Authorities say that Chwiesiuk is “currently” employed as a Chicago police officer and received an email from Ali Alexander, a Black far-right organizer of the so-called Stop the Steal rallies.

“Tomorrow is going to be a historic day in Washington DC,” the subject line of the quoted email reads.

Once inside the Capitol, Chwiesiuk took a selfie in the office of Sen. Jeff Merkley (D-Ore.), prosecutors say. 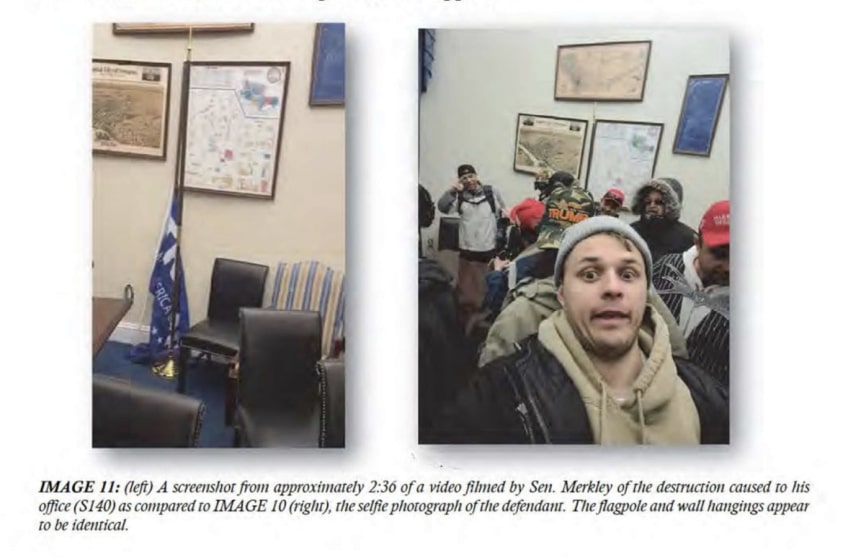 Read the 19-page criminal complaint and affidavit below: