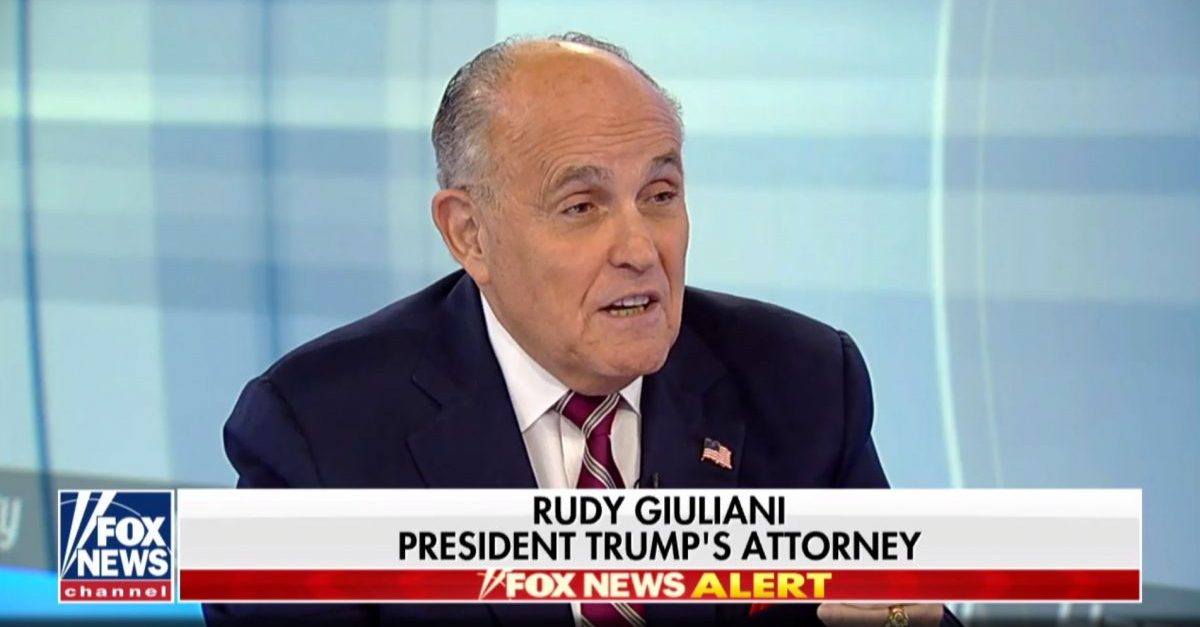 Before Tuesday, Rudy Giuliani last registered an appearance in the U.S. federal judiciary in 1992, and in the view of many legal observers, it showed. The former mayor of New York flubbed basic concepts of law and, in at least one instance, displayed a poor command of the English language.

Giuliani confessed that he did not know the word “opacity,” applying the Bizarro World definition that it “probably means you can see.”

When pressed by the judge on what standard of scrutiny should be applied to Pennsylvania government’s action, Giuliani replied: “The normal one.” Listen to that moment here:

The response inspired widespread derision from the legal community, where attorneys and others knew the answer exposed the Trump lawyer as unfamiliar with rational basis review, intermediate scrutiny, and strict scrutiny.

Giuliani even acknowledged, later in the hearing, that he did not know what strict scrutiny meant.

After an opening-statement rant alleging electoral shenanigans that appeared more fitting for the right-wing airwaves than a federal courtroom, Giuliani took a backflip some hours later and conceded to the judge: “This is not a fraud case,” becoming the second attorney for the Trump campaign to use that precise series of words. At least four Trump lawyers have told as many judges that they are not alleging voter fraud.

Judge Brann called off a hearing initially scheduled for Thursday to hear that evidence, finding there was no need to scrutinize what the campaign is not alleging.

For the Trump faithful, this cavalcade of bloopers showed Giuliani’s singular legal acumen.

“I heard from more than a few people that he was absolutely brilliant in his arguments today,” said Sean Hannity, the Fox News opinion host and former client of Trump’s fixer Michael Cohen. (Fox News disputed the open-court statement by Cohen’s counsel identifying Hannity as a former client following the publication of this article. “I have occasionally had brief discussions with [Cohen] about legal questions about which I wanted his input and perspective,” Hannity acknowledged at the time, denying formal representation.)

“You media morons are all laughing at @RudyGiuliani, but he appears to have already established a great rapport with the judge, who is currently offering recommendations on martini bars for Team Trump in open court,” Ellis said, highlighting Giuliani’s connection with a Barack Obama-appointed federal judge.

Trial lawyer Katie Phang, a legal contributor for NBC and MSNBC, snarked in response: “You don’t get out much, do you?”

You don’t get out much, do you?

It is not unusual for federal judges to banter with lawyers in their courtrooms and engage in cordial small talk, which is usually not seen as a sign of imminent legal victory. Brann’s dining and drinking recommendations, which also involved a brewpub, were directed to both parties and showcased small businesses in his 140,000-population city.

“His rhetoric was just over the top,” Aronchick told Law&Crime. “The one time he had a Mafia reference to some Philadelphia election workers. Other times, it was a select group of Democrats that got together in different parts of the state somehow. There was just lots and lots of allusion and exaggeration and hyperbole and smear.”

Then, of course, came the backpedal.

“He finally said to the judge: ‘This isn’t about fraud,'” Aronchick noted, emphasizing Giuliani’s status as Trump’s “top lawyer in the campaign.”

Aronchick called Giuliani’s about-face inevitable from the moment he stepped into federal court.

“It’s one thing to spout off in the parking lot of Four Seasons Total Landscaping, or to tweet about a lot of things,” he said. “It’s another thing when you’re a lawyer, an officer of the court, and you have to go into that court and present your case and answer questions to a judge.”

“And I think—and I hope—that the American public understands the greatness of our judicial system, the jewel that we have because when you actually have to go to court and answer questions as an officer of the court, you have to tell the truth,” he continued.

Aronchick noted that Giuliani retreated from the fraud claims upon questioning by a judge.

“That speaks volumes about our judicial system, about its independence,” he added. “I think it’s very important that people understand that.”

Judge Brann has not yet issued his ruling.