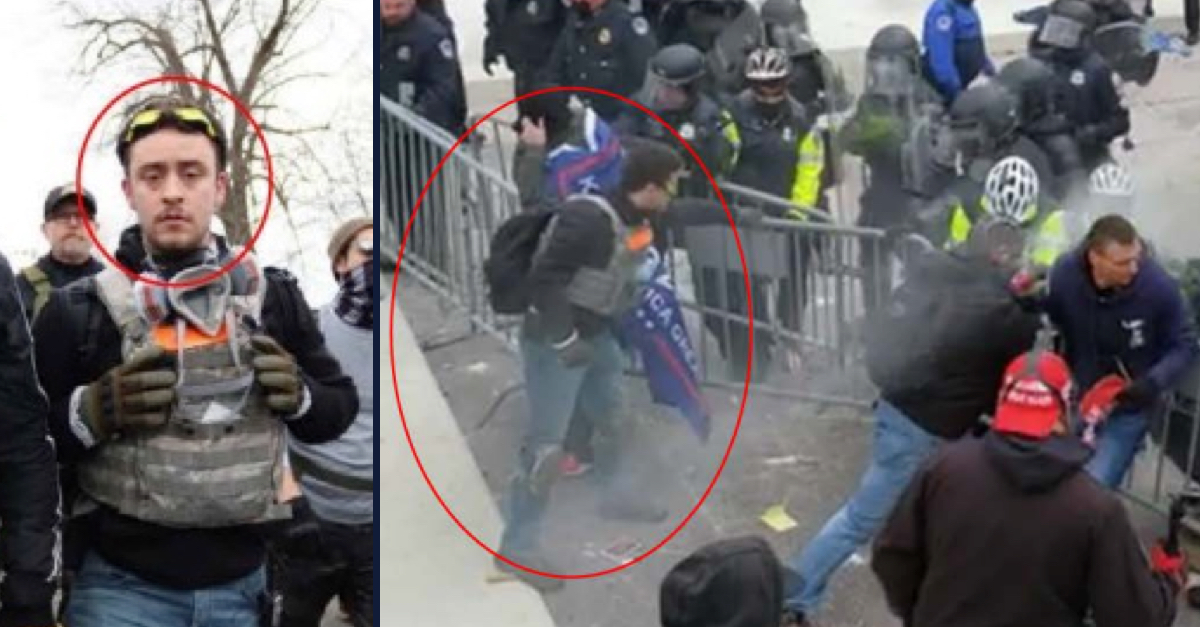 A Kansas man and member of the far-right Proud Boys extremist group has pleaded guilty to a misdemeanor for the Jan. 6 attack on the U.S. Capitol.

Ryan Ashlock, 23, appeared before U.S. District Judge Timothy Kelly on Tuesday and admitted that he had gone where he wasn’t supposed to be that day. He pleaded guilty to unlawfully entering and remaining on restricted grounds, a misdemeanor.

While the charge carries a potential one year jail sentence and $100,000 fine, the plea agreement estimates that Ashlock will likely face a maximum of six months in jail and a potential fine of up to $9,500.

The plea agreement also includes a cooperation clause, although it’s not clear to what extent Ashlock is expected to assist the federal government’s ever-expanding investigation into the events of that day, when thousands of Donald Trump supporters descended on the Capitol, pushed past police, and ultimately forced Congress to temporarily stop certifying the results of Joe Biden‘s 2020 electoral win.

The plea agreement contemplates only that Ashlock will let law enforcement look at his social media accounts for postings in and around Jan. 6, and will submit to an interview with investigators “regarding the events in and around” Jan. 6 ahead of sentencing.

According to the Statement of Offense, which outlines the facts that form the basis of the charge to which he is pleading guilty, Ashlock and some of his co-defendants—including Christopher Kuehne and Louis Enrique Colon—shared their plans for Jan. 6 via text messages. They spoke of bring radios, medical supplies, and weapons to Washington D.C. in support of Trump.

“[W]e will be headed back on the 7th, either to prepare for war or celebrate a trump [sic] victory,” someone posted to the group.

Ashlock admitted that he and Kuehne, Colon, and c0-defendant William Chrestman, along with others not identified in court documents, drove from Kansas City to the Washington, D.C. metropolitan area on Jan. 4, 2021. Prosecutors note that Ashlock had a handgun with him on the trip, but didn’t bring it into the D.C. itself.

Prosecutors also note that Kuehne brought two “AR-15 or similar assault rifles,” but he similarly didn’t bring those into the district.

Ashlock and his co-defendants traveled from Arlington, Virginia, to D.C. in the early morning hours of Jan. 6. It’s unclear from the Statement of Offense whether they attended Trump’s so-called “Stop the Steal” rally, where Trump urged his supporters to march to the Capitol and pressure then-Vice President Mike Pence and lawmakers to overturn the election results, but they headed to the Capitol in any case, chanting slogans such as “Whose streets? Our streets,” and joining up with co-defendants Felicia Konold and Cory Konold along the way.

Upon arriving at the west side of the Capitol, Ashlock and his co-defendants “observed others fighting with the police officers at the barricades and the gathering crowd push past the officers” on to Capitol grounds.

“Defendant, who was equipped with body armor, goggles, a filtered breathing mask, and a chemical irritant spray, proceeded over the toppled barricades and moved towards the Capitol’s West Plaza where he attempted to prevent the police officers from using force against others in the crowd,” the Statement of Offense says. “Defendant also attempted to prevent officers from pushing a barricade forward and was sprayed in the face with chemical irritant.”

Ashlock left the area soon thereafter. He is not accused of breaching the Capitol building itself.

He did, however, remain defiant about his participation in the riot, texting a family member on who expressed concern that day about the Capitol violence: “F[xxx] all these p[xxx]y liar politicians. Trump should have them all executed.”

He apparently remained convinced of his cause days later, texting a group that “America needs a civil war.”

“The government can’t win one and the rest of the world goes into chaos with us,” Ashlock added, according to the Statement of Offense.

Ashlock, who prosecutors describe as a “first-degree member” of the Proud Boys, is the second among his co-defendants to plead guilty; in April, Colon, 45, pleaded guilty to obstructing law enforcement officers during a civil disorder. Colon admitted to using his hands and a chair to stop a retractable door at the Capitol from closing—a door that likely would have kept rioters from breaching the building. As part of his plea, Colon is cooperating with the government.

The Proud Boys—a right-wing extremist organization with ties to white nationalism—are believed to have played a crucial role in the violence at the Capitol that day, according to the House committee investigating the Jan. 6 siege.

Ashlock’s plea deal means that the significantly more serious charges against him, including conspiracy, obstruction of an official proceeding, and threatening a federal officer, will be dismissed when he is sentenced.